Thirteenth Sunday in Ordinary Time: The inside story 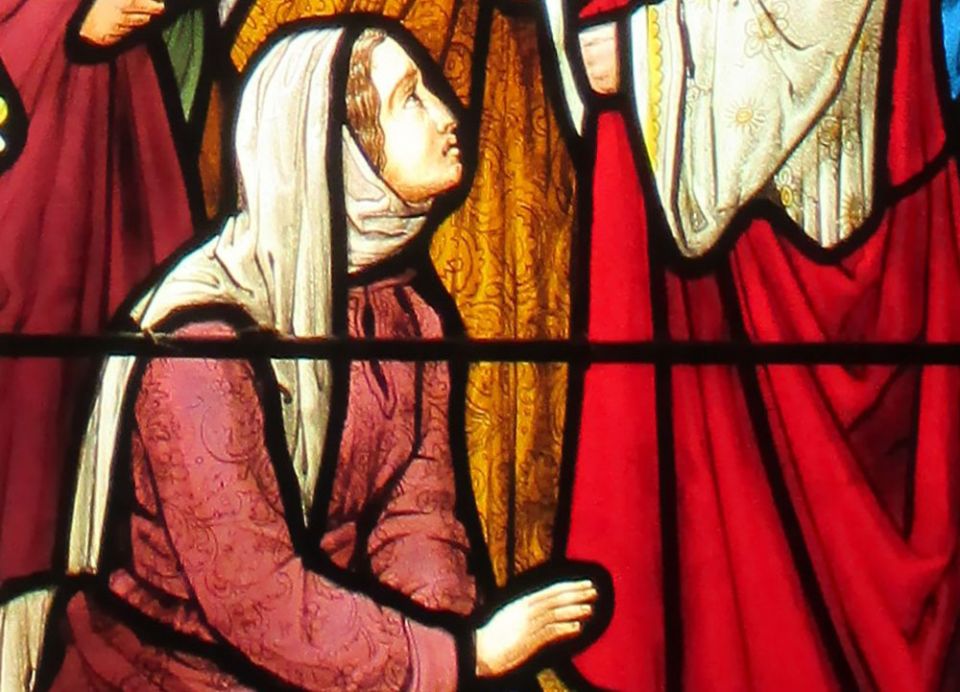 Today, we meet two women, one just entering her womanhood, the other older than her years for all she had suffered. The young one had a powerful father to advocate for her. The latter, anonymous and shamed by her condition, seemed caught between the need to hide and her drive to flourish.

Jairus, the father of the 12-year-old, fell before Jesus begging him to lay hands on his daughter. The older woman stole up behind Jesus, convinced that any contact with him would suffice to heal her.

It's rare that the Gospels so obviously place one complete story inside another, but Mark recorded these incidents this way, and Matthew and Luke followed suit. In larger inclusions, such as the healing of blind people in Mark 8 and 10, the difference in the two stories illuminates the material in between them. Here, the story of the woman takes center stage as a subtle commentary on the other.

In the incident with Jairus' family, everything was clear: Jesus took the young woman by the hand, told her to rise, and she got up. Jesus fulfilled Jairus' request. This is reminiscent of Mark 2 when some men dismantled a roof to position their paralyzed friend in front of Jesus. In both cases, the petitioners went to great lengths to call Jesus' attention to someone in desperate straits.

The Jairus story was simple and clear, complete without the interruption of the woman with a hemorrhage. Nevertheless, the Gospel presents this audaciously hopeful woman inside Jairus' story. What does Mark want us to see in this woman?

Despite our translation, Mark did not use the term "affliction" to describe the woman's physical condition. He simply reported that she had hemorrhaged for 12 years. According to Mark, her suffering came at the hands of the physicians who drained her finances while her condition only grew worse on the physical, social and religious levels. (Her physical problem made her ritually unclean, a condition that negated her right to enter the temple and required her to remain apart from society.)

But one day, she heard about Jesus. Some novice evangelizer led her to believe that there was hope. Unlike the paralyzed man or the little girl, who each had their advocates, she took matters into her own hands — literally.

Maybe someone had told her that the Book of Wisdom teaches that God formed human beings to be imperishable, imaging the divine nature. Perhaps she had the insight of a mystic.

No matter the reason, she put more faith in Jesus and the God of life than in the ritual restrictions she was supposed to observe. Whatever she had heard about Jesus affirmed her resolve and led her to trust that he would not be offended if she transgressed rules in pursuit of fullness of life.

She reached out in hope of healing and never could have imagined Jesus' response. Not only was he aware that a touch of great significance had occurred in the midst of jostling, but when she presented herself to him, he addressed her as "daughter," claiming a relationship with her that he attributed to no other — neither woman nor man. Using that name, Jesus effectively adopted the role of being her father-advocate, implying that her faith in him and the God of life created a unique bond between them.

None of the evangelists tell us of Jairus' fear and impatience while Jesus halted to interact with the woman. Nor do we know how Jairus later understood the events of that afternoon or what he explained to his daughter. But while Jairus was suffering anxiety about his child, Jesus drew attention to the woman who was a living parable of faith in action.

This woman, known to us only as "daughter," was Mark's equivalent of the people for whom Jesus prayed in John's Last Supper narrative (John 17:20). She believed in him before she saw him. She encountered Jesus, the encounter changed her life, and she gave witness to that in front of everyone.

At the end of their dialogue, Jesus summarized a theology of prayer in the three things he said to the woman: Your faith has saved you, go in peace, and be whole (cured).

While some might approach prayer as if ordering from a menu, the purpose of prayer — be it petition, praise or penitence — is to bring us into an encounter with the God of life who desires the encounter more than we do. Whether we begin by begging God for help for another or from our own need, the real point of the prayer is encounter with God — and all that results from that. The inside story is simply that faith leads to action that generates greater faith.

Column | Thirteenth Sunday in Ordinary Time: The inside story

As we face this abuse crisis, be prophetic and speak out