Seeds of the Gospel in cinema 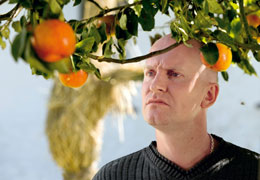 The idea of cinema divina -- that is, sacred viewing -- first crossed my spiritual path in 1991, when I read an article in the Review for Religious by Benedictine Fr. Benedict Auer: “Video Divina: A Benedictine Approach to Spiritual Viewing.” He wrote, “Video divina requires a set disposition which says, ‘This evening, I wish to get closer to God, so I think I’m going to watch this film, which might give me better insights into myself or why my neighbor acts as she or he does.’ ”

Auer takes his cue from a fellow Benedictine, Matthias Neuman, who in 1977 in the Review for Religious expanded the meaning of lectio from the printed text to finding God in contemporary media stories: “Beyond the written word, the giant visual image of the modern movie screen may provide the impetus for an authentic lectio.”

In 2000, film producer Frank Frost and Fr. Michael Mannion of the Trenton, N.J., diocese were at a party in Washington and over drinks came up with the idea of the National Film Retreat. I was asked to be part of the retreat team, and for the next 10 years these thematic retreats drew dozens of people who love film, scripture and spirituality to “give the retreat” to one another through conversations held after each screening.

This year, for the first time in the history of the U.S./Toronto province of my congregation, the Daughters of St. Paul, we offered the sisters an opportunity for a directed, silent cinema divina retreat. Taking the Gospel of each day as the point of departure, we chose films with similar themes and followed the schema of the traditional lectio for personal reflection, prayer, direction and group sharing. The group dynamic aspect didn’t work for everyone, and some found the encounter with the director enough. Responses to the retreat were positive and we plan on doing this again.

Our iter is as follows:

When we gathered to share God’s Word broken open in the film, we considered these questions: What moment in the film chose you? What is your emotional response? What are your observations, connections and spiritual questions?

Day four was a desert day. On the last day we gathered to speak about the strong moments of the retreat for each one as an opportunity for integration before a final liturgy and closing with dinner.

The seven films we programmed over eight days that offered us an authentic experience of cinema divina were:

I believe that many films touch our humanity and this creates a spiritual connection. People may not agree, of course. Intelligent people can and do disagree on what makes for a “good” film and a film that works on a spiritual level.

A few years ago someone at a retreat brought up the John Patrick Shanley film “Joe Versus the Volcano.” She loved the quirky story, but the retreat director vehemently disagreed. It is the story of a world-weary man (played by Tom Hanks) who is a hypochondriac. An exasperated doctor finally tells him he has a brain cloud, that it was terminal, and that all he could do was live the rest of his life to the fullest. The man ends up dancing on the rim of a volcano with the love of his life.

Some time later I was speaking at a religious education convention and told this story about how people can interpret films very differently. A young woman shared that for her and her husband, “Joe Versus the Volcano” was their favorite movie. She explained that when her husband was 9 years old, he tried to kill himself. He got help. A couple of years later he and his mother went to see this film together. As they came out, he turned to her and said, “See, Mom? That was me. I had a brain cloud. And I don’t have to die.”

I would love to be the screenwriter who saved the life of even one child. The story of Joe and his brain cloud connected with this child on so many levels, but not necessarily with others.

On the whole, I believe that there are seeds of the Gospel in a significant percentage of mainstream film releases. And if we approach films in anticipation of authentic lectio, they can create a spiritual experience -- cinema divina indeed.

Spirituality | Seeds of the Gospel in cinema