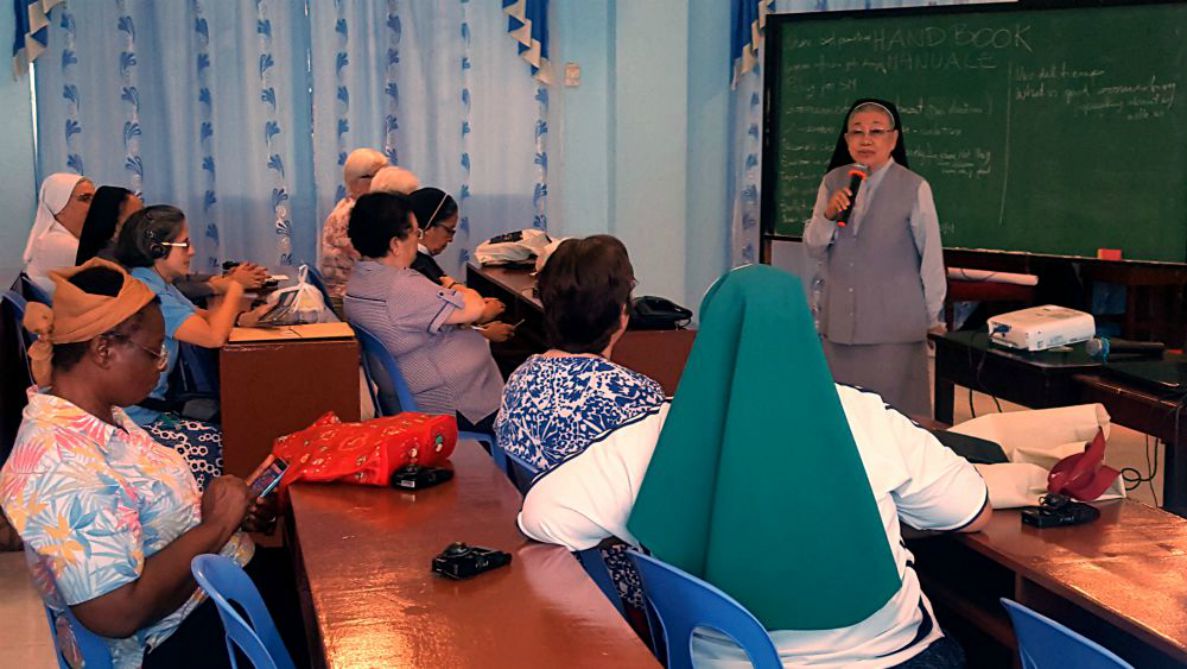 Sr. Crescencia Lucero, a member of the Franciscan Sisters of the Immaculate Conception of the Holy Mother of God and part of the Association of Major Religious Superiors in the Philippines speaks to the International Union of Superior Generals, which met in the Philippines in November. (NCR photo/Gail DeGeorge)

"Lola" (Grandmother) Remedios, or Remy, 86, has been caring for her seven grandchildren after their father was killed by police Dec. 6, 2016, in the country's ongoing drug war.

In the community near Payatas, known for being the site of the country's second-largest garbage dump, Remy insisted on signing a contract to repay a $100 working capital loan that the local parish extended so she could start a small business to sell vegetables and fruits to support her grandchildren.

Her strength and resolve was one of several stories about the families of those killed in the Philippines' war on drugs recounted by Fr. Danny Pilario, a theology professor at St. Vincent School of Theology of Adamson University, who has ministered on weekends at the Ina ng Lupang Pangako Parish in Payatas Barangay (ward), Quezon City, for the last 15 years.

The Philippines was the focus of media attention this past week as world leaders gathered in Manila to discuss trade, security and other issues during the Association of Southeast Asian Nations meetings. In the days leading up to the high-profile summit, Philippines and international media highlighted the issue of the country's drug war, a crisis that Pilario knows personally.

In a homily on Nov. 9 before more than 60 sister leaders and guests at the International Union of Superiors General (UISG) meeting, Pilario made clear through a photo presentation the toll of the government-sanctioned drug war that the Catholic Church, other religious leaders and human rights officials have called a war on the poor.

When the police operatives came to visit Remy's son, Juan* and his wife for the first time, Juan, who was on the list of drug users, was at his job as a gas station attendant in Manila. The police arrested Juan's wife instead. She is still in jail.

Juan was cooking dinner for his daughter's birthday when the police burst into the house and shot him point blank because his name was on the list of drug offenders, Pilario said.

"He pleaded for his life and he said 'please don't kill me, I have seven children' but the police wouldn't listen and killed him," he said.

Remy said after killing Juan, the police officers placed the gun at his right hand and a bag of illegal drugs on his left and took a picture. The police said that Juan fought them. 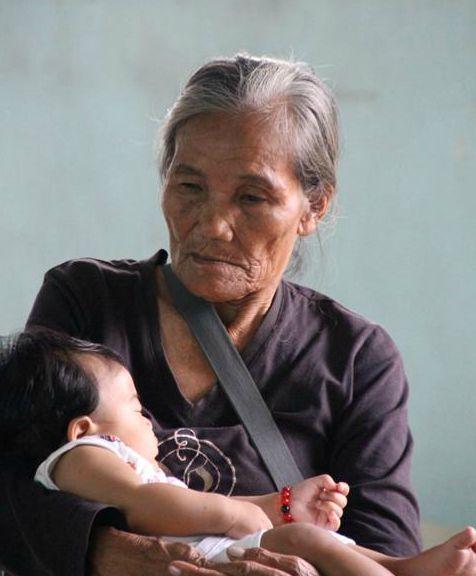 "Lola" (Grandmother) Remedios, 86, cradles the youngest of her seven grandchildren. The baby's mother is in jail; the father, Juan, Remedios' son, was shot and killed by police in December 2016. (Slide provided by Daniel Pilario)

"I asked her how do you feel, and this I will never forget," Pilario said. "She told me, 'Father, they want us dead — no, we will not give them that joy. We will live.' "

Most of the scavengers in the Payatas district earn about $5 to $7 a day, Pilario said. The dump is scheduled to be closed because it is becoming unsafe. The dump is declared as one of the centers of the war on drugs by Philippine President Rodrigo Duterte, who took office in June 2016.

President Donald Trump praised Duterte's drug war program in his first phone call to the Philippine president earlier this year, according to a leaked transcript. Despite criticism by human rights officials, Trump did not publicly criticize Duterte over the issue during his visit to the Philippines, Nov. 13.

In Payatas, an estimated 100 local residents have been killed, though Pilario says the local church can account for only 50 and is caring for about 25 or 30 mothers and widows whose sons or husbands have been killed.

One of the widows is Jessa, 20, whose 21-year-old husband was killed in January while they slept. She was totally devastated and for a month afterwards, could not speak about it, Pilario said. She has since applied for and gotten a job at a gasoline station, determined to live for her child.

"These are strong women who are doing their best to pick up the shattered pieces of their lives," he said. Referring to the John 2:13-22, when Jesus speaks of destroying the temple and raising it in three days, he said, "Despite the deaths, these families are rising up."

Religious men and women are called to rise with them, he said, citing Pope Francis' frequent reminders of the responsibility to serve the poor. "Our community life, our church life, can only be possible when it is immersed in the lives and struggles of the poor," he said.

Widespread poverty of the Philippines — official government statistics put it at 21.6 percent for the overall population, though some sectors are much higher — is a fundamental problem in the country, Sr. Crescencia Lucero of the Association of Major Religious Superiors in the Philippines (AMSRP) told the UISG meeting participants at a briefing on Nov. 8. Control of the economy by the wealthiest families and multinational corporations has hindered efforts to significantly relieve poverty.

Fr. Daniel Pilario showed photos of the survivors of the victims of the government's war on drugs in a homily before the International Union of Superior Generals. (NCR photo/Gail DeGeorge)

During the recent drug war, congregations throughout the Philippines have responded to the crisis by opening convents, seminaries, facilities and offering services to victims whose rights are violated and lives are at risk, said Lucero, who is head of the religious superiors' Justice, Peace and Integrity of Creation Commission and a Franciscan Sisters of the Immaculate Conception of the Holy Mother of God.

The Association of Major Religious Superiors in the Philippines pledged at its convention in July 2016 to cooperate with Duterte in enacting social reforms he had promised during his campaign. "But this war on drugs has become really a terrible massacre of the poor," she said.

The congregations care for some, including children, who have been injured in, or have witnessed, police raids and drug-related shootings. In addition to helping them with the trauma and physical healing, the congregations try to find lawyers to help them seek justice, she said. 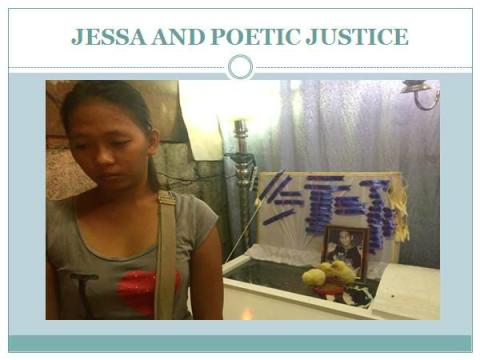 Jessa, 20, was traumatized after her husband, who was 21 years old, was shot and killed at dawn. She is raising their child alone. (Slide provided by Daniel Pilario)

The night watches usually begin about 8 p.m. At some wakes there will be two coffins, sometimes three or as many as five. The watches often last until the early hours of the morning.

"This is what is needed now in our country and glad that AMSRP has come up with this prophetic stance to be with the victims, the families, the survivors," she said. "We are giving hope, sharing the love and mercy and compassion of our God."

Dioceses and some communities are also implementing rehabilitation programs and monitoring graduates to help ensure they remain free of drugs, she said.

The Catholic Bishops' Conference of the Philippines is calling for a widespread prayer vigil, building off an earlier campaign that started in September in the wake of the killing of three young boys, victims in the drug war.

On Nov. 5, Archbishop Socrates Villegas, president of the Catholic Bishops' Conference of the Philippines, celebrated a special Mass to launch a new 33-day prayer period through Dec. 8, the Feast of the Immaculate Conception, to start the "healing process" in the country.

* To protect privacy, no last names of families affected by the drug war are being used in this story.

[Gail DeGeorge is editor of Global Sisters Report. Her email is gdegeorge@ncronline.org. Follow her on Twitter @GailDeGeorge.]