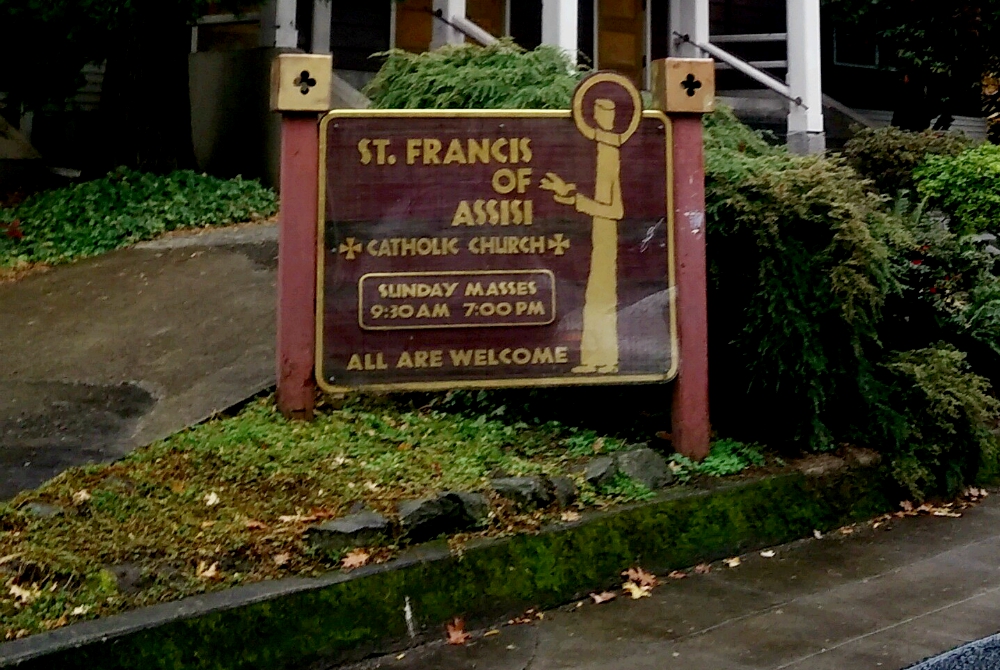 A sign welcomes all to St. Francis of Assisi Church in Portland, Oregon. (Peter Feuerherd)

Editor's note: In 2020, NCR will examine Catholic church life across the United States, examining the struggles and successes of parish ministry. This story on St. Francis of Assisi Church in Portland provides a preview.

Tuesday noon Mass at St. Francis of Assisi Church here includes a congregation of two, counting a visiting reporter. In a city infamous for dreary weather, this November day features a slow drizzle that dampens the sidewalks and the ancient radiator of the church signals with a wheeze the slow approach of winter.

Fr. George Kuforiji smiles and welcomes the tiny congregation. In his homily, he notes it is the feast of St. Josaphat, from what is now modern Ukraine, who attempted to bring Orthodox Christians and Roman Catholics together in the 17th century.

Kuforiji, in the accent of his native Nigeria, described Josaphat as a mediator, who generated opposition from all sides, attempting to preserve Byzantine worship under the auspices of Rome.

"He wanted that unity to be among the people," he said.

At this church on the city's East Side, where gleaming new apartment buildings rise across from a small park that provides a gathering place for the homeless, an intractable Portland concern, unity remains an elusive concept. 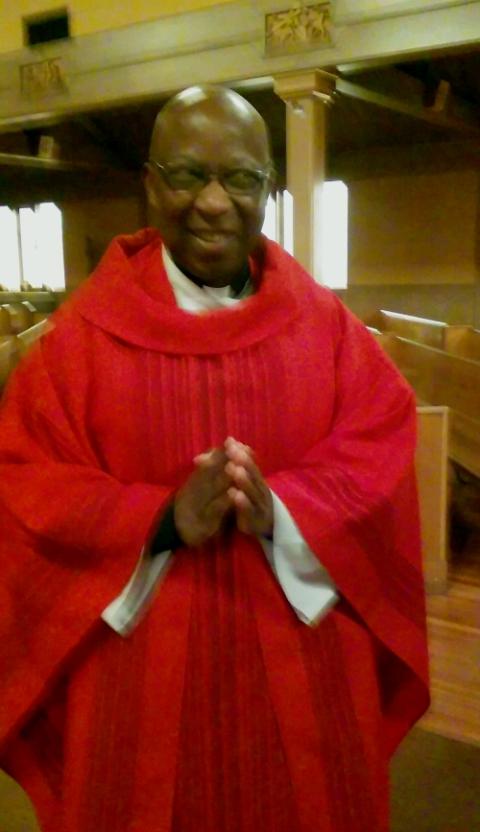 Kuforiji, 68, is a civil engineer who formerly worked with the state of Oregon. He experienced a late vocation to the priesthood and was educated at Sacred Heart Seminary in Hales Corner, Wisconsin. The priest came to St. Francis a year ago, in his second assignment after his ordination. He soon became embroiled in a long dispute over issues such as the role of creativity in liturgical rites and the future of St. Francis Kitchen, the outreach to the homeless long affiliated with the parish.

The pastor has been hailed as a hero by traditionalist groups such as Church Militant, who see in him a crusader against what they describe as hypocritical Catholics who don't follow the church's rubrics. They have accused his critics of racism. Regular references in the traditionalist Catholic media refer to the protesters as gray-haired refugees from a long-gone post-Vatican II era, boomers who have lost their way amid the liberal notions that permeate Portland life.

St. Francis has become a Rorschach test for traditionalists on social media, projecting what they don't like about many modern American parishes. A writer for Crisis Magazine seethed that the involvement of women protesters was an attack on spiritual masculinity.

They are willing to concede to the gray hair, but parishioners like Steve Stevens beg to differ.

"We are churchless," he told NCR, speaking amid the din of the after lunch crowd at the St. Francis Kitchen, a parish ministry that regularly feeds the homeless, often amidst a mixed reaction from the city's political leaders and developers who see the surrounding neighborhood as another crown jewel to pick off in this town's enveloping gentrification.

Stevens and a few dozen others from St. Francis now meet regularly in an informal community, celebrating the Mass rites on their own, a lay-run service without a priest present. Others have moved on to neighboring Catholic parishes or have severed ties with organized faith entirely.

Those opposed to changes in the parish instituted by Kuforiji — they say at the insistence of the archdiocese, under the direction of Portland Archbishop Alexander Sample — note that the small parish community, which used to attract about 100 each Sunday, has now dwindled to a few dozen. Some of those who now attend are attracted to the parish by Kuforiji's new social media-inspired fame.

Much of the dispute centers on liturgy. After Kuforiji arrived, he instituted a series of changes in the parish Sunday Mass. Out went inclusive language. He discouraged the recitation of a prayer inserted into the Mass, describing the parish as a community that believes that "Jesus reveals a God of love and compassion" and pledging parishioners to "solidarity with the poor and the oppressed."

In the dumpster went a sign that used to adorn the church, welcoming migrants and refugees, as well as a colorful altar cloth and vestments offered as a gift by the parish's Guatemalan sister community. (Church rubrics, said Kuforiji, sanction only white.) 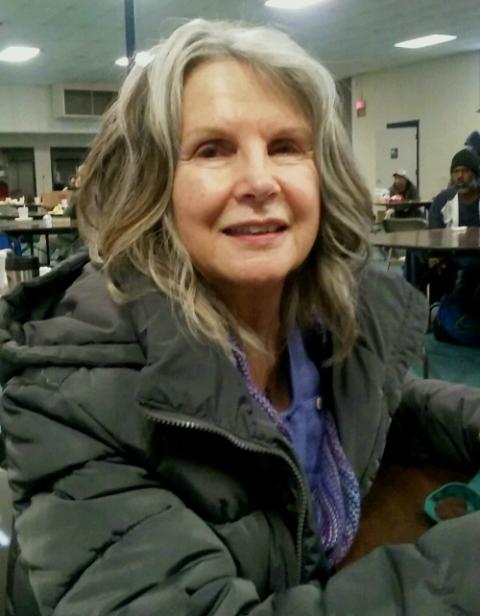 The annual summer parish Mass in a local park was canceled because of fear that the host could be contaminated by possibly falling on the grass. Gold chalices replaced earthen vessels. Lay input from the parish liturgy committee, a longtime fixture at the parish, which included hymns and prayers created by parishioners, was terminated. Out went hand clapping and joined hands at the Lord's Prayer.

Much of what Catholic author Paul Wilkes described as making St. Francis one of the best Catholic parishes in the country was taken away.

"How can we use silver and gold up there and see people hungry in this place?" Jan Rose, another longtime parishioner, told NCR while sitting at a table at the St. Francis Kitchen.

Individually, the changes appear to be little, say former parishioners. But seen in one package, they say, the parish has been taken over by an autocratic leadership that refuses to take their concerns seriously.

Their frustration culminated in a June 30 demonstration at Sunday Mass by parishioners, reported in The Oregonian newspaper, featuring protesting parishioners in T-shirts that proclaimed "Jesus Resists" and "Question Authority." A video of the event was widely distributed on Catholic traditionalist media outlets.

Longtime parishioner Melanie Pittman participated in meetings with Kuforiji intended to defuse the situation. Instead, it became even more embroiled.

According to Pittman, the priest told the group not to expect inclusive language to be used in liturgy at St. Francis. And, he said, in a parish formerly administered by Valerie Chapman, a laywoman referred to as the longtime de facto pastor by parishioners, women could expect to have no place at the altar at St. Francis.

Chapman retired in 2017 after a long career in parish ministry.

She described her role at St. Francis as pastoral leader, working with priests who would offer Mass on Sundays, with much of her time devoted to the St. Francis Kitchen ministry.

The parish liturgy, she said, was developed by "very creative people who were inspired by Vatican II and the call for the laity to be involved. It was very moving and wonderful for a long time." Parishioners would come to St. Francis from well beyond the parish boundaries.

She understands the distress caused by change but Chapman, for one, said that she was uneasy about the demonstration at the parish Mass. 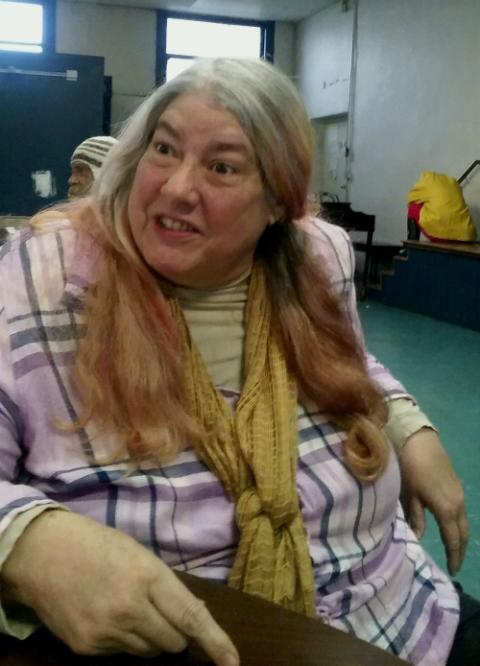 "This is the Eucharist of the dining hall," Melanie Pittman says about the St. Francis Kitchen, where she regularly works. "This is where we meet God." (Peter Feuerherd)

While liturgical issues took center stage, parishioners say that the ministry at St. Francis Kitchen is now threatened, as the archdiocese seeks a takeover via Catholic Charities. The St. Francis Kitchen began in 1979 as a Catholic Worker hospitality house, welcoming all, eschewing efforts to reform its patrons or impose religious views upon them, and it became a ministry of the parish in the 1990s.

For Pittman, the aura of the real estate boom that now envelops this city hangs over the future of St. Francis Kitchen. She said the city is anxious to rid the neighborhood of the homeless, many of whom congregate much of the day at the Kitchen, which, besides meals, offers such amenities as a piano, chess and computer access. Pittman said that rumors abound that the increasingly valuable real estate around the parish would be helpful to pay off sex abuse settlements for the archdiocese.

"We have some of the most difficult people we are trying to welcome," she said, noting the presence of the homeless in the neighborhood, many afflicted by substance abuse and mental health issues. When the weather gets cold, the Kitchen occasionally doubles as a shelter. Parishioners who have left the parish still support the St. Francis Kitchen with their dollars and their time, keeping alive that link to the church.

"This is the Eucharist of the dining hall," said Pittman about the St. Francis Kitchen, where she regularly works. "This is where we meet God."

In Portland, part of a region known for being one of the most unchurched in the country, St. Francis served for a long time as a haven for Catholics who were disenchanted with much of the church. Chapman noted that the parish lost about a third of its congregation as a result of the sex abuse scandals. Now it has withered further.

"It's a complicated place. Portland is not the most churched community," she said. The changes brought by Kuforiji made that tenuous link even more severed.

"A lot of people have moved on to other places. Sometimes maybe that's what we are called to do," said Chapman.

Kuforiji declined an interview, referring all questions to the archdiocese.

David Renshaw, spokesman for the archdiocese, said the parish is now focused on reaching younger people moving into the neighborhood, "making the parish more accessible and welcoming."

St. Josaphat's life, in earthly terms, did not end well. His head was chopped off, the result of a liturgical war. But the framework he promoted, an acceptance of liturgical diversity combined with fidelity to Rome, lives on among Byzantine rite Catholics.

By contrast, at St. Francis, that kind of unity remains ever more elusive.

A version of this story appeared in the Dec 27, 2019-Jan 9, 2020 print issue under the headline: Unity eludes St. Francis of Assisi Parish.