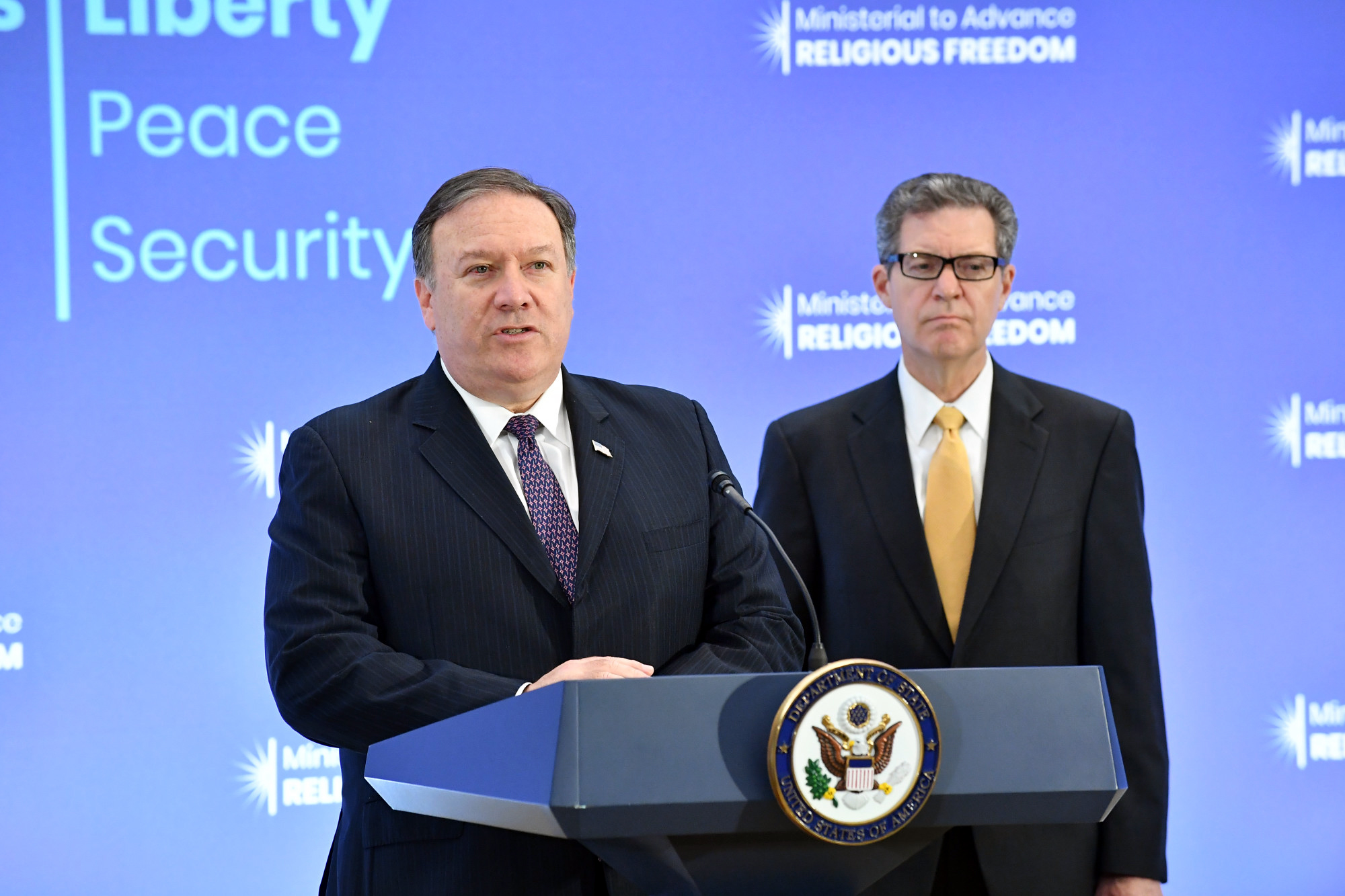 Secretary of State Mike Pompeo delivers closing remarks with Ambassador Brownback at the Ministerial to Advance Religious Freedom on July 26, 2018 at the U.S. Department of State, in Washington. (RNS/ State Department)

The State Department concluded its first-ever Ministerial to Advance Religious Freedom July 26, with declarations promising further efforts to reduce religious persecution, even as critics said they are waiting to see its statements turned into actions.

Closing the meeting of some 350 government officials, religious freedom advocates and others from more than 80 nations, Secretary of State Mike Pompeo pointed to an action plan, dubbed the Potomac Declaration, that lays out "concrete ways" to protect religious groups around the world.

"The Potomac Declaration is a formal affirmation that says right up front that the United States takes religious freedom seriously, that we will work with others around the world to help those under attack for their beliefs, and that we expect leaders around the world to make it their priority as well," Pompeo said in a news conference.

The plan of action accompanying the declaration calls for the repeal of "inherently subjective" anti-blasphemy laws abroad and the protection of the publication of religious materials. Ambassador-at-Large for International Religious Freedom Sam Brownback called the meeting's work a demonstration of "a moment where the Iron Curtain prohibiting religious freedom is coming down."

In addition, 25 countries co-signed a statement condemning abuses of religious freedom by terrorist groups, while fewer than a dozen added their names to statements condemning religious restrictions in China, Iran and Myanmar.

But Trump administration supporters focused on the Potomac documents, speaking of them in glowing terms. Johnnie Moore, a member of the U.S. Commission on International Religious Freedom as well as an ad hoc group of evangelical advisers to President Trump, said the ministerial delivered "religious freedom's Magna Carta."

The meeting was welcomed by groups not aligned with the Trump White House as well as some experts who have disagreed with the administration.

Jehovah's Witnesses, who did not attend the ministerial, expressed hope that the summit could help religious minorities like them who have faced restrictions. More than two dozen Jehovah's Witnesses have been detained in Russia and dozens more are imprisoned in Korea as conscientious objectors.

"We're certainly hopeful that the things that are happening to Jehovah's Witnesses — or anybody else whose freedoms are being restricted — that it gets noticed and that it could improve for everyone," said Jarrod Lopes, a communications representative for the Witnesses.

Imam Mohamed Magid, the leader of All Dulles Area Muslim Society in Virginia who was at the ministerial, said he appreciated in particular Brownback's push for a global alliance of leaders to address religious freedom, adding that he hopes there will be regional alliances on the continents of Africa and Asia.

"We have to have people around the world who are activists," said Magid, who noted the ministerial was the largest gathering of religious people from other countries that he can recall attending in the United States.

Peter Henne, who teaches political science at the University of Vermont and has questioned the Trump administration's treatment of Muslims, said the summit seemed to produce substantive discussions.

"This was not the Magna Carta for religious freedom, but it wasn't just a sham for evangelicals," said Henne, who followed the summit on Twitter.

But Henne appeared skeptical that the discussions would bear fruit: "The Trump administration has promised a lot since the election about helping persecuted Christians, helping people around the world generally, and it hasn't done a whole lot yet."

Other critics of the White House sharply contrasted Trump policies with the summit's talk of religious freedom.

"This administration is led by Islamophobes, runs internment camps for children separated from parents seeking asylum from persecution, and has failed to deliver promised reconstruction funds for Iraqi Christians and other minorities," said Shaun Casey, who launched the State Department's Office of Religion and Global Affairs under former Secretary of State John Kerry.

"The conference produced a cloud of words that in no way changed facts on the ground regarding either the Trump Administration's dreadful record on religious freedom or the behavior of other nations."

Suhag Shukla, executive director of the Hindu American Foundation, said the meeting showed the State Department was putting religious freedom on par with other interests, such as security and trade.

"What received scant mention, however, is a fundamental principle that's been a key to America's success in this realm – that is the healthy distance between religion and state," she said. "It's our abiding hope that as our country seeks to promote religious freedom abroad, we not forget the principles which have made religious liberty possible at home."

Brownback seemed ready to counter that criticism, saying at the news conference that protecting religious freedom is a "safe space" for government that can also lead to greater economic growth and less terrorism.

"You have a right to religious freedom, to do as you choose with your own soul, period," he said. "That's what we are pushing, and we think that's fully consistent with separation of church and state. The government's role in this is to protect the right."