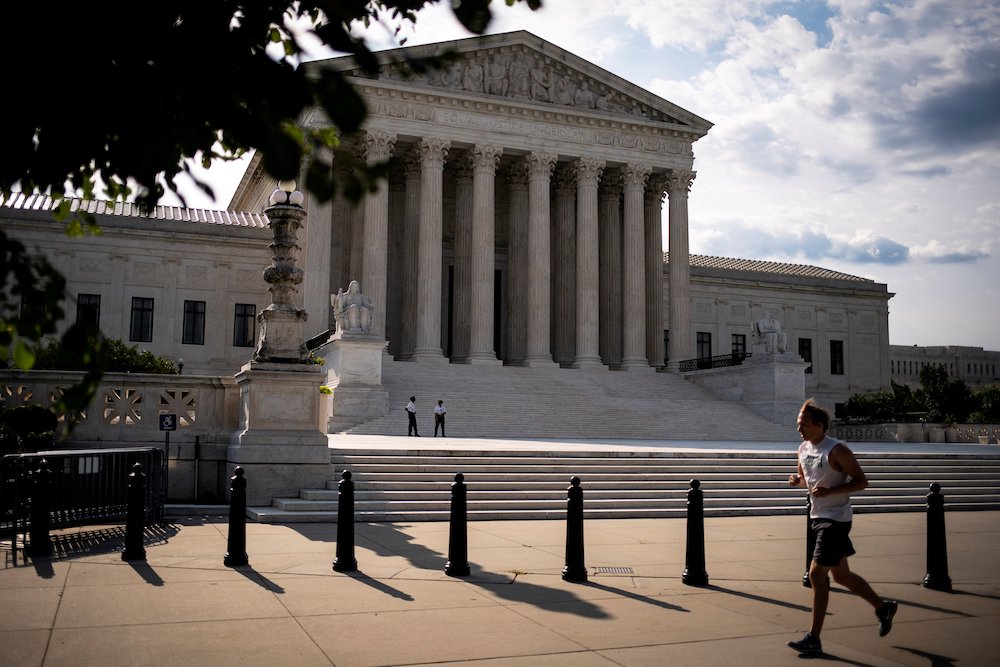 The Supreme Court, which begins its new term Oct. 5, will be hearing oral arguments by teleconference, just as it did at the end of the last term, due to the coronavirus pandemic.

The court announced its plan Sept. 16, saying in a news release it would follow the same format that it did in May and that "in keeping with public health guidance in response to COVID-19, the justices and counsel will all participate remotely."

The court's building will remain open for official business only and is closed to the public until further notice.

The justices are scheduled to hear 10 cases in October. No decision has been announced about how the November and December oral arguments will take place.

A report on SCOTUSblog, which covers the Supreme Court, said the teleconference format, where the justices took turns asking questions in order of seniority, drew mixed reviews from court watchers: Some criticized it, others said the format allowed for increased participation from justices who normally don't ask questions such as Justice Clarence Thomas.

Just before the court's announcement, a group of 50 media organizations and the Reporters Committee for Freedom of the Press sent a letter to Chief Justice John Roberts urging the court to provide live audio access during its new term. After the announcement that the October cases would be heard by teleconference, the group tweeted this decision "is a great step toward greater access transparency" and also urged the court to "provide live audio for the entirety of the term."

On Nov. 4, the court will hear oral arguments about a Catholic social service agency that was excluded from Philadelphia's foster care program for not accepting same-sex couples as foster parents because the agency upholds church teaching on traditional marriage.

The U.S. Conference of Catholic Bishops, the Pennsylvania Catholic Conference and a few Catholic Charities agencies joined more than 30 other religious groups, states and a group of Congress members urging the Supreme Court to protect faith-based foster care services in Fulton v. Philadelphia.

They argued in amicus briefs that the court should allow the city's Catholic social service agency to continue its foster care role and protect faith-based ministries nationwide by ensuring their First Amendment religious exercise rights.

On Nov. 10, the court will hear arguments challenging the constitutionality of the Affordable Care Act, known as Obamacare. This will be the third time this court has looked at this legislation.

The case, Texas v. California, stems from Republican attorneys general who claim the legislation's individual mandate provision was made unconstitutional when its penalty was set to $0 under President Donald Trump's 2017 tax overhaul.

The Trump administration, supporting the attorneys general, has asked the court to overturn the current health care law. If this happens, millions of Americans could lose their health insurance if a replacement plan is not in place.