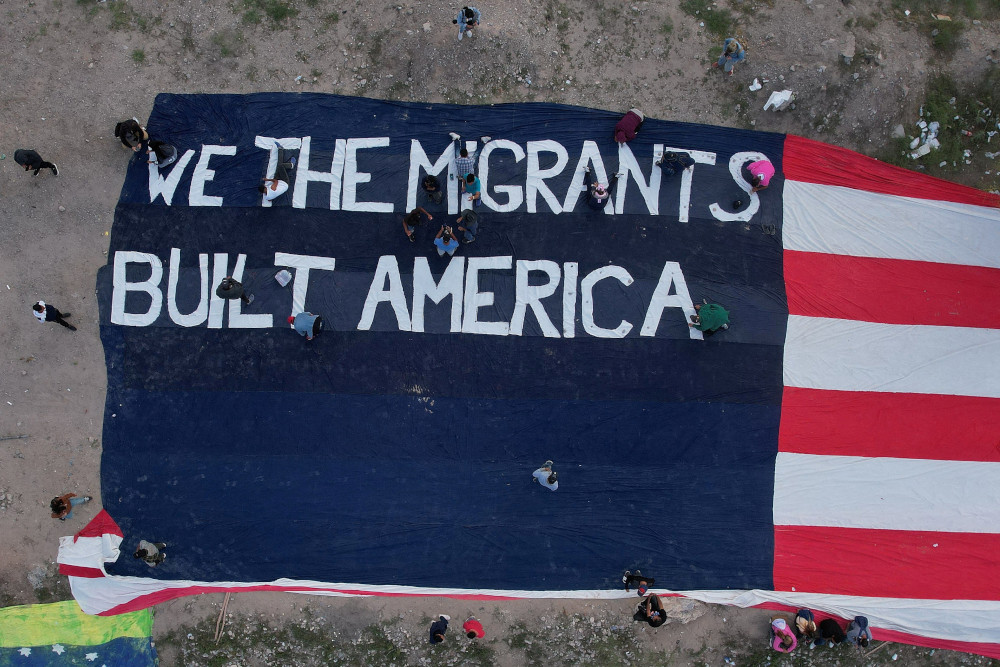 Migrants at a camp near the banks of the Rio Bravo in Ciudad Juárez, Mexico, make a large banner in the likeness of the U.S. flag Oct. 30, 2022. (CNS photo/Jose Luis Gonzalez, Reuters)

Supreme Court justices Nov. 29 examined a Biden administration policy that placed the arrest and deportation of some unauthorized immigrants over others.

In oral arguments that lasted more than two hours, the court seemed divided over the challenge to the administration's policy that put a priority on deporting immigrants who pose a threat to national security, public safety or border security.

The policy has been challenged by Texas and Louisiana officials who claim federal law does not provide the options for enforcing which immigrants can be singled out for deportation.

The case focused on a 2021 memo from Homeland Security Secretary Alejandro Mayorkas outlining priorities for the arrest, detention and deportation of immigrants.

In June, a Texas-based federal judge blocked this policy. The following month the  Supreme Court in a 5-4 vote rejected the Biden administration's request to restore the policy, but agreed to hear oral arguments about it.

Several justices Nov. 29 seemed ready to side with the two states arguing their legal right to challenge the administration's policy.

A few of the justices repeatedly emphasized that federal immigration law says that some immigrants "shall" be taken into custody or deported, indicating that the administration didn't have option to pick and choose who they would focus on.

"Shall means shall," Chief Justice John Roberts said. "Shouldn't we just say what the law is?" he asked, but he also acknowledged the administration's argument that Congress had not allocated necessary funds for the government to try to remove every noncitizen.

The 2021 memo from Mayorkas said there are approximately 11 million immigrants in the country without documentation, and the government does not have the ability to apprehend and remove all of them, which is why the Biden administration issued priorities as to who should be targeted for deportation.

Solicitor General Elizabeth Prelogar, arguing for the administration, said DHS could not possibly apprehend and seek the removal of all the immigrants living in the country illegally.

She also said the two states should not have been able to challenge the policy since they have not suffered direct harm because of it.

Kate Melloy Goettel, director of litigation for the American Immigration Council, said in a statement that this case gave the Supreme Court the "best opportunity in years to affirm the federal government's well-established authority to set its own enforcement priorities and choose who it targets for deportation -- and who it doesn't."

She also noted that the country's immigration system "works better when federal officials decide when to prioritize immigration enforcement."

"States like Texas have repeatedly sought to make our immigration system harsher and more inhumane by overturning federal immigration authority in a manner inconsistent with our immigration laws and years of court precedent," she added.

She urged the court to "reject Texas' ill-conceived argument that immigration laws impose affirmative obligations on ICE (Immigration and Customs Enforcement) to carry out arrests against their considered judgment."

A decision in United States v. Texas is expected next June.