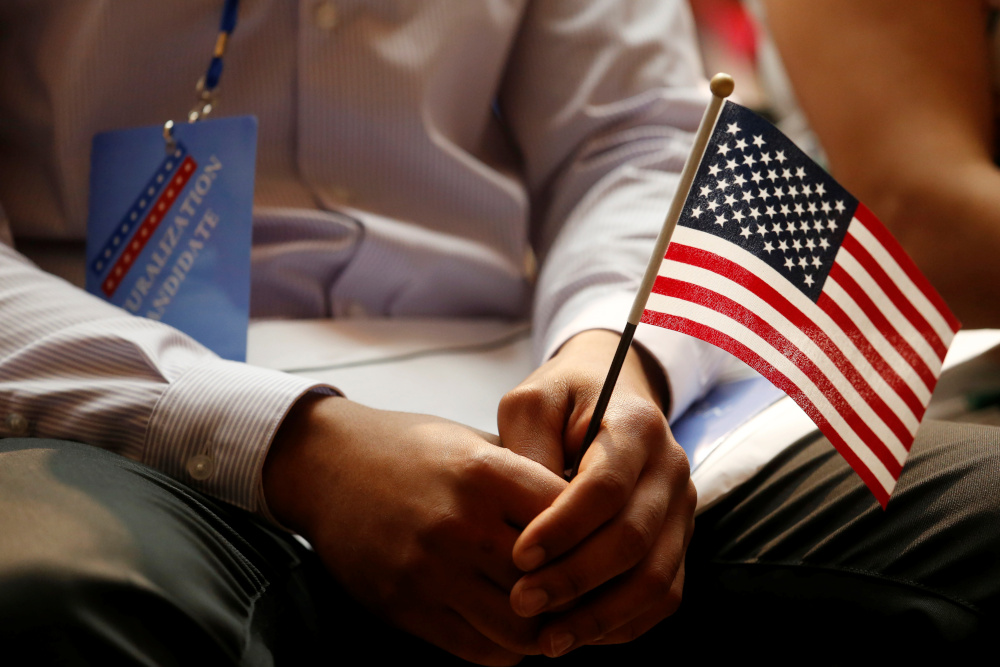 A new citizen holds a flag at the U.S. Citizenship and Immigration Services naturalization ceremony in the Manhattan borough of New York City July 3, 2018. The Supreme Court agreed Feb. 15, 2019, to hear oral arguments in April about the Trump administration's push to add a citizenship question to the 2020 census. (CNS/Reuters/Shannon Stapleton)

The U.S. Supreme Court agreed to hear oral arguments in April about the Trump administration's push to add a citizenship question to the 2020 census and its decision will come just in the nick of time, since the Census Bureau needs to begin printing forms for the every-10 years-questionnaire this summer.

The court agreed Feb. 15 to take on this case – Department of Commerce v. New York – without following the normal procedure and waiting for action from the federal appeals court.

In January, a federal trial judge blocked the Commerce Department from adding the citizenship question to the census saying the process that led to adding it was deeply flawed.

U.S. Commerce Secretary Wilbur Ross has maintained the citizenship question is in response to a request from the Justice Department, which said the information would help it enforce the Voting Rights Act.

U.S. District Court Judge Jesse Furman in New York did not buy this reasoning and criticized Ross for ignoring reports of both government statisticians and demographers who had warned that adding this type of question was a mistake.

Solicitor General Noel Francisco urged the Supreme Court to review Furman's decision, saying the judge had exceeded his authority. He also said citizenship questions have been asked of sample groups of the population in previous census forms and that they are also used by other countries.

The lawsuit initially challenging the citizenship question was filed by New York and other states and localities and advocacy groups that called the question an attempt to discriminate against immigrants.

"Adding a question about citizenship to the census would incite widespread fear in immigrant communities and greatly impair the accuracy of population counts," said Letitia James, New York's attorney general, in a Feb. 15 statement.

Civil rights groups and religious organizations have opposed the addition of a citizenship question that has not been used since 1950.

A Jan. 20 letter to Ross from the Leadership Conference on Civil and Human Rights called the citizenship question "unnecessarily intrusive" and said it could "jeopardize the accuracy of the entire count, leaving public, private, and nonprofit decision-makers with bad information for all purposes, for the next 10 years."

A few Catholic groups –Franciscan Action Network, the Catholic social justice lobby Network and the National Advocacy Center for the Sisters of the Good Shepherd – were among the 170 organizations that added their signatures to the letter, which emphasized that "mixed-status and immigrant households will be especially fearful of providing information to the federal government in 2020, given the heightened climate of fear that anti-immigrant rhetoric and policies have created."

This group joins other critics of the citizen question who have said it will undermine the form's accuracy because legal and unauthorized immigrants might refuse to fill it out. One government estimate notes that about 6.5 million people might decide not to participate in the census.

The census is rooted in the text of the Constitution, which requires an "actual enumeration" of the population every 10 years, with the House of Representatives to be apportioned based on "the whole number of persons in each state."