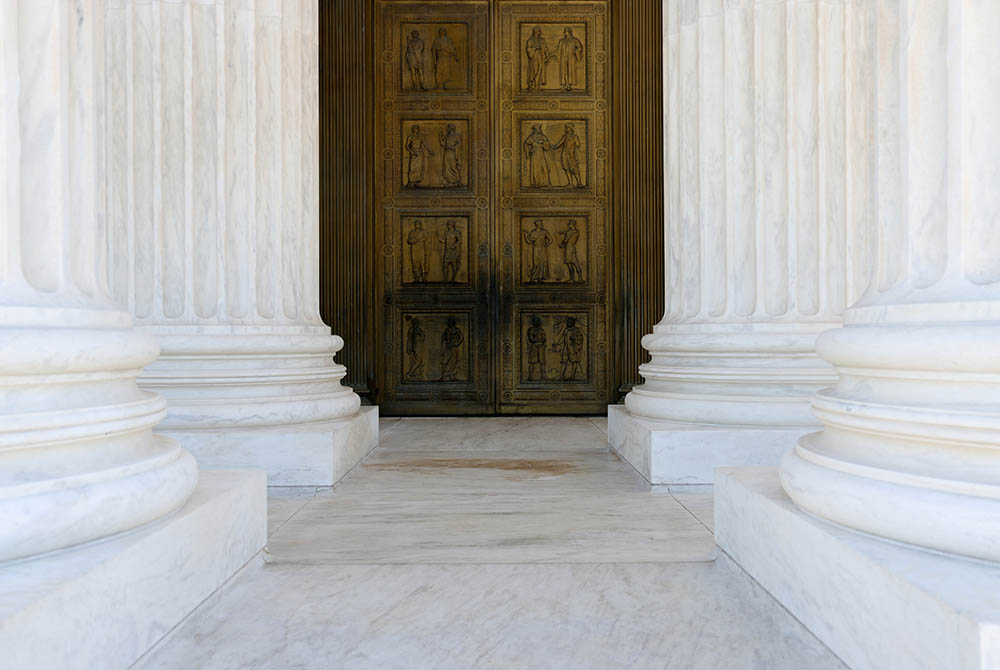 A general view of the main doors of the U.S. Supreme Court building in Washington is seen Nov. 4. (CNS/Jonathan Ernst, Reuters)

The Supreme Court, now with a full bench, seemed willing to find a compromise during Nov. 4 arguments about a Catholic social service agency shut out from Philadelphia's foster care program for not accepting same-sex couples as foster parents.

In the case, which pits the rights of religious groups against state discrimination laws, the justices looked for middle ground.

Justice Neil Gorsuch said he was concerned that the city of Philadelphia could "effectively take over a service that had been provided privately for some time and take it over so much so that it regulates it pervasively" preventing the free exercise of religion.

The case, Fulton v. Philadelphia, centers on Philadelphia's 2018 exclusion of the foster program of Catholic Social Services of the Philadelphia Archdiocese because of the agency's policy of not placing children with same-sex couples or unmarried couples because these unions go against church teaching on traditional marriage.

After the Nov. 4 arguments, the chairmen of three U.S. Conference of Catholic Bishops' committees pointed out that "Catholics have been called to care for children who have been orphaned, or whose parents face unique difficulties in providing care, since the earliest days of our faith."

They said in a statement they hoped the court would "reject a hollowed-out pluralism that permits people of faith only to preach but not to practice" their beliefs.

During the two hours of the oral arguments that took place by teleconference, a number of previous cases involving religious beliefs were mentioned.

In its petition in the Fulton case, Catholic Social Services urged the Supreme Court to overturn the Smith decision, which had been the basis of the lower courts' rulings against the agency.

Lori Windham, senior counsel at Becket, a religious liberty law firm, argued before the court on behalf of the foster care program. When she was asked by Justice Amy Coney Barrett if the Smith ruling should be applied in this case, Windham said: "Smith is a bad fit."

She stressed it is "possible for the government to accommodate religious groups" and that the city's action to shut out the faith-based group was "unnecessary" particularly when there are children in need of the service.

Hashim Mooppan, deputy assistant attorney general for the Department of Justice, similarly argued the city was preventing children from getting potential care. He said its action was "worse than cutting off its nose to spite its face. What it is doing is cutting off homes from the most vulnerable children in the city to spite the Catholic Church."

Attorneys arguing in defense of the city said the impact of siding with the faith-based group would have implications on other government services.

Justices Samuel Alito and Brett Kavanaugh mentioned more than once that same-sex couples had never been rejected by the Catholic agency because they had not ever approached the agency, and if they had, they would have been referred to another foster agency in the city.

"We need to find a balance that also respects religious beliefs," Kavanaugh said.

Justice Sonia Sotomayor similarly pointed to working out a path forward, asking one of the attorneys siding with the city: "If one wanted to find a compromise in this case, can you suggest one that wouldn't do real damage to all the various lines of laws that have been implicated here?"

In a news conference after the arguments, James Amato, executive vice president for Catholic Social Services, said the agency's work is more important than ever, particularly during the pandemic. He said its foster care ministry has "been on the sidelines" and the agency needs to know that it can "serve those in need without government restrictions."

The foster care program was supported in friend-of-the-court briefs by the U.S. bishops' conference, the Pennsylvania Catholic Conference and other Catholic Charities agencies.

The "same core beliefs about human dignity and the wisdom of God's design that motivate Catholics to serve the vulnerable," the statement said, "also shape our convictions about sex, marriage and the right of children to a mother and a father. These commitments are inseparable."