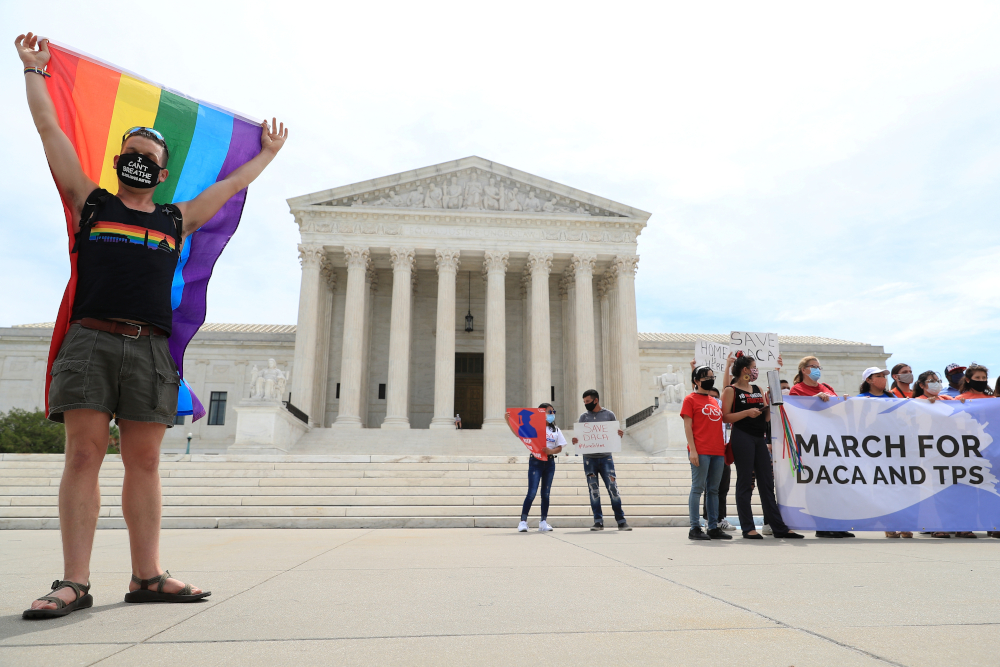 In the 5-4 majority opinion, Chief Justice John Roberts labeled the administration's attempts to end the Deferred Action for Childhood Arrivals (DACA) program, which protects immigrants who entered the United States as minors from deportation, as "arbitrary and capricious."

"We do not decide whether DACA or its rescission are sound policies," wrote Roberts. "… We address only whether the agency complied with the procedural requirement that it provide a reasoned explanation for its action."

"Here the agency failed to consider the conspicuous issues of whether to retain forbearance and what if anything to do about the hardship to DACA recipients. That dual failure raises doubts about whether the agency appreciated the scope of its discretion or exercised that discretion in a reasonable manner. The appropriate recourse is therefore to remand to DHS so that it may consider the problem anew," he continued.

As Roberts' decision emphasized, the court was not ruling on the legality of the DACA program but whether or not the Department of Homeland Security adhered to the proper protocols for ending the program. They ruled that it does not.

The court's four conservative justices dissented, with Justice Clarence Thomas writing that DACA was an illegal program from the outset.

The DACA program was enacted in 2012 by then President Barack Obama, which allowed qualifying individuals to apply for a permit to stay in the United States for employment or to continue their education. The program did not provide a path to citizenship for recipients.

In 2017, Attorney General Jeff Sessions announced that the program was being rescinded, labeling it an "unconstitutional exercise of authority by the executive branch."

In an initial wave of statements, Catholics from across the country voiced support for the court's decision on June 18.

"We feel the weight lifted from the shoulders of those young people who have been living in a sort of purgatory and we press Congress for a permanent resolution keeping Dreamers in the United States," said Lawrence Couch, director of the National Advocacy Center of the Sisters of the Good Shepherd, in a statement.

"Congress should take advantage of this decision and this unprecedented time to join together and demonstrate unity for all of America. Congress should pass new immigration reform welcoming more immigrants and asylum seekers and adding to the vibrancy of America," he continued.

"We accompany with joy our DACA brothers and sisters. One step at the time. Hope!," wrote Archbishop Gustavo Garcia-Siller of San Antonio.

"Thank God the Supreme Court recognized the human dignity of #DACA recipients and upheld the program that has allowed young AMERICANS born elsewhere to work and study in this country," wrote Bishop John Stowe of Lexington, Kentucky.

"We feel the weight lifted from the shoulders of those young people who have been living in a sort of purgatory and we press Congress for a permanent resolution keeping Dreamers in the United States."

The U.S. bishops have long opposed efforts to end DACA, calling the Trump administration's decision to end the program "reprehensible" in a statement in September 2017.

Following the Supreme Court's decision, the U.S. bishops issued a statement first assuring DACA recipients of their support, while also urging the president not to end the program.

"You are a vital part of our Church and our community of faith. We are with you," wrote Archbishop José Gomez, president of the U.S. bishops, and Washington Auxiliary Bishop Mario Dorsonville, chairman of the Committee on Migration.

"We urge the President to strongly reconsider terminating DACA," they continued. "Immigrant communities are really hurting now amidst COVID-19 and moving forward with this action needlessly places many families into further anxiety and chaos. In times of uncertainty, let us remember the teachings of the Gospel which encourage us to be open and receptive to those in need."

Ashley Feasley, director of policy for the U.S. bishops' Migration and Refugee Services office, told NCR, "the future of DACA is still undecided, but for today it survived a really substantive challenge. It still doesn't change the fact that we need congressional action."

"It's wonderful for DACA recipients, but the court clearly says the legality of the program is not the issue here," said Feasley, noting that the president has a considerable degree of power to end the program. "We still more than ever need a solution from Congress. This is not a time to let up pressure from the Senate, on Catholics in particular. The House has passed a bill already that has a path to citizenship. We really do have to work to find a permanent solution."