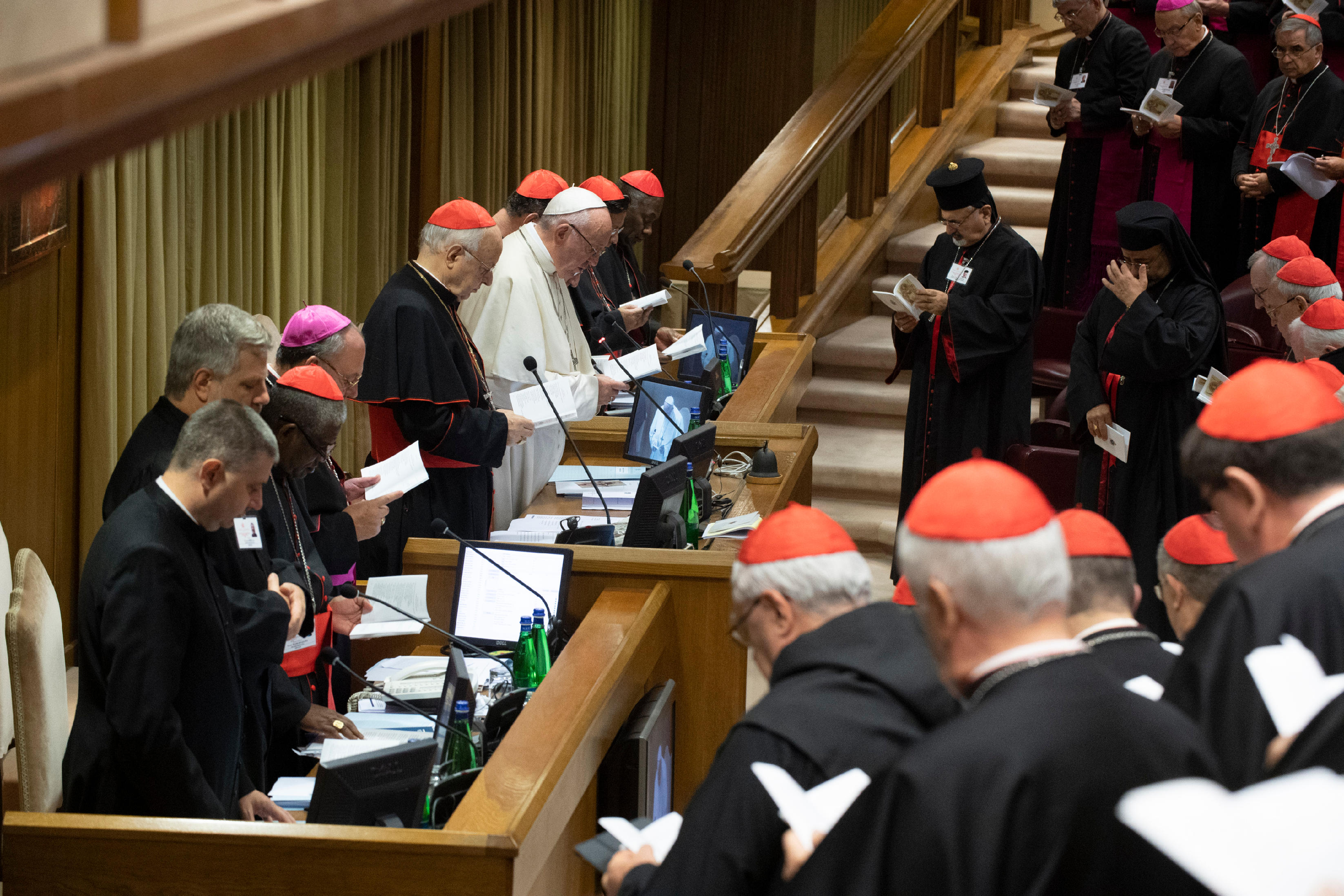 Pope Francis attends a session of the Synod of Bishops on young people, the faith and vocational discernment at the Vatican Oct. 4. (CNS/Vatican Media)

Australian Archbishop Anthony Fisher of Sydney used his speech at the Synod of Bishops to formally apologize to young people for all the ways the Catholic Church and its members have harmed them or let them down.

In the presence of Pope Francis, he apologized Oct. 4 "for the shameful deeds of some priests, religious and laypeople, perpetrated upon you or other young people just like you, and the terrible damage that has done."

Later, at the synod briefing for the press, Paolo Ruffini, prefect of the Dicastery for Communication, said several of the 25 bishops who spoke that morning asked young people to forgive the church and its members. Some spoke specifically of cases of clerical sexual abuse, he said, while others asked forgiveness for not welcoming migrants -- most of whom are young -- or for trying to "tame" young people rather than recognize their energy and enthusiasm as a gift.

Chiara Giaccardi, an Italian professor of sociology working with the synod, told reporters "at least five or six" of the 25 speeches "emphasized asking forgiveness in a strong way." Most of those, she said, mentioned "the church's lack of living its mandate fully."

The synod's communication plan is to have a few participants share each day their reflections on what was said in the hall. But the Vatican is not releasing a list of the bishops who speak during each session, is not publishing summaries of the talks and is not referring to anyone by name during the briefings.

Jesuit Father Antonio Spadaro, secretary of the synod's information commission, told reporters the gathering "is not a parliament, but a place of discernment" where everyone is free to speak openly, "knowing that what they say will remain inside the hall."

Still, Ruffini said, each bishop is free to talk to anyone about his own speech to the assembly.

Fisher's office shared the text of his speech.

In addition to apologizing for the church's failures with clerical sexual abuse, the archbishop also apologized for the ways in which the church had failed to "introduce you to the person of Jesus Christ, his saving word and his plan for your life."

"And for the times when you were searching for your sexual, ethnic or spiritual identity and needed a moral compass, but found church people unsympathetic or ambiguous: I apologize," he said.

The Catholic Church, Fisher said, often "sold you short" by not challenging young people to live up to their baptismal call to holiness, by offering them "unbeautiful or unwelcoming liturgies" and by not sharing with them church traditions such as the sacrament of reconciliation, pilgrimages and eucharistic adoration.

He apologized for "poor preaching, catechesis or spiritual direction" that failed to inspire conversion and for families, dioceses and religious orders that adopted a "contraceptive mentality" that did not even try to give birth to new vocations.