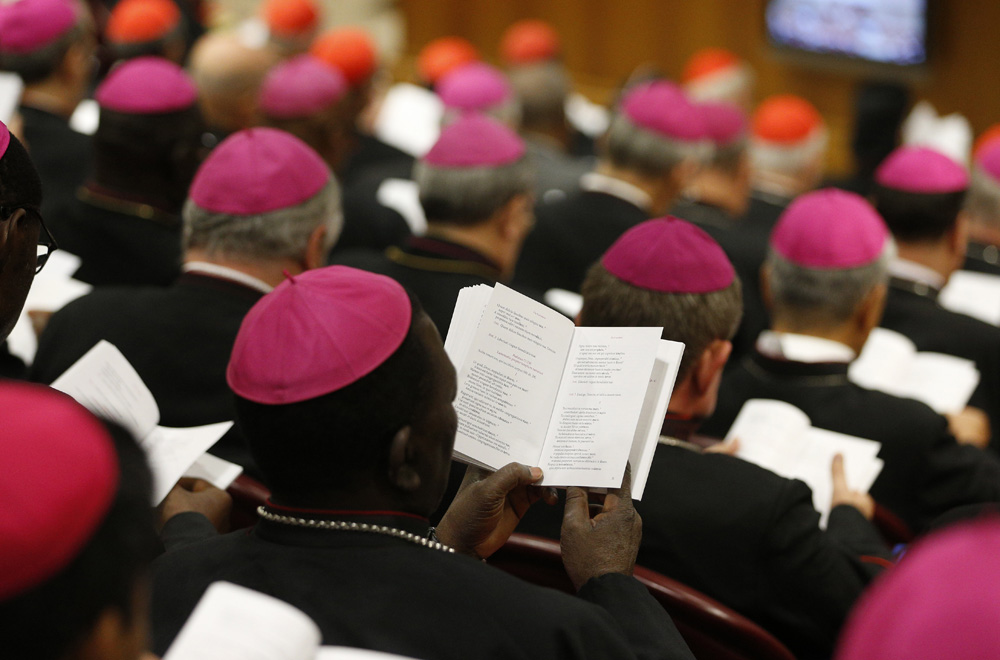 Bishops pray at the start of a session of the Synod of Bishops on young people, the faith and vocational discernment at the Vatican Oct. 9. (CNS/Paul Haring)

Two of the four working groups for English-speaking prelates at the worldwide meeting of Catholic bishops on young people have spent time considering the impact of clergy abuse scandals on the global church's credibility.

In the first of three reports expected from the working groups during the Oct. 3-28 Synod of Bishops, one of the English groups said bluntly that in the gathering's expected final document clergy abuse "cannot be skimmed over tangentially in a few short sentences."

Naming some of the effects of abuse — "shattered trust, the trauma and lifelong suffering of survivors; the catastrophic failures in case management; the continued silence and denial" — the group added: "these issues cry out to be named openly by the Synod."

"If priests themselves are afraid to minister among the youth, then how can our Synod get out the message that young people, their faith and their vocational discernment are important to us?" asked that group, which is being led by Indian Cardinal Oswald Gracias.

"As one member of our Group reminded us: 'Trust arrives slowly, on foot, but Trust leaves on horseback!' " the report said. " 'Trust must be rebuilt, one person at a time.' "

The 267 prelates and the 72 auditors taking part in the Synod of Bishops have been meeting in 14 groups divided by working language for the past few days to reflect on the first part of the gathering's three-part working document, known as the Instrumentum Laboris.

The Vatican released the groups' written reports Oct. 9, and has provided the names of the groups' leaders and secretaries. In a break from previous synods, the Vatican has not released a list of the full membership of the groups.

The secretary of Gracias' group is Irish Archbishop Eamon Martin. According to a list of the working groups' members obtained by NCR, others in that group include British Cardinal Vincent Nichols, Australian Archbishop Anthony Fisher, and Bishop Frank Caggiano of Bridgeport, Connecticut.

The second of the English groups to address the abuse crisis is led by Galveston-Houston Cardinal Daniel DiNardo. That group said the scandal "has undermined the work of the Church in practically every way, precisely because it has compromised our credibility."

"A Church that cannot be trusted is simply incapable of reaching out to young people in an effective way," it said.

Related: Scicluna: Accountability should be on agenda of February Vatican abuse summit

The group led by Chicago Cardinal Blase Cupich proposes that the synod craft a message to the young people of the world — "inspirational and missionary in character" — to be initially drafted by a group of two synod members and two of the young people attending the gathering as auditors.

That group also asks Pope Francis to consider writing an "interactive" apostolic exhortation after the synod, with questions directed at young people to facilitate sharing of ideas in small groups, and use of QR or quick response codes that would direct people to online chat rooms and videos with messages from the pontiff.

"Does leadership in the Church require bishops and priests to proclaim the Gospel truth by denying that these are families?" the group asked. "Or does our leadership require us to accompany the young people in the reality in which they find themselves?"

"St. John recounts that Jesus both accepted the woman caught in adultery and proposed something else," it stated. "Is it possible for us to both accept and even honor the family unit that a young person finds herself in and to share the Gospel ideal to her?"

Gracias' group suggested that the synod's final document include quotations from presentations made at the gathering by the younger auditors, saying the statements would "help to bring any final synod document to life."

That group also said the church communicates best with young people "by avoiding a moralistic or polemical approach — as if we had all the 'ready- made' answers."

DiNardo's group notes that it discussed whether the church should primarily listen to or teach young people.

"It was observed that many young people today … long for the clarity and confidence of the Church’s doctrine," the group said. "Others insisted that the stress on listening and relationality is indispensable in the measure that no doctrine, however beautiful and true, will be accepted unless it comes from a trustworthy source."

At the synod's daily press briefing Oct. 9, French Sr. Nathalie Becquart said she had been struck by the "humbleness" of the gathering.

"This is a very humble face of the church that recognizes its fragility," said Becquart, an auditor at the synod. "Reality is looked at for the way it is."

Using an image of the members of the church being on a boat with one another, she said: "The boat has sailed and we are trying to find the route together. There is something extremely authentic to this, and this gives me great hope."