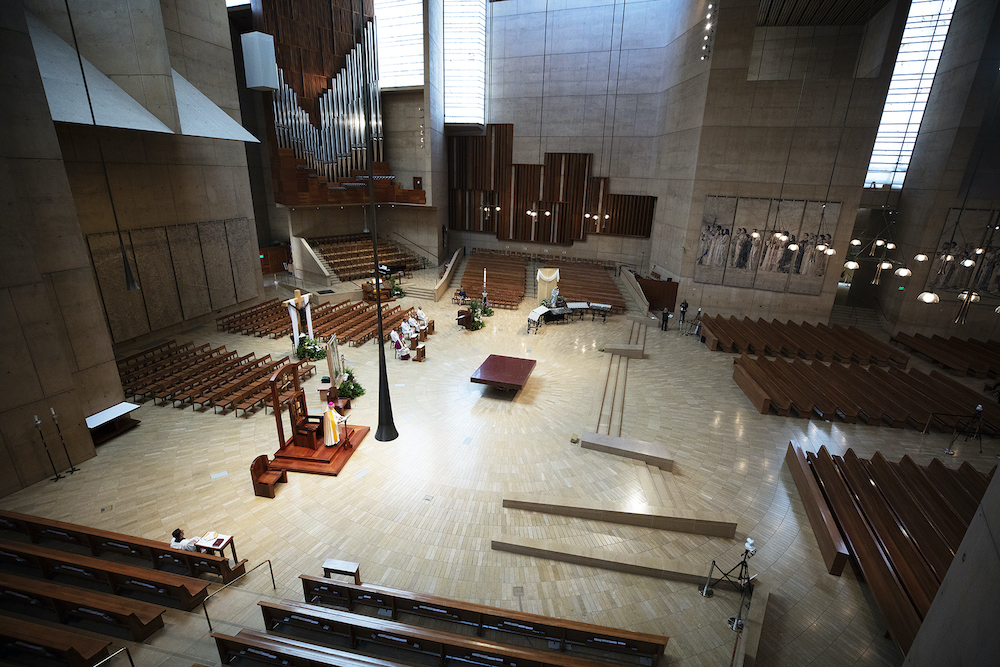 Archbishop Jose Gomez of Los Angeles leads a special liturgy in renewing the consecration of the U.S. to the care of our Blessed Mother May 1, from the nearly empty Cathedral of Our Lady of the Angels in Los Angeles. (CNS/Courtesy of Angelus News/Victor Aleman)

Several theologians are expressing concerns about a set of guidelines forwarded by the U.S. bishops' conference to Catholic prelates across the country over how to restart public celebration of the Mass despite the ongoing coronavirus pandemic.

Among the main worries: how a plan for Masses with fewer than 10 people might unfairly segregate peoples' access to the sacraments, whether such celebrations would downplay the liturgical role of the participating assembly, and if priests might burn themselves out in seeking to lead as many of the small celebrations as possible.

Also at question is why the bishops' Committee on Divine Worship decided not to create its own set of national recommendations, but instead to provide prelates with those independently prepared by the Thomistic Institute at the Dominican House of Studies in Washington.

As Felician Franciscan Sr. Judith Kubicki, a theologian at Fordham University, said: "It should be something coming out of the bishops' committee. Not something that they're borrowing from somebody else."

Anne McGowan, a theologian at Chicago's Catholic Theological Union, said the guidelines did a "pretty good job" balancing public health and sacramental concerns, but added: "I think it probably would be helpful … for the bishops to come up with some of their own maybe more standardized guidelines."

"It seems like these are being forwarded like, 'Here's some things to think about. Good luck,' " said McGowan.

The U.S. bishops' guidelines were first reported by NCR May 3, and were sent to prelates across the country April 30 by Hartford, Connecticut Archbishop Leonard Blair, the head of the bishops' committee.

They took their cue from the Trump administration's "Opening Up America Again" plan, which says the country will return to normalcy in three phases, allowing for gatherings first in groups of 10 people, then 50 and then on a more regular, unlimited basis.

Among the recommendations for the first phase: limiting access to the Mass via either a first-come, first-served system or on a rotational basis, asking congregants (but not presiders) to wear masks, and using hand sanitizer during distribution of Communion, which, they suggest, may still be received on the tongue.

Kubicki and McGowan expressed most apprehension about how parishes would be able to limit access to the newly reopened Masses to only 10 people at a time.

"I think there are real concerns about sacramental access here," said McGowan, saying any sort of first-come, first-served system "would seem to privilege somewhat those with the luxury of time."

The liturgist raised the particular question of essential workers who might only have a short window of time in which to go to Mass, and would not be able to come early to be first in line in order to gain access.

Kubicki, a former president of the North American Academy of Liturgy, was more forthright. "To me, this doesn't make any sense," she said.

"How do you tell a parish that only 10 people can come to a Mass?" she asked. "Practically and pastorally, it seems like a nightmare. This is not like a drug store or a supermarket, where you let in 10 people and 10 people leave, or something like that."

Timothy Brunk, a theologian at Villanova University, expressed similar concern. Imagining that a parish would have to somehow bar entry to the church building after 10 people had entered for Mass, he asked: "Do you station ushers … at the doors to say, 'Don't come in?' "

Brunk, the author of a new volume on the modern practice of the sacraments titled The Sacraments and Consumer Culture, also raised the issue of priests who might work themselves to exhaustion in order to lead as many 10-person Masses as necessary to serve all their parishioners.

Noting that in some regions with a lack of priests there have been high numbers of parish mergers or closures, he said: "If you have a single priest providing sacramental ministry for two, three or four parishes, scheduling more Masses has the potential for turning priests into sacrament machines." 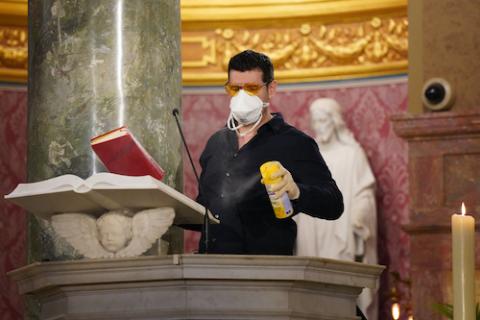 Sacristan Elias Taveras uses a disinfectant as he cleans the ambo between Masses April 26 at the Co-Cathedral of St. Joseph in Brooklyn, New York. (CNS/Gregory A. Shemitz)

McGowan spoke along the same lines, saying that even for priests who would seek to do as much as they can "there are limits to physical human stamina and what's possible."

Each of the three theologians also wondered about the guidelines' suggestion that Catholics could still receive Communion on the tongue "without unreasonable risk."

Kubicki proposed that in order for a priest to give Communion to those requesting to receive it on the tongue, he would need to sanitize his hands after each person. "What kind of liturgical practice is that?" she asked.

At least one bishop appears to agree with Kubicki. Knoxville, Tennessee, Bishop Richard Stika has requested on Twitter several times in recent days that people receive the Eucharist in the hand. In a May 8 post, he said they should do so to protect themselves, "the minister of Communion and the next person."

"Very Catholic and Christ-like," the prelate described it.

McGowan said that if she had drafted the Thomistic Institute's guidelines, she might have encouraged those wishing to receive on the tongue to place themselves among the last in the Communion line as a way of reducing the risk to others.

Brunk mentioned that a separate set of guidelines from the Federation of Diocesan Liturgical Commissions suggested that reception on the tongue be temporarily prohibited. He said he would like to know if the members of the bishops' committee had reviewed the federation's guidelines, and if they might also be officially distributed to the country's prelates.

A version of this story appeared in the May 29-June 11, 2020 print issue under the headline: Theologians concerned over bishops' plans for reopening Masses.