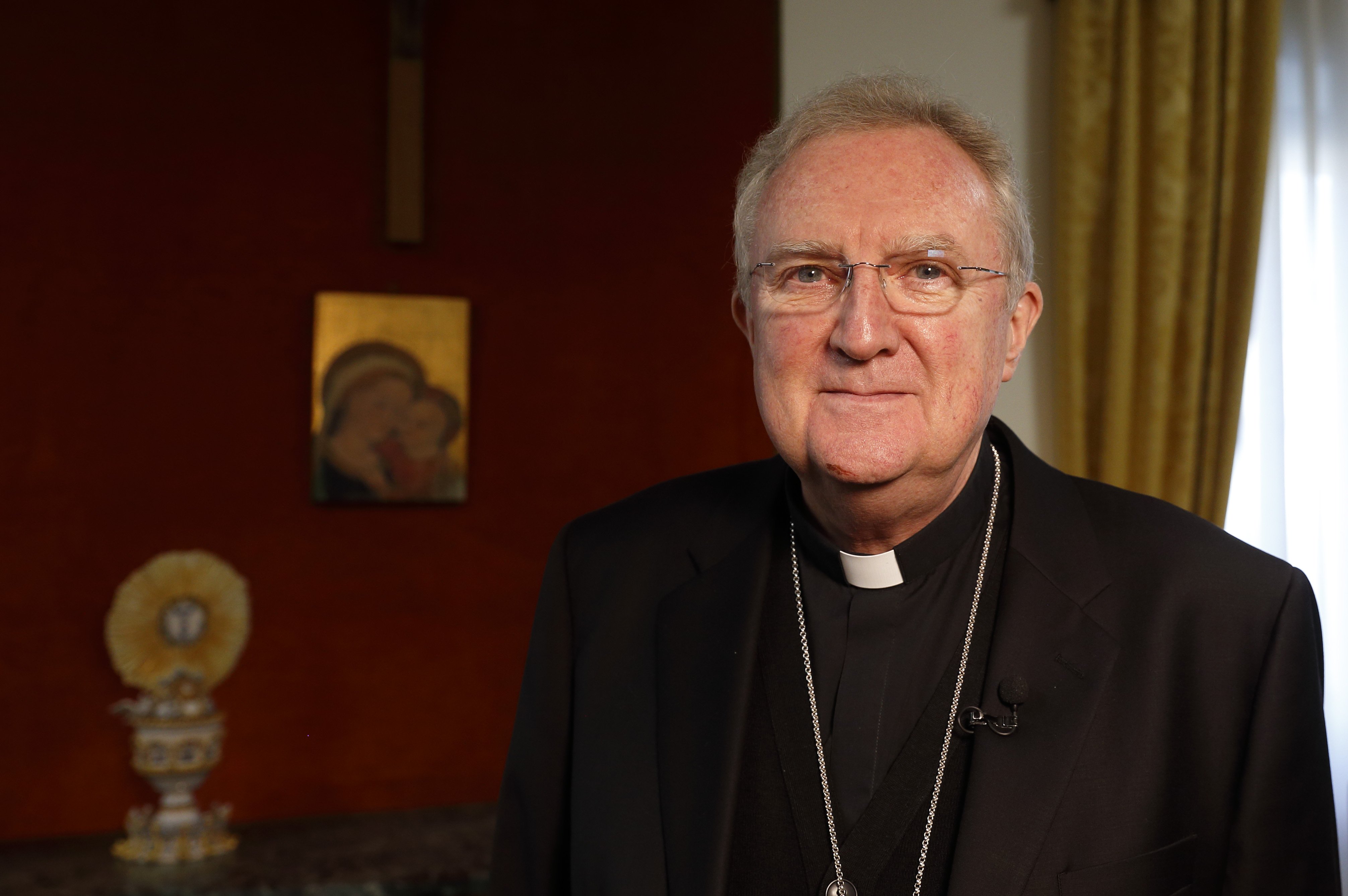 Archbishop Arthur Roche, prefect of the Congregation for Divine Worship and the Sacraments, is pictured during an interview with Catholic News Service at the congregation at the Vatican Jan. 21, 2022. (CNS photo/Paul Haring)

VATICAN CITY  — English Archbishop Arthur Roche is a key figure in what is offhandedly known as the Catholic Church's "liturgy wars."

Pope Francis named the 71-year-old archbishop prefect of the Congregation for Divine Worship and the Sacraments in May, and two months later the pope promulgated an apostolic letter "Traditionis Custodes" (Guardians of the Tradition), limiting celebrations of the Mass according to the rite used before the Second Vatican Council.

In December, Archbishop Roche released a document responding to some questions raised about "Traditionis Custodes," putting himself in the crosshairs of some of the more devoted, or belligerent, soldiers in those "liturgy wars."

While the church's prayer should not be a battlefield, Archbishop Roche told Catholic News Service it is understandable that people are passionate about it.

"The Eucharist is at the heart of what we are as Catholics; it is the thing to which we bring everything that's within us and from which we take everything in order to sustain us and to help us bear witness to Christ in the world in which we live," he said Jan. 21 during an interview in his office.

The Mass also reflects what the church is and believes, he said, so the rite used is not simply a matter of personal preference or sensibility.

"I think one of the problems that we are facing today is that we are living in a very individualistic world, a very relativistic world, and where the individual preference promotes itself above the common good and the common expression," he said. "I think that that is a very dangerous thing, and it is something that as Christians, we really need to take very careful note of."

The Acts of the Apostles (2:42) describes what it means for Christians to belong to the church: "They devoted themselves to the teaching of the apostles and to the communal life, to the breaking of the bread and to the prayers."

Archbishop Roche said those four elements involve recognizing the authority the bishops in communion with the pope have to govern the church, building up unity within the church, celebrating the Eucharist together and praying alongside one another.

The four elements go together, he said, and challenge "what is relativistic, what is individualistic within our communities today."

"This is not the pope's Mass, it's not my Mass, it's not your Mass. This is the Mass of the church," the archbishop said. "This is what the church has decided how we express ourselves as a community in worship, and how we imbibe from the books of the liturgy the doctrine of the church."

The differences between the pre-Vatican II and post-Vatican II Masses, he said, are not simply the use of Latin, chant, silence and the direction the priest faces.

The promotion of the pre-Vatican II liturgy as somehow more holy or prayerful than the current liturgy "is not basically a liturgical problem, it is an ecclesial problem," the archbishop said. The current Mass, with a richer selection of prayers and Scripture readings, reflects and reinforces the church's understanding of itself as the people of God.

"That which was given to us by the council, which classified, concretized the teaching of the church about itself and its understanding of the role of the baptized and the importance of the Eucharist and the sacramental life of the church, is not without significance for the future of the church," he said.

And the bishops gathered for the Second Vatican Council, under the inspiration of the Holy Spirit, said, "this is the direction in which we are going," Archbishop Roche said. "So 'Traditionis Custodes' is really a call to take the unity of the church, our being together for the celebration of the breaking of the bread and the prayer very, very seriously indeed."

Through regular contacts with bishops and bishops' conferences, he said, he knows most bishops have "greeted the pope's call back to the council and also to the unity of the church with open arms and are very much behind what the Holy Father is saying."

Obviously, people have preferences, the archbishop said. But Catholics need to look more deeply at what they are saying when they express those preferences.

"When people say, 'Well, I'm going to Father So-and-So's Mass,' well Father So-and-So is only the agent. It is Christ who is active in the Mass, it is the priest who acts in 'persona Christi' -- the person of Christ, the head of the church," he said.

"When we go to Mass, even when the music perhaps isn't something that we would personally choose — and again, this is individualism coming in — then we've got to realize that we are standing at the side of Christ on his cross, who gives everything back to the Father through this Eucharist," Archbishop Roche said.

The Mass makes present "everything that Christ did for our salvation; not simply for, you know, Jim's salvation or Mary's salvation, but for our salvation," he said. "We are the church. We are not individuals. We belong to a body that defines itself through the teachings of Christ which we have received in faithfulness, and which we should, in faithfulness, also carry out in order to create that unity and to create that harmony."