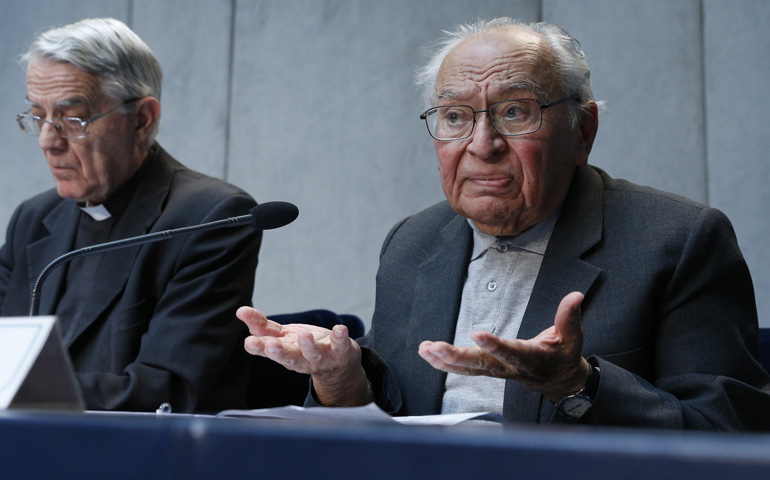 Dominican Fr. Gustavo Gutierrez speaks at a press conference Tuesday to introduce the work of the general assembly of Caritas Internationalis at the Vatican. At left is Jesuit Fr. Federico Lombardi, the Vatican spokesman. (CNS/Paul Haring)

Dominican Fr. Gustavo Gutierrez, the 86-year-old liberation theologian, said his work is "a love letter to God, to the church and to my people."

Asked if he would change anything he has written in the past 40 years, the Peruvian who is often referred to as "the father of liberation theology," said no one would write their beloved the same love letter after 40 years, "but it is the same love."

Gutierrez spoke to reporters Tuesday at the Vatican during a news conference to introduce the work of the general assembly of Caritas Internationalis, the confederation of 164 national Catholic charities.

Reflecting on the practical implications of Pope Francis' call for a "poor church for the poor," Gutierrez is to give one of the keynote addresses at the assembly.

The theme of the general assembly is "One Human Family, Caring for Creation," and will include discussions about the impact of climate change on the poor and on the religious obligation to care for all of creation in anticipation of Pope Francis' encyclical letter on the environment, said Honduran Cardinal Oscar Rodriguez Maradiaga, outgoing president of Caritas Internationalis.

The cardinal, who serves as coordinator of the pope's Council of Cardinals, said the nine cardinals were not directly involved in drafting the document, but the pope told them that the document was taking an ethical, not a scientific approach to the issue.

"Recently I was in the United States for several conferences and I already heard criticisms of the encyclical, even though it has not been published," the cardinal said.

The critics, he said, have an "ideology surrounding ecology and creation that is strongly tied to a vision of capitalism that does not want to stop damaging the environment because it does not want to lose earnings. Let's speak clearly."

Many people, the cardinal said, know of the Caritas network's emergency humanitarian assistance to populations suffering from the calamity of natural disasters. "This is just one of the tasks of Caritas, but it is not the principal one. The first task is to educate Christians" in communion and in a recognition that "the goods of this earth are meant not to be accumulated, but to be shared with one's neighbors through love and service."

The point of Caritas, he said, "is love, concrete love."

Gutierrez told reporters that "90 percent of liberation theology" is about the church's "preferential option for the poor," and the work of Caritas demonstrates that.

The importance of the key intuition of liberation theology -- its focus on concrete ways the Gospel responds to the poor -- "is clearer now because of the witness of Pope Francis," Gutierrez said.

At the same time, "theology is less important than living the faith" although it is necessary for reflection, he said.

"I have spent much time studying the Bible," Gutierrez said, and there is no passage that urges believers to sit and think about their faith and write theology texts. "Instead, it says, 'Go into the world and make disciples of all nations.' "