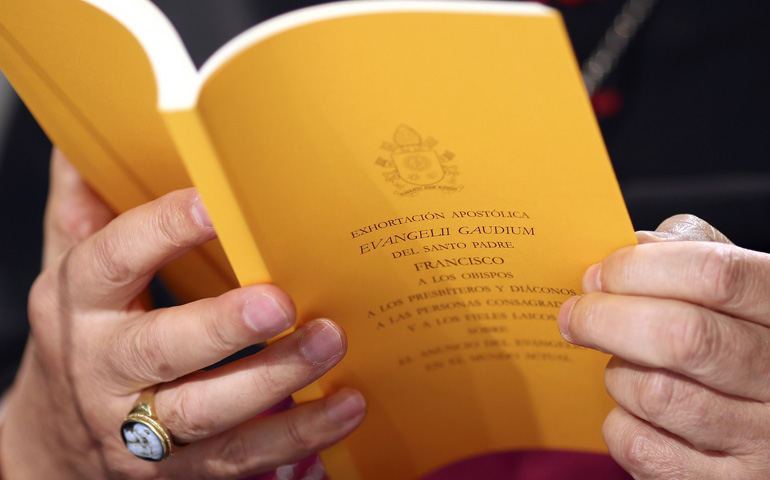 A copy of the apostolic exhortation "Evangelii Gaudium" ("The Joy of the Gospel") by Pope Francis at a news conference at the Vatican on Tuesday. (CNS/Reuters/Alessandro Bianchi)

Dreams can be powerful things, especially when articulated by leaders with the realistic capacity to translate them into action. That was the case 50 years ago with Martin Luther King Jr.'s famous "I Have a Dream" speech, and it also seems to be the ambition of Pope Francis' bold new apostolic exhortation, "The Joy of the Gospel."

In effect, the 224-page document, titled in Latin Evangelii Gaudium and released by the Vatican Tuesday, is a vision statement about the kind of community Francis wants Catholicism to be: more missionary, more merciful, and with the courage to change.

Francis opens with a dream.

"I dream of a 'missionary option,' " Francis writes, "that is, a missionary impulse capable of transforming everything, so that the church's customs, ways of doing things, times and schedules, language and structures can be suitably channeled for the evangelization of today's world, rather than for her self-preservation."

In particular, Francis calls for a church marked by a special passion for the poor and for peace.

The theme of change permeates the document. The pope says rather than being afraid of "going astray," what the church ought to fear instead is "remaining shut up within structures that give us a false sense of security, within rules that make us harsh judges" and "within habits that make us feel safe."

Though Francis released an encyclical letter titled Lumen Fidei in June, that text was based largely on a draft prepared by Benedict XVI. "The Joy of the Gospel," designed as a reflection on the October 2012 Synod of Bishops on new evangelization, thus represents the new pope's real debut as an author.

The text comes with Francis' now-familiar flashes of homespun language. Describing an upbeat tone as a defining Christian quality, for instance, he writes that "an evangelizer must never look like someone who has just come back from a funeral!"

At another point, Francis insists that "the church is not a tollhouse." Instead, he says, "it is the house of the Father, where there is a place for everyone." At another point, he quips that "the confessional must not be a torture chamber," but rather "an encounter with the Lord's mercy which spurs us to on to do our best."

Francis acknowledges that realizing his dream will require "a reform of the church," stipulating that "what I am trying to express here has a programmatic significance and important consequences."

Though he doesn't lay out a comprehensive blueprint for reform, he goes beyond mere hints to fairly blunt indications of direction:

On two specific matters, however, Francis rules out change: the ordination of women to the priesthood, though he calls for "a more incisive female presence" in decision-making roles, and abortion.

Francis says the church's defense of unborn life "cannot be expected to change" because it's "closely linked to the defense of each and every other human right."

The pope's toughest language comes in a section of the document arguing that solidarity with the poor and the promotion of peace are constituent elements of what it means to be a missionary church.

Francis denounces what he calls a "crude and naïve trust" in the free market, saying that left to its own devices, the market too often fosters a "throw-away culture" in which certain categories of people are seen as disposable. He rejects what he describes as an "invisible and almost virtual" economic "tyranny."

Specifically, Francis calls on the church to oppose spreading income inequality and unemployment, as well as to advocate for stronger environmental protection and against armed conflict.

In the end, "The Joy of the Gospel" amounts to a forceful call for a more missionary Catholicism in the broadest sense. The alternative, Francis warns, is not pleasant.

"We do not live better when we flee, hide, refuse to share, stop giving and lock ourselves up in our own comforts," he writes. "Such a life is nothing less than slow suicide."

Editor's note: Excerpts of Evangelii Gaudium will be posted to The Francis Chronicles over the next few days, and watch the NCR Today and Distinctly Catholic blogs for commentary on the apostolic exhortation.

A version of this story appeared in the Dec 6-19, 2013 print issue under the headline: New document amounts to Francis' 'I Have a Dream' speech.