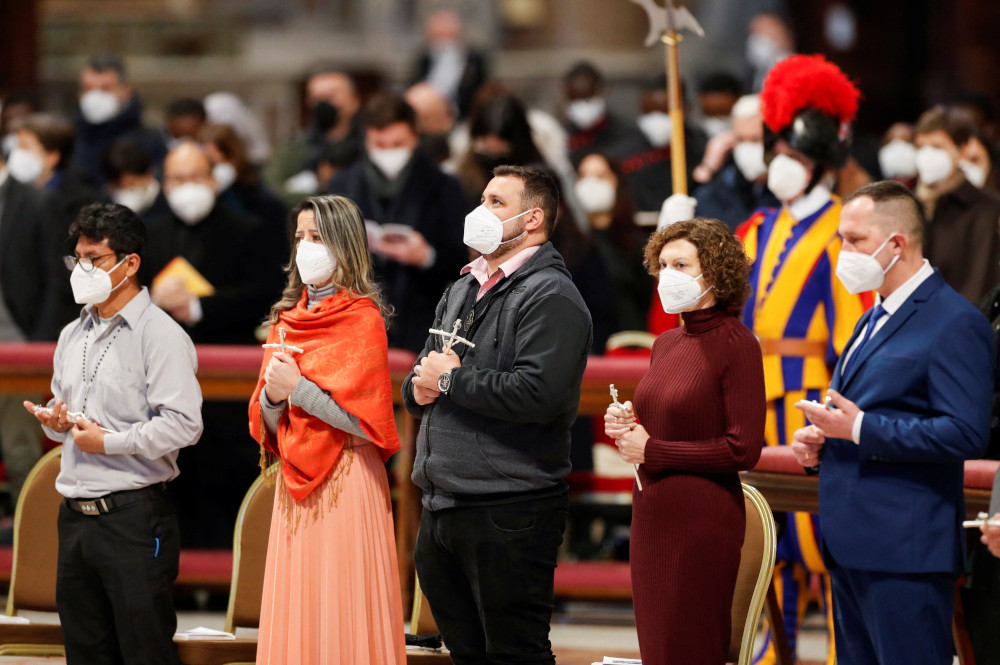 Catechists attend Pope Francis' celebration of Mass marking Sunday of the Word of God in St. Peter's Basilica at the Vatican Jan. 23, 2022. At the Mass, the pope formally installed women and men in the ministries of lector and catechist. (CNS photo/Remo Casilli, Reuters)

ROME — Pope Francis' Jan. 23 installation of lay men and women in the ministries of lector and catechist is a continuation of the unfinished work of the Second Vatican Council, said Catholic liturgists and theologians who heralded the move as both "historic" and "long overdue."

Liturgy scholar Rita Ferrone told NCR that at the time of Vatican II, there was much "creative work" being done to explore the shape and future of lay Catholic ministries, particularly surrounding that of lector and acolyte.

"Many of them never made it past the planning stages because of ambivalence and confusion among people who were responsible for carrying these ideas forward," she recalled.

At the Vatican's 2008 Synod on the Bible, a proposal to allow both men and women to be installed in the ministry of lector was passed by an overwhelming majority of bishops. However, Pope Benedict XVI never acted on the proposal, and consequently, many of the initiatives that emerged after the council "just never saw the light of day," according to Ferrone.

During Mass in St. Peter's Basilica on the Word of God Sunday, Pope Francis officially conferred these ministry roles to a diverse range of lay men and women from South Korea, Pakistan, Ghana and the Amazon region, among other locations.

The pope said that these men and women are responsible for "serving the Gospel of Jesus, of proclaiming him, so that his consolation, his joy and his liberation can reach everyone."

Their task — and that of all Christians, said Francis — is to "put the word of God at the center of the church’s life and pastoral activity."

Bishop Christopher Coyne of the Diocese of Burlington, Vermont echoed that sentiment, telling NCR that the pope's move is "furthering the notion" that lay men and women alike should be "assuming their baptismal role to be there as the Word of God in the world."

Francis is offering a "broader lens to help spread the gospel," said Coyne, a member of the U.S. bishops' worship committee.

The new change allowing for laymen and women to act as readers and altar servers in liturgical celebrations was announced by Francis in an unexpected alteration of church law last January.

The new law replaced the term "lay men" as the category of those who can formally serve in those ministries with "lay persons."

Ferrone said she hopes the Jan. 23 installation marked the beginning of a deeper understanding of what the ministries of lector, acolyte and catechist signify and why they are important in the life of the church.

"It's not just filling holes," she said. "We have this terrible way of treating certain liturgical ministries like widgets, without looking at this as an organic expression of the Spirit of God working through the laity to bring the church to greater faithfulness."

Historically, she observed, the ministry of lector was also tied to the instruction of new catechumens. Acolytes, who served at the altar, were also responsible for giving alms and helping with charity services outside of Mass.

Given this history, said Ferrone, "we need to be thinking about what these instituted ministries really are inviting us to and are there ways in which each of these ministries have a particular liturgical role, combined with a wider mission of the church?"

Jesuit Fr. John Baldovin, professor of historical and liturgical theology at Boston College’s School of Theology and Ministry, noted that previously such roles were "geared mainly to seminarians."

"Pope Francis' move may seem inconsequential in the practical sphere since lay women and men already perform service as readers and acolytes, but making them official says something very important about the nature of ministry in the Catholic Church today," Baldovin told NCR.

Ferrone agreed, noting that while in the United States women have served in such capacities for decades, it has only been on a temporary basis, rather than a permanent ministry.

"The difference between an instituted ministry and something that's done ad hoc is that the ad hoc thing, you can pull the plug on at any time," said Ferrone. "If it's instituted, it has a stability to it."

"That, for women, is a step of some significance to have instituted ministries, as opposed to just helping out," she added.

Andrea Grillo, a professor of sacramental theology at Rome's Pontifical Atheneum of Saint Anselm, told NCR that an image from St. Thomas Aquinas' writings came to mind, that of a building a ship.

Such a process, he said, requires someone to chop wood, someone to do the building and someone to pay for it.

As of the Jan. 23 papal Mass, "Women," said Grillo, "can even officially help design the ship."

A version of this story appeared in the Feb 4-17, 2022 print issue under the headline: Pope installs first women lectors and catechists.