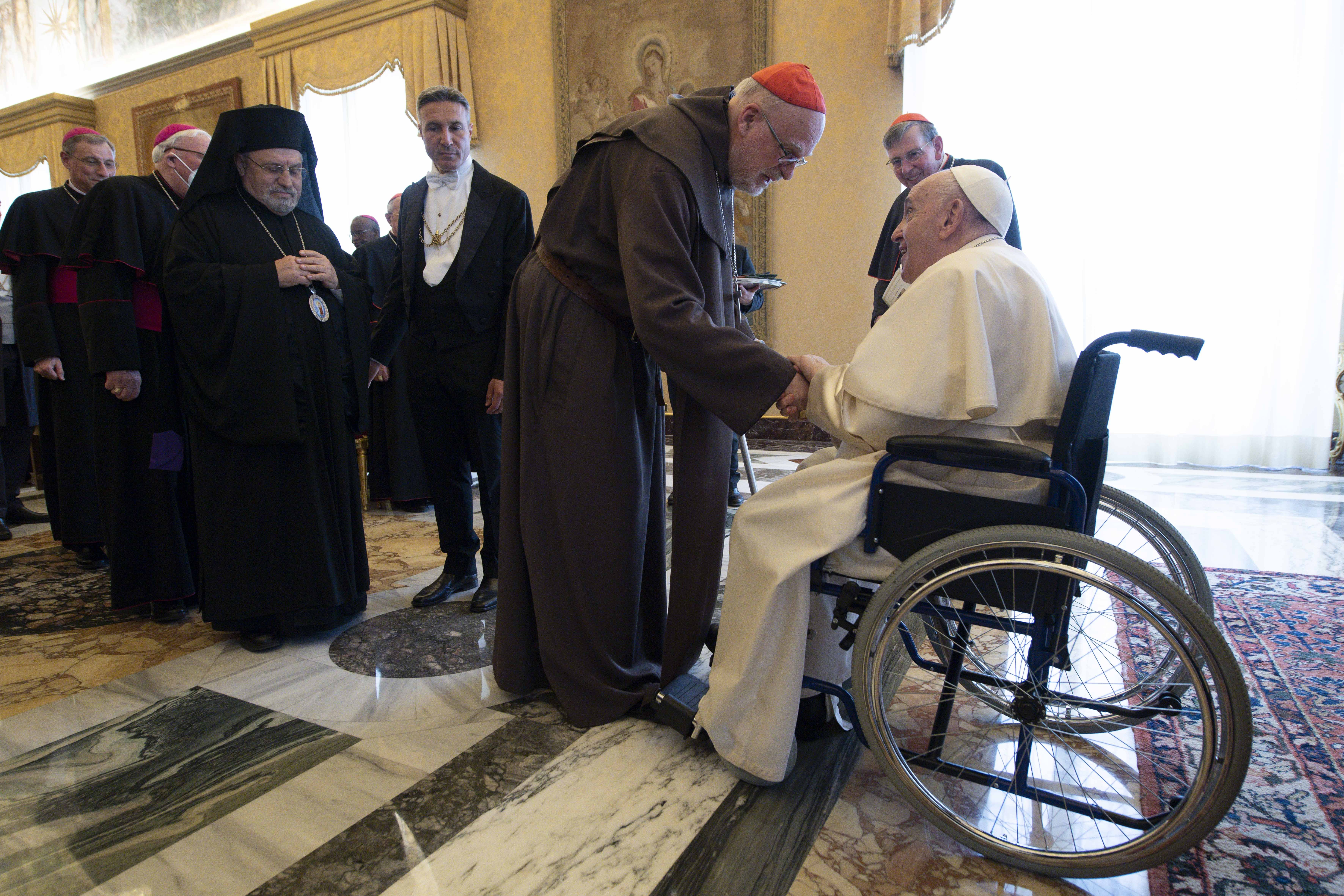 Pope Francis greets Cardinal Anders Arborelius of Stockholm, Sweden, during a meeting with members of the Pontifical Council for Promoting Christian Unity at the Vatican May 6, 2022. (CNS photo/Vatican Media)

VATICAN CITY — Doing nothing to overcome the divisions among Christians means allowing tensions to fester and even feed conflict, Pope Francis said.

"Ignoring the divisions among Christians, whether out of habit or out of resignation, means tolerating that pollution of hearts which makes fertile ground for conflict," he said May 6 during a meeting with members of the Pontifical Council for Promoting Christian Unity.

While the COVID-19 pandemic forced many ecumenical initiatives to be canceled or moved online, he said, it also had the benefit of creating a "renewed awareness" among Christians that they belong to one family, an awareness "rooted in the experience of sharing the same fragility and of being able to count only on God's help."

The pandemic proved the wisdom of 50 years of ecumenical work emphasizing that "for a Christian it is not possible, it is not viable, to go it alone within one's confession," he said. "Either we go together, fraternally, or we do not walk."

But, he said, even before the pandemic was truly over, "the entire world was faced with a tragic new challenge — the war currently underway in Ukraine," he said.

Pope Francis called Russia's war on Ukraine "as cruel and senseless as any war," but said its geopolitical impact "has a greater dimension and threatens the entire world."

While the pope did not get into how the war, supported by Russian Orthodox Patriarch Kirill of Moscow, is negatively impacting ecumenical relations as well as inter-Orthodox relations, he insisted every Christian church must look at how it may be fomenting tension and how it can contribute to peace.

The war in Ukraine, he said, "cannot fail to question the conscience of every Christian and every church."

"We must ask ourselves: What have the churches done and what can they do to contribute to the 'development of a global community of fraternity based on the practice of social friendship,'" he said, quoting from his encyclical, "Fratelli Tutti."

"This is a question that we need to think about together," he said.

The modern ecumenical movement, and especially the Catholic Church's commitment to it, has its roots in the aftermath of the Second World War, he said. At that time, "the awareness that the scandal of Christian division had a historical weight in generating the evil that poisoned the world with grief and injustice moved the believing communities, under the guidance of the Holy Spirit, to desire the unity for which the Lord prayed and gave his life."

"Today, in the face of the barbarity of war, this longing for unity must again be nourished," Pope Francis said.

The Christian mission to proclaim "the Gospel of peace, that Gospel that disarms hearts even before armies," he said, "will be more credible only if it is proclaimed by Christians who are finally reconciled in Jesus, the prince of peace," and who are "animated by his message of universal love and brotherhood."

Pope Francis also encouraged members of the council in their efforts to plan an ecumenical celebration in 2025 of the 1,700th anniversary of the First Ecumenical Council of Nicaea, "an event of reconciliation," which formulated the creed and settled basic questions about Christ's identity.

The council, he said, "was a synodal act" and showed how synodality marked the life and organization of Christian communities, which, while holding some differences, recognized their unity.

Pope Francis asked the council members to once again remind their national bishops' conferences that in preparing for the Synod of Bishops in 2023, they should "look for ways to listen also to the voices of brothers and sisters of other confessions on issues that challenge faith and 'diakonia' (Christian service) in today's world."

"If we really want to listen to the voice of the Spirit, we cannot fail to hear what he has said and is saying to all those who are born again 'of water and of the Spirit,'" the pope said.