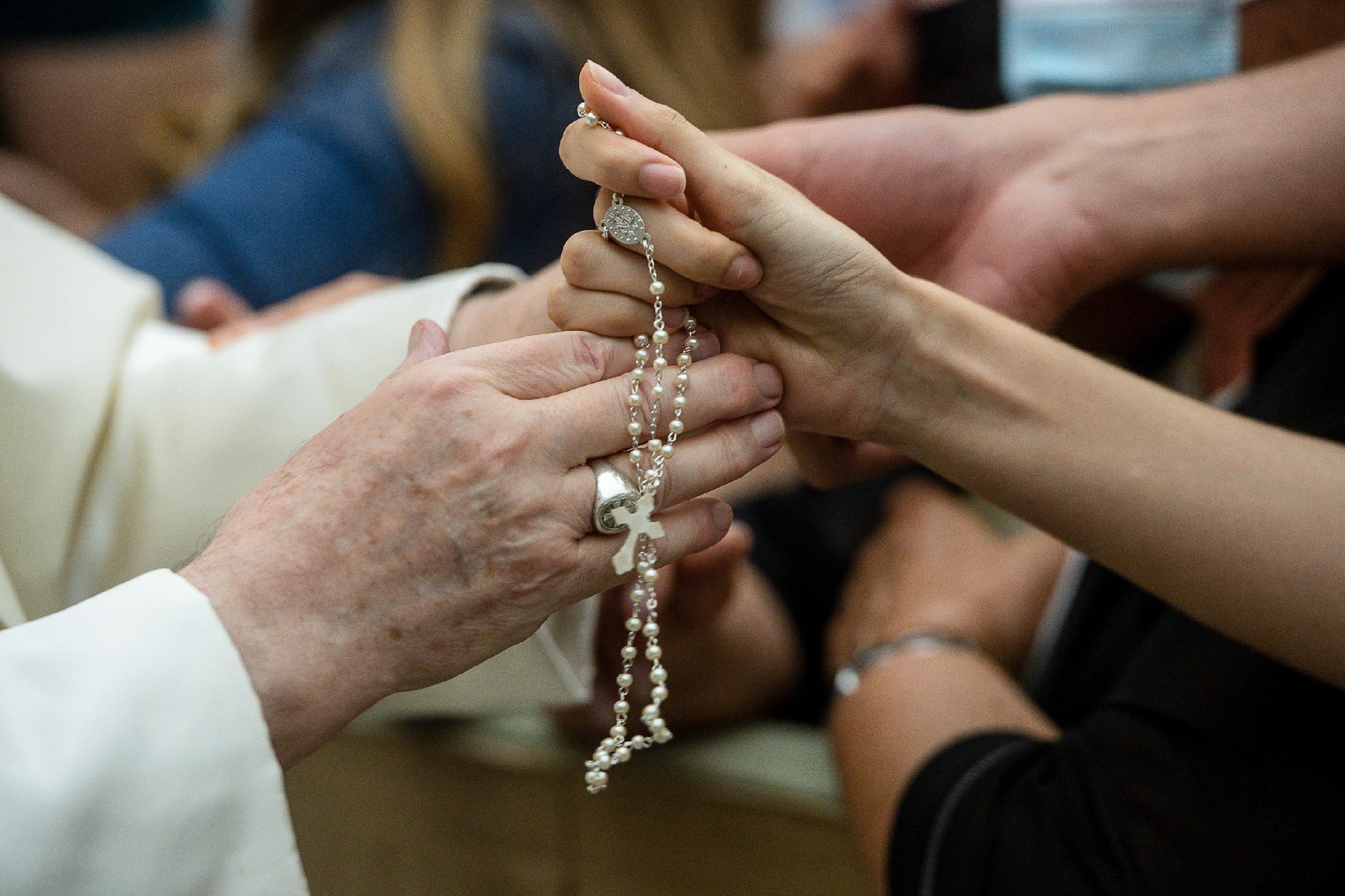 Pope Francis greets a person with a rosary during his general audience in the Vatican's Paul VI hall Aug. 18, 2021. The pope continued his series of talks on St. Paul's Letter to the Galatians. The pope said the law was meant to teach the path toward true freedom and not subjugate people in "a kind of preventive custody." (CNS photo/Vatican Media)

The purpose of the law in Christian life is not to forcibly subjugate others, but to teach men and women the way to obtain true freedom in Christ, Pope Francis said during his weekly general audience.

The "function of the law is certainly positive but limited in time," the pope said Aug. 18 to those gathered in the Paul VI audience hall at the Vatican.

"It cannot extend its duration too far, because it is linked to the maturation of individuals and their choice of freedom," he said.

The pope continued his series of talks on St. Paul's Letter to the Galatians and focused on St. Paul's assessment of the role the law plays in Christians' lives.

St. Paul, the pope said, compares the law to a disciplinarian, which "is a beautiful image that deserves to be understood in its correct meaning."

In the apostle's view, he explained, the role of the law was changed after Christ's death and resurrection. In his Letter to the Galatians, St. Paul wrote that "before faith came, we were held in custody under the law, confined for the faith that was to be revealed.

The pope said St. Paul's use of the expression "under the law" implies "the idea of a negative servitude, typical of slaves."

"The apostle makes it explicit by saying that when one is 'under the law,' it is as if one is 'watched' and 'locked up;' a kind of preventive custody. This period, says St. Paul, has lasted a long time and is perpetuated as long as one lives in sin," he said.

St. Paul expands not only on the law's role of "making people aware of their own sin" but also its capacity to "end up stimulating the transgression."

Yet, for the people of Israel, the law — known as the Torah — was "an act of magnanimity by God toward his people" that protected, instructed, disciplined and supported them "in their weakness," the pope said.

Pope Francis said that for Christians, the law serves the same purpose until "one has come to faith," then it "must give way to another authority."

"It is good for us to ask ourselves if we still live in the period in which we need the law, or if instead we are fully aware of having received the grace of becoming children of God so as to live in love," the pope said.