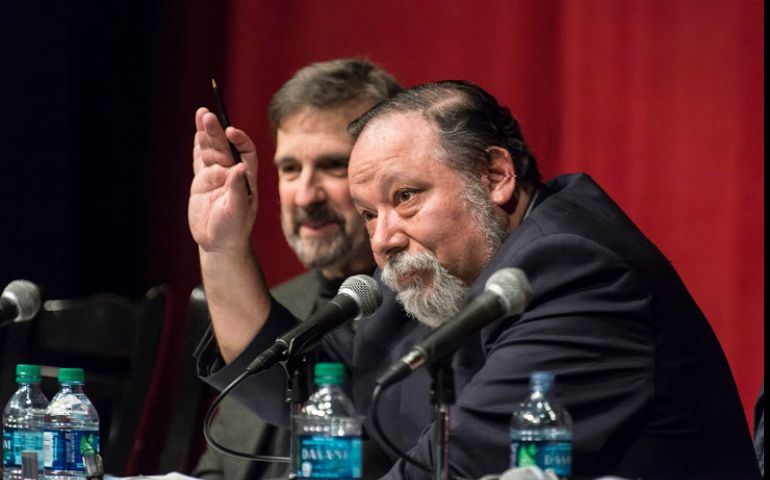 Boston — Following the first Ibero-American Meeting of Theology hosted by Boston College, the theologians and scholars who attended the historic gathering released a written declaration, intended to share the fruits of their deliberations with the church community and general public.

The gathering, they wrote, revealed commonalities among their cultures — Latin America, Central America, the Caribbean, the United States, and Spain — that serve as indicators as to how they might collectively handle the world's current and future challenges.

They broke down today's social questions into three contexts:

All of the above, they noted, "confirm our preferential option for the poor" and call for a "critical discernment of the new styles of 'neo-populist type' " that's emerging through democratic systems throughout the Americas.

With the poor in mind, the statement posed a challenge to the church community brought forth at the conference in the form of a pointed question:

The peripheries are theological places that force theology to ask: When is a people authentically Christian? When it has many churches, or when it rejects poverty? Thus, we ratify our inescapable commitment to our brothers and sisters from the peripheries of society, scourged by poverty and so many forms of social, economic, political and ecclesial exclusion that call for our urgent struggle on behalf of greater integration and inclusion.

Invoking Pope Francis, the 36 theologians and scholars who signed the declaration affirmed that, like a shepherd with his flock, "theologians must smell like their people and their streets; thus the need to pay back the pastoral debt that professional theology has with our poor people." Evangelization, they wrote, is a two-way street, and they, too, must be open to a pastoral and missionary transformation.

In addition to social and cultural globalization, the scholars noted a "globalization of indifference, of indolence," best revealed in today's mass migrations, the "precarious nature of employment," and unjust systems that perpetuate inequality and ignore the poor.

"We have entered a new world stage that some call 'de-globalization,' and that seems to be characterized by our inability to relate as mutual subjects engaged in reciprocal humanizing relationships." In the face of migrants, however, one can respond to the affirmation of human dignity, a culture of encounter, and a practice of compassion. For theology, this presents the opportunity "to build processes of interculturality as a key element in our theological reflection."

The written statement also denounced "the clericalism that disrespects lay people," as "institutional rigidities fail to mediate the merciful images of the God of Jesus and hinder the much-needed process of pastoral conversion in the church." With that in mind, they called for a more intersected theology, crediting the women theologians at the gathering who had especially called on their male counterparts to join the conversation in fighting the oppression of women. They also demonstrated a greater need to pay attention to U.S.-Latino theology, a community that, at this time, faces discrimination both in society and its church.

Concluding the official summary of the first Ibero-American Meeting of Theology, the participants stressed the value of deliberation and reform:

These considerations point out that the synodical reform of the whole Church, in the complexity of its various instances and in creative fidelity to the spirit of the Second Vatican Council, constitutes an inescapable presupposition for the conception of life, mission, and theology of the ecclesial communities. …

Only an institution that is spiritually more evangelical, theologically more consistent, and pastorally more open to sociocultural and religious diversity will be able to respond to the challenges of working for justice, peace, and the care of our common home, from a stance of genuine attention to the most poor and the excluded of our age.