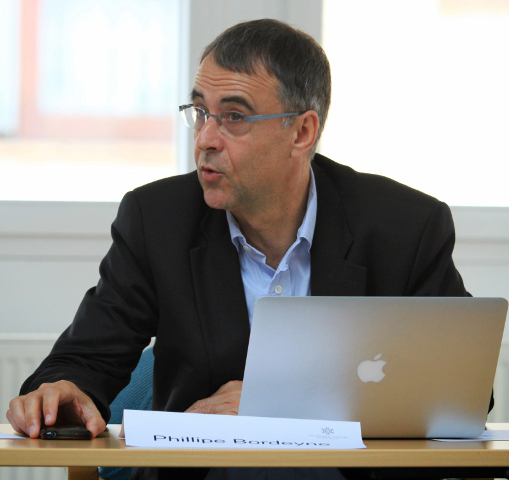 Catholic priests and theologians in Europe cannot use "simplistic ways" of tackling moral questions and must develop a "competence to deal with new thinking" in order to engage secular society, the head of one of France's two pontifical universities said in June.

As Western Europe continues to become more secularized, said Fr. Philippe Bordeyne, theologians must be "faithful to the church teaching but also very faithful to the impulse of freedom."

"I cannot use simplistic ways of tackling moral questions," said Bordeyne, who heads the Institut Catholique de Paris, which was founded in 1875 and grants ecclesiastical and secular degrees.

"There is a need for discourse in moral theology that is really located within the community of faith, but is also located within a tradition of thinking and a competence to deal with new thinking, with philosophers and so on," he said.

Bordeyne spoke to NCR in a wide-ranging, 30-minute interview at the sidelines of a theological conference of European theologians held June 27-29 at Berlin's Katholische Akademie.

Among other issues the university rector discussed:

Bordeyne was appointed to head the Catholic University of Paris by the bishops who sit on the university's board in September 2011 after approval from the Vatican's Congregation for Catholic Education.

A diocesan priest for France's Nanterre diocese, which sits about 7 miles to the west of Paris' city center, he previously served for five years as the dean of the university's faculty of theology and religious studies. He has also served as president of the International Conference of Catholic Theological Institutions.

The Institut Catholique, known in English as the Catholic University of Paris, has six schools for approximately 15,000 students. Among its notable alumni are Cardinals Christoph Schönborn and Franc Rode as well as Matthew Fox, a theologian and former member of the Dominican order known for his progressive views on spirituality.

Following is the full interview with Bordeyne, edited for context and length. Bordeyne spoke in English with occasional pauses for word choice.

NCR: From this meeting, how does the University of Paris fit into Catholic universities in Europe and among pontifical universities?

Bordeyne: We are very much like a Roman university, with the weight of ecclesiastical faculties. But the difference is that we are located in a county that is very much secularized -- and that has been such for over a century. The Catholic University of Paris was founded in 1875, at the end of a century when the Catholic bishops fought for the freedom of education.

For five years, we were allowed to be called a university -- the Université Catholique de Paris. Now, and from 1880 onward, there was a new rule, and the name "university" was reserved to state universities. So we are recognized, but we always have to fight to get recognized as such.

So it's difficult. We are in a situation where the existence of the church as leading higher education is never taken for granted. This is the difference with Rome.

Compared to the pontifical universities in Rome, I would say that the bishops or religious superiors that send us priests or religious to study in Paris, they choose those who they think will benefit from this climate of discussion with the secular society.

Something that one of the priests said during the meeting was sometimes there's a fear of going to a place and identifying yourself as a priest. You responded that this is not so much the case anymore. What do you mean when you say that?

First of all, the young generation -- those who become priests -- they don't understand at all the generation of priests who are underground. They can't stand that anymore.

Underground? What do you mean?

The new generation has a sense of being a minority as engaged Christians. As the rector of the university, I'm sensitive to this. But also in the secular society, if you don't tell the truth about your motivation -- being a priest, for me, or being a theologian -- people don't believe you. They say, "He or she hides something that is vital in his or her way of thinking or reasoning."

Whenever you say or show that you are a priest, they say, "Well, I know how he thinks." So you have to break this false idea. But if you hide it, it's no longer possible.

I cannot use simplistic ways of tackling moral questions. There is a need for discourse in moral theology that is really located within the community of faith, but is also located within a tradition of thinking and a competence to deal with new thinking, with philosophers and so on.

We are a Catholic university within a secular society, so we have to keep those two fundamentals: being Catholic in an open world.

You mentioned the moral theologian has to talk about freedom. A lot of the discussion here has been about dialogue, especially with the Vatican's Congregation for the Doctrine of the Faith. How do you see that dialogue? How do you model that in terms of freedom, authority and conscience?

Very often, I have to write with some expertise on some subjects for the conference of bishops. There was one year of reflections on family questions. I was called as an expert; [I] worked for one year with the bishops' committee.

It's true that among bishops, they don't tackle moral questions the same way. They don't differ on the doctrine, but they differ on the pastoral way of getting to dialogue with the society.

So probably some bishops would not call me as much as others, because we represent a tradition of pastoral moral theology. Gaudium et Spes [the Second Vatican Council constitution on the church in the modern world] was written mainly by French and Belgian theologians.

In fact, I wrote my doctoral dissertation on Gaudium et Spes, and I worked on the archives of Pierre Haubtmann, who was the last redactor. He's not very well known. After the council, he became the rector of the Institut Catholique, so we have the archives. And I didn't know I would become one of his successors.

I'm in that tradition, very much. But not only I -- many bishops are also in this tradition. They look for theologians that are really scholars, that have studied, that are open to other countries. They want their help when there's a difficult question in the diocese.

One of my specialties is marriage. So last week, I was called by one bishop who has a bunch of young priests who have a formation gathering twice a year. And the bishop was there. He listened to me. There were difficult questions like, "What do you do when two people come for the sacrament of marriage who have had an abortion?"

The priests didn't know how to tackle this, so we have discussed it. This is very important. And even those more traditional young priests, after a few years of ministry, they found they're not looking for preformatted answers. They know it doesn't work. They want the light of tradition, of the Bible, of discernment.

The problem is that we are not very many. That's the problem in France -- there is a shortage of theologians and so on. So we don't have much time to do so. But otherwise, there is no problem because we work together.

Thinking of that drama, there is a priest in Austria, Fr. Helmut Schüller, who is calling for more lay participation in the church, even the ordination of women as priests. Are you open to those ideas, of looking at empowering laypeople in this situation?

It's true, there is a generation that has had the first interpretation of the Second Vatican Council. And now they don't recognize the years following the council. That is true -- there's a bunch of nostalgics, there is.

The doctrine of participation of laypeople to mission, we have it. And we have the experience of doing it. We are not courageous enough to say to Catholics that in order to achieve such programs of evangelization, we need to pay people. They have a family, we need a decent salary. If I had something to change, that would be really it -- to organize things so that they don't only remain a good idea.

For this meeting, I discovered people I don't know from the Czech Republic, Croatia -- I felt very much that we share poverty. It's not like Belgium or Germany where the church benefits from state universities or gets paid by the administration. This is not the case in France.

So we have a tradition of simplicity. I really well understand the experience. It's our culture also.

You had said several times at this meeting that a key thing theologians need to do is help younger scholars emerge. What are ways you're going to seek to do that, not just in Paris but across Europe?

In Paris, we have many [former students] around the world -- in Asia, in Africa, in Latin America. I took the responsibility as the president of the university to develop an alumni platform that we did not have. I have a group of two people working on this project. It will open in November.

I really hope that this platform will help our former students to exchange with current teachers. And what we've been doing for several years is having trips of teachers -- we went to India, we went to Korea, we went to Vietnam, we went to Benin. And whenever we get there, we gather the alumni there and we listen to them. For the teachers, this is very important because we learn a lot from this experience.

In 1215, teachers were only moving around Europe. Now, it's worldwide. Before being chosen as rector, I was supposed to take a sabbatical, with one month in Vietnam, one month in India, one month in Benin and six months' study at Boston College.

That, for me, is the future. We have received students here. We owe them some further teaching where they are now. In 2015, I hope we can gather alumni and reflect on Paris as a school for theology, 800 years ago. That's a long time.