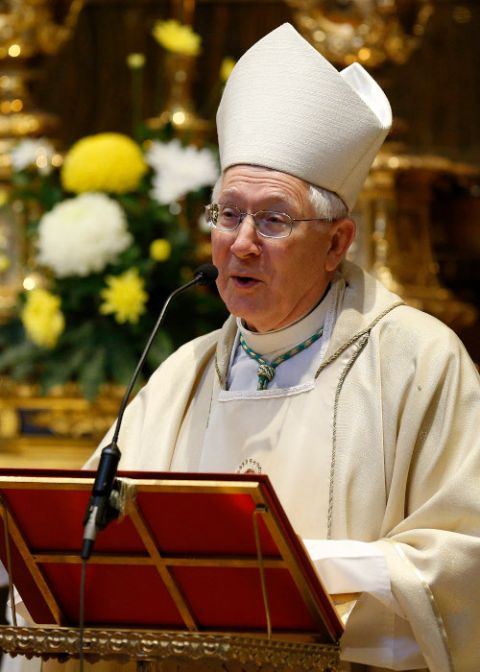 Archbishop Leonard P. Blair of Hartford, Conn., chairman of the U.S. bishops' Committee on Divine Worship, gives the homily as he concelebrates Mass with other U.S. bishops from the New England states at the Basilica of St. Mary Major in Rome Nov. 4, 2019. He has advised U.S. bishops that administering the sacrament of reconciliation via cellphone is impermissible under church teaching. The issue has been in the spotlight as priests try to minister to the sick and dying in hospitals but cannot visit them amid the pandemic. (CNS/Paul Haring)

Washington — Administering the sacrament of reconciliation via cellphone is impermissible under church teaching, said the chairman of the U.S. bishops' Committee on Divine Worship.

In a March 27 memo to his fellow bishops, Archbishop Leonard P. Blair of Hartford, Connecticut, said he was informed by Archbishop Arthur Roche, secretary of the Congregation for Divine Worship at the Vatican, that using a cellphone for the sacrament poses a threat against the seal of confession.

Even the use of a cellphone to help amplify the voices of a confessor and penitent who can see each other is not allowed, the memo said.

Blair also said in the memo that in regard to anointing of the sick, the duty cannot be delegated to someone else, such as a doctor or nurse.

Citing the Catechism of the Catholic Church, Blair noted, however, that when it is not possible for a priest to administer the sacrament of reconciliation, it is appropriate for a someone to seek absolution from sin by offering a "perfect contrition, coming from the love of God."

Such contrition, the catechism continues, "expressed by a sincere request for forgiveness ... and accompanied by 'votum confessionis', that is, by the firm resolution to have recourse, as soon as possible, to sacramental confession, obtains forgiveness of sins, even mortal ones."

Blair wrote that the same standard can be applied to the sacrament of the sick.

Questions about such practices arose in response to recent circumstances stemming from the widening transmission of coronavirus.

In the Archdiocese of Portland, Oregon, a priest prohibited from visiting patients hospitalized in isolation made telephone contact with a hospitalized COVID-19 patient who was on a ventilator and whose family had asked the cleric to administer last rites. The priest led the patient through the process of an act of contrition and a prayer for forgiveness.

Elsewhere, Bishop Mitchell T. Rozanski of Springfield, Massachusetts, March 25 allowed nurses to administer holy oil to seriously ill patients as long as an assigned Catholic hospital chaplain was standing away from the bed or outside a patient's room. The policy allowed chaplains to offer prayer via cellphone to patients who were alert.

Rozanski reversed his decision March 27 and told priests he had suspended the sacrament of the sick throughout the diocese while he "reviews appropriate procedures that can allow it to be safely administered," diocesan spokesman Mark Dupont said in an April 1 statement.

The prior method on administering to the seriously ill "was based on erroneous information provided to Rozanski. As soon as he learned of this error he stopped the practice — which was only in place for less than 48 hours. It is unclear whether it was ever actually utilized."

"In the end, Rozanski is responding to concerns raised by both our clergy and area hospitals," the statement said. "These concerns include the limited supply of personal protection gear as well as clergy contracting and in turn inadvertently spreading the virus," Dupont said.

"I know most priests would willingly undertake the risk upon themselves," he added, "but as we have tragically learned given the insidious nature of how the COVID-19 virus spreads without proper precautions this would extend that risk beyond just the individual priest to everyone with whom he came in contact with."

My reluctant gratitude for technology this Thanksgiving

Renewal of papacy will transform church