Those devoted to Blessed Kateri 'walking on air' about canonization 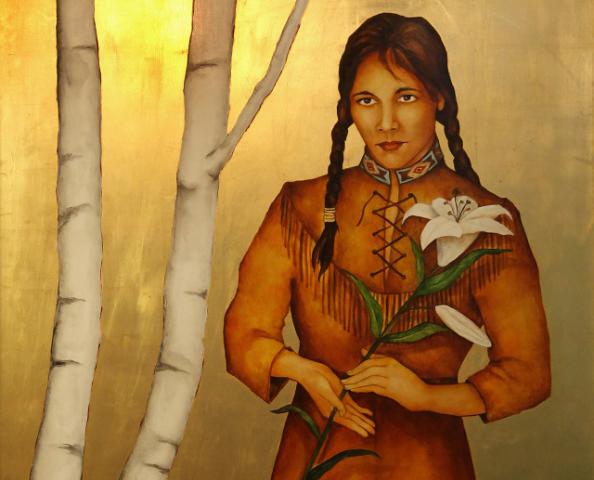 A painting of Blessed Kateri Tekakwitha by Meltem Aktas hangs in the chapel at Loyola Academy in Wilmette, Ill. She is to be canonized by Pope Benedict XVI on Oct. 21. (Karen Callaway/Catholic New World)

SYRACUSE, N.Y. -- Since first learning in December that Blessed Kateri Tekakwitha was to be canonized, the head of a committee named for her in the Syracuse Diocese said those who have a devotion to the saint to be "are walking on air."

"I can't tell you how excited we are," said Emily Garrow-Stewart, a Mohawk who grew up hearing Blessed Kateri's story in her home.

"She has been a part of my life since I was a child," she said. "There was always a picture of her in the house. She is such a good role model and example. In my mind, there is always such a light about her."

Blessed Kateri, known as "the Lily of the Mohawks," was born to a Christian Algonquin mother and a Mohawk father in 1656 along the Hudson River in what is today upstate New York. She was baptized by a Jesuit missionary in 1676 when she was 20. A year later she fled to Canada and died there in 1680.

Her sainthood cause was opened in 1932, and she was declared venerable in 1943. In June 1980, she became the first Native American to be beatified.

In December, Pope Benedict XVI advanced the sainthood causes of Blessed Kateri and Blessed Marianne Cope of Molokai by signing the decrees recognizing the miracles needed for their canonizations. On Feb. 18, the pope announced they would be canonized at the Vatican Oct. 21, along with five others.

Sr. Patricia Burkard, general minister of Blessed Marianne's order, the Sisters of St. Francis of the Neumann Communities, said in a statement released the same day that the sisters "have been in joyful anticipation of hearing the date" since December. Learning of it, she said, "completes the cycle of 37 years of efforts to get us to this moment. We now go forward in joyful anticipation with the next steps of planning."

Blessed Kateri will become the first Native American saint. This is the fulfillment of a long-held dream for many in the United States and Canada.

In the Syracuse Diocese, the Kateri Tekakwitha Committee was formed in 1978 as part of an initiative to engage the Native American community in the diocese.

The committee, made up of Native American and non-Native members, works to evangelize in Blessed Kateri's name by caring for the sick, elderly, bereaved and lonely, and through outreach to young people.

Garrow-Stewart, who chairs the committee, said she has seen many examples of her intercession in her own life, most recently when her son faced a serious medical procedure.

"I never prayed so hard," she told The Catholic Sun, the diocesan newspaper, in an interview before the pope announced the canonization date. "That is when she is with you, though, when you are really down. I know she is always around me. I feel her in my life always." Her son, she said, is on the mend.

Others connected with the committee have known Blessed Kateri's presence as well.

Jim Howe, a parishioner at St. Ann's Church in Manlius, knew something of Kateri when growing up, but said his first real experience with her came when his infant daughter was diagnosed with cancer.

"I'm not sure why, but in those dark days of dealing with her illness and hospitalization, I said a prayer to Kateri, asking for her help. My daughter survived ... and today is a healthy college student who hopes to be a pediatric cancer specialist herself," he said.

Though he can't prove any divine intercession, Howe said the experience led him to spend about 10 years on the committee, where he was able to learn more about her life, the life of Native Americans in the region, and the importance of Kateri in the lives of the Mohawk community.

Sr. Kateri Mitchell, a Sister of St. Ann and executive director of the Tekakwitha Conference National Center in Great Falls, Mont., said hearing the date announced for the canonization for Blessed Kateri "was for me one of great joy."

She told Catholic News Service in a Feb. 22 email that it also brought "a real sigh of relief that at last many of her sisters and brothers will gather as church at the Vatican to give praise and thanksgiving to our Creator who has gifted us with a model in the person of this young indigenous woman who emulates a life of holiness by her deep faith, prayer life and close relationship for a God who is her all."

Fr. Wayne Paysse, executive director of the Washington-based Black and Indian Mission Office, noted in a Feb 21 statement that her canonization will be "one of the first actions of the church during the Year of Faith, which begins next Oct. 11."

"Surely this is a signal to us that soon-to-be St. Kateri Tekakwitha is for all of the church both a model of faith and of the new evangelization," he said. "For now, let us continue to pray to God for all we need, firm in the knowledge that Blessed Kateri is interceding for us from her place in heaven."

In Canada, Prime Minister Stephen Harper said Blessed Kateri's canonization "will be a great day for Canadian Catholics and a deep honor for our country." She is entombed at St. Francis Xavier Mission in Kahnawake (Caughnawaga) in Quebec.

Archbishop Richard Smith of Edmonton Alberta, who is president of the Canadian Conference of Catholic Bishops, said Canadians "rejoice together with our American brothers and sisters in this joyful news."

He noted that Blessed John Paul II described Blessed Kateri as "an example of fidelity ... a model of purity and love."

Those devoted to Blessed Kateri 'walking on air' about canonization