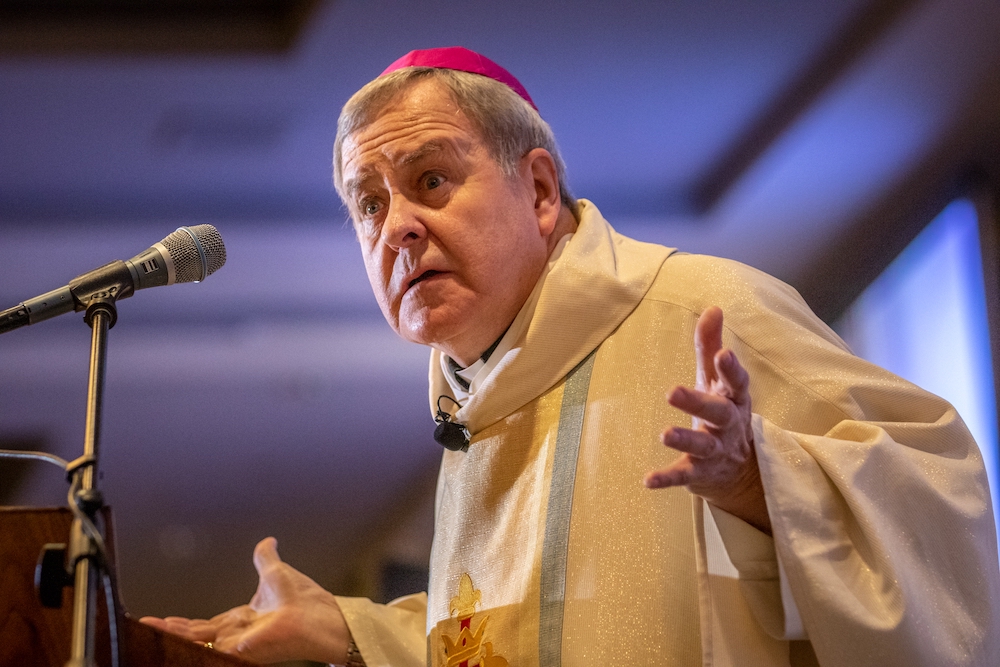 As one of his last acts leading the Catholic Church in St. Louis prior to retiring, Archbishop Robert Carlson issued a letter July 31 wading directly into transgender issues.

The document, called "Compassion and Challenge," called on Catholics to "lean in with compassion" when encountering transgender people. But it also asserted that "Catholic understanding of the human person holds that sex and gender cannot be separated, and that there are limits to how we should manipulate our bodies."

Transgender issues are an emerging flashpoint for the hierarchy. The Vatican waded into the issue with the February release of the document "Male and Female He Created Them," drafted by the Congregation for Catholic Education.

In his letter, Carlson discussed transgender identity in terms of ideology and letting feelings or desires determine personal identity. He wrote that transgender people not be denied admission to Catholic schools or parish and diocesan events, provided they follow guidelines.

"Must we show understanding and compassion? Yes, always!" he wrote. "Does that mean compromising what Jesus offers … Or accepting false dichotomies, like a division between the sex a person has and the sex a person wants to have, or wants others to perceive the person as having? No, never."

Carlson said in his document's introduction that the genesis of the project was his ad limina visit with Pope Francis in January, during which he said the pope asked the bishops to address "transgender theory/gender ideology."

Since the release of Carlson's document, it was reported that Francis had written to an old friend, a religious sister in Argentina who ministers to the transgender community, telling her that God "will repay you abundantly."

In the United States, this ministry was pioneered by Kentucky-based Dominican Sister of Peace Luisa Derouen, who has ministered to transgender people for 21 years, under a pseudonym for many of those years.

Derouen told NCR the renewed attention to transgender issues stems from the fact that they continue to turn up in Catholic settings, including parishes, universities and hospitals. This, she added, does not mean there is eagerness to listen to the experiences of transgender people.

"At the most fundamental level, to take transgender people seriously challenges [the bishops'] understanding of what it means to be human," she said.

Members of the transgender community contacted by NCR shared the view that Carlson's letter was right to begin on a note of compassion for a segment of the population — an estimated 700,000 Americans, at least — who suffers heavily from suicide, depression, anxiety, substance abuse and exploitation.

But when it comes to addressing the transgender experience beyond that, the praise drops off.

Courtney Sharp, a transgender woman who is the first transgender person Derouen ever met in her ministry, said that Jesus did not begin his encounters with people with the words: "Here's my problem with this."

"You're never going to understand me as a person if you don't walk with me," said Stephanie Battaglino of Palm Desert, California. "Understanding who we are as human beings isn't an overnight thing."

Battaglino, a transgender woman who was active in her New Jersey parish and the Knights of Columbus prior to transitioning in 2005, bemoaned that the letter "can serve as a model for other bishops to do the same thing."

"Where's the dialogue in that?" she asked. "There isn't."

"You can't treat someone with compassion whose fundamental existence you think is wrong," said Magdalene Visaggio, 35, a New York-based comic book artist and transgender woman who attended seminary prior to coming out. 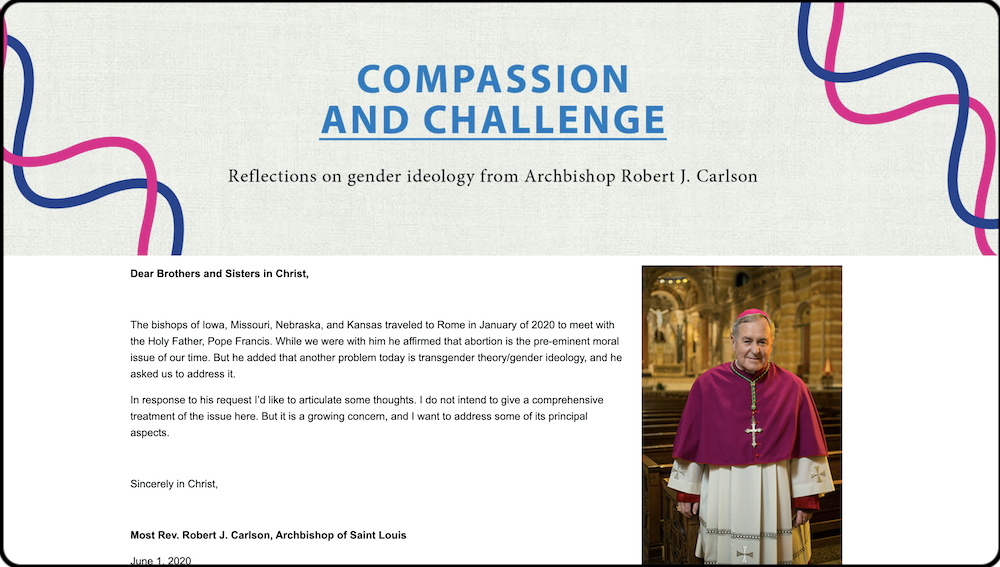 Visaggio said a priest once told her that receiving the Eucharist would be out of the question if she transitioned. "Because the Eucharist was more important to me, I hung on for 14 more years," she said.

In "Compassion and Challenge," Carlson wrote: "Following Jesus isn't easy. As we take up the task each of us will have our own cross to carry."

Visaggio takes issue with the assumption that transgender people have no choice, noting that she transitioned not because she wanted to be a woman, but because she didn't want to kill herself.

"At no point did I ask for this. I fought it with every ounce of strength I have. I went through 31 years of hell, and the church makes no effort to support people who are going through that," Visaggio told NCR.

While Visaggio said being Catholic was the dominant thread of her identity for most of her adult life, she left the church after transitioning.

"I never questioned in terms of whether I thought God would love me and support me in transitioning," said Kelsey Pacha, 34, a transgender man who lives in the San Francisco Bay area and who works as a consultant to institutions on transgender issues.

Pacha, who grew up in a devout Catholic family in Iowa, no longer identifies as Catholic, which he noted is "for my own survival."

In dealing with church congregations, Pacha asks: "What is the fruit that you are bearing when you reject people who are transitioning?"

Nodding to statistics from the American Academy of Pediatrics that some 40% of non-binary American youth have attempted suicide, Pacha said the answer to his question is: "That we die."

And when it comes to transgender people being rejected by their family, "there's a huge overlap with religiosity," he said.

Against ideology and dualism

In his guidelines for the St. Louis Archdiocese, Carlson said that "people should be addressed and referred to with pronouns that are consistent with their biological sex in all Catholic programming and events."

His noted elsewhere in the document: "Gender ideology would have us believe that the body can and should be re-shaped according to our desires, and that we can ignore or override the biological differences between women and men."

Sharp, who is based in New Orleans, said using the word "ideology" does not describe her experience. "Every time I see that, I know that there's a lot behind it," she said. "The key is always survival. I am trying to survive."

"That further adds to the trauma," Michael Sennett of Boston, a 24-year-old transgender man, said. "I don't think it's helpful to approach transgender individuals like that, especially trans Catholics, who have already received a lot of negativity from the church, who already feel unwelcome."

Lisa Fullam, professor of moral theology at the Jesuit School of Theology at Santa Clara University, said that while Carlson follows the lead of the Vatican's document, "he's taking it a step further than they did."

Fullam noted that the Vatican's document gave institutions room for discernment in how they proceed, but said Carlson "tries to shut that down."

Carlson said that his arguments are rooted in science.

"Sexual identity is written into every level of our physical being, from chromosomes to hormones to anatomy," said the archbishop. "We are called to integrate those realities into the psychological and spiritual aspect of our lives, not override them."

Fullam noted that while the definition of sex as a binary construct is integral to Catholic teaching, the Vatican document recognized the need to follow science, such as stating: "in cases where a person's sex is not clearly defined, it is medical professionals who can make a therapeutic intervention."

"Pope Francis pushes back a little bit against this strong notion of gender ideology," Fullam said, citing the 2016 apostolic exhortation Amoris Laetitia, where the pope said masculine and feminine "are not rigid categories."

Carlson also said the church can never approve hormone treatments or surgeries, that Catholic hospitals can never perform them and that, they are, "in the end, a false hope because it is not rooted in the truth about the body."

"In Catholic anthropology, we have to make a space for how the body and the soul and spirit intersect," she said.

Pointing to her own work ministering to hundreds of transgender people, Derouen said: "They are who they say they are." 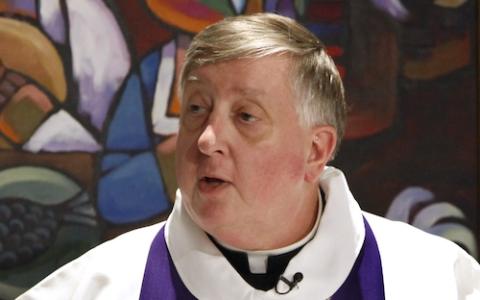 Dialogue at the margins

Carlson's letter didn't appear publicly until seven weeks after Francis had accepted the archbishop's resignation and less than four weeks before the Aug. 25 installation of Carlson's successor, Archbishop Mitchell Rozanski.

Reached for comment, the St. Louis Archdiocese said the timing of the release simply reflected the completion of the document and that its purpose "is not to develop policy, but to give people a basic starting point to guide the conversations that are already happening in parishes and schools, and address questions and needs in those communities.​"

On the question of possible future dialogue with the transgender community, Rozanski told NCR he "will be exploring some options."

While Carlson's letter heralds the influence and inspiration of Francis in tackling questions of gender, the idea of applying the pope's rhetoric of a church that accompanies and listens to marginalized people is a source of hope and frustration for transgender Catholics.

"He's trying to ride the fence on some level," said Battaglino. "The dialogue that you have, in many respects, needs to mirror the journey of the trans person to one's true self."

Battaglino, whose return to the church was made possible by the role of Derouen in her life, managed to bring together both Derouen and Francis during the pope's 2015 visit to the U.S. Battaglino got tickets to the welcoming ceremony at the White House and invited her friend to join her.

They stayed with sisters in suburban Maryland and shared a meal in community the night before.

"This was kind of new to me," said Battaglino of dining with representatives of the church who were compassionate and wanted to know her story.

In some places, the conversation is continuing. After graduating college in 2018, Sennett found a job on staff at a parish near Boston College.

"I wanted to continue to grow in my faith life and my faith journey. It was a little nerve-wracking going in," said Sennett, who came back to his Catholic faith his junior year of high school, the same year he came out as trans.

Quick to note that he doesn't speak for his parish, he said: "I was lucky to find a place where I felt very welcome for my whole self."

Pacha sees attitudes of younger generations as what could ultimately lead to a long-term change in how the church relates to transgender people.

"There will be a ready network of resources and … spiritual leaders who can support that process," inside and outside Catholicism, should that happen, he said.

In the meantime: "We have a relationship with God … . It is appropriate and it is OK to turn directly to God and really meditate and feel into where is God in this? … That is also theologically supported by the tradition. That's why we have primacy of conscience."

But rather than living in fear of being rejected by congregations or authorities, Sennett has hopes for the role of dialogue and encounter with his fellow Catholics.

"Perhaps they'd be a bit more sensitive, because I think if they actually knew transgender Catholics and knew of our conviction and of our faith, I think we could learn from each other," he said. "I would love to have a conversation with bishops, if they would ever be open to hearing it."

Sharp is cautious: "It's going to be a long, hard discussion. Where it ends up, I don't know. All of us should invite the Holy Spirit in."

A version of this story appeared in the Sept 18-Oct 1, 2020 print issue under the headline: Transgender Catholics criticize retiring archbishop’s letter on 'gender ideology'.