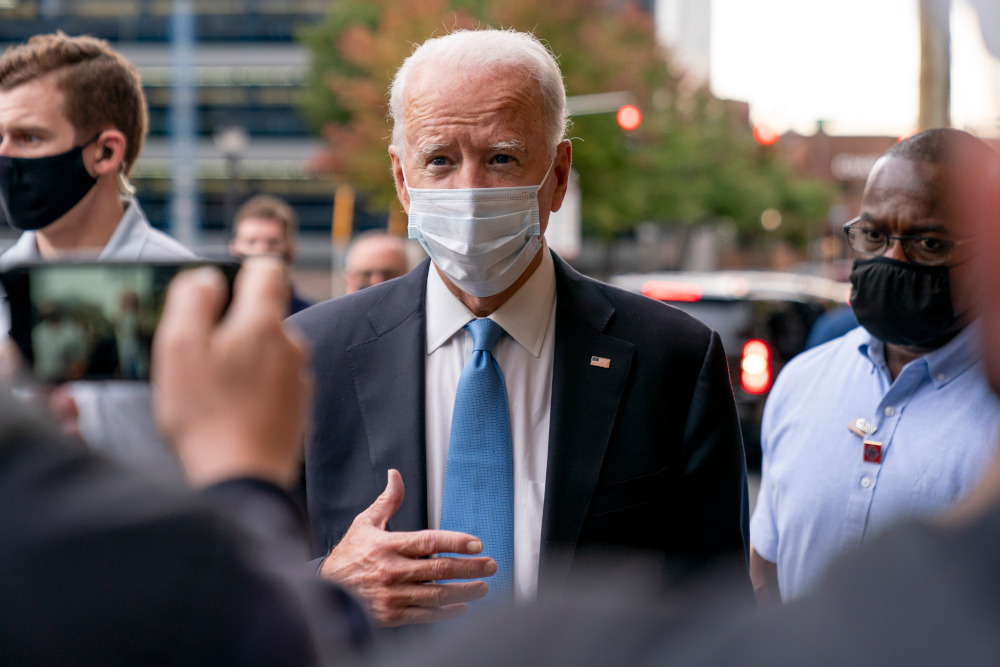 Democratic presidential candidate former Vice President Joe Biden stops to speak to members of the media as he walks out of the Queen Theater in Wilmington, Del., Thursday, Oct. 1, 2020, after pre-taping his speech for the Al Smith dinner. (AP/Andrew Harnik)

President Donald Trump and former Vice President Joe Biden appealed to the nation's Roman Catholic voters on Oct. 1 during a charity dinner that traditionally has been used to promote collegiality and good humor.

But in the face of a pandemic and economic woes for millions of Americans, there was no joking at this year's Alfred E. Smith Memorial Foundation Dinner, which went virtual because of the coronavirus. The event comes as Biden and Trump make fierce plays for Catholic voters, a large swath of the electorate that spans the U.S. political spectrum, including a significant slice of swing voters in battleground states.

Trump's appearance at the dinner four years ago along with Democratic rival Hillary Clinton produced some laughs, but several cringe-worthy moments, too. When Trump described Clinton as corrupt, he crossed the line for many of those in attendance and was booed loudly.

On Thursday, Trump sought to highlight his administration's accomplishments benefiting Catholic voters. He noted that hundreds of millions of dollars in federal pandemic relief funds went to parishes around the country through forgivable Paycheck Protection Program loans. "I hope you remember that on Nov. 3," Trump said. "But I got it for them."

For his part, Biden, who is Catholic, said his time in politics has been guided by the tenets of Catholic social doctrine: "What you do to the least among us, you do unto me."

"We have a responsibility to future generations, and that's the charge before us today," Biden said.

Trump also emphasized his nomination of Amy Coney Barrett to the Supreme Court. He noted that she graduated from the University of Notre Dame Law School and was praised by one of her professors as his top student.

"We will not stand for any attacks against Judge Barrett's faith. Anti-Catholic bigotry has absolutely no place in the United States of America. It predominates in the Democratic Party," Trump said. "And we must do something immediately about it, like a Republican win, and let's make it a really big one."

Some Barrett supporters have cast criticism of her as anti-Catholic. They have seized on comments from California Sen. Dianne Feinstein, the top Democrat on the Senate Judiciary Committee, who said during Barrett's confirmation hearing for appellate judge three years ago that "when you read your speeches, the conclusion one draws is that the dogma lives loudly within you." 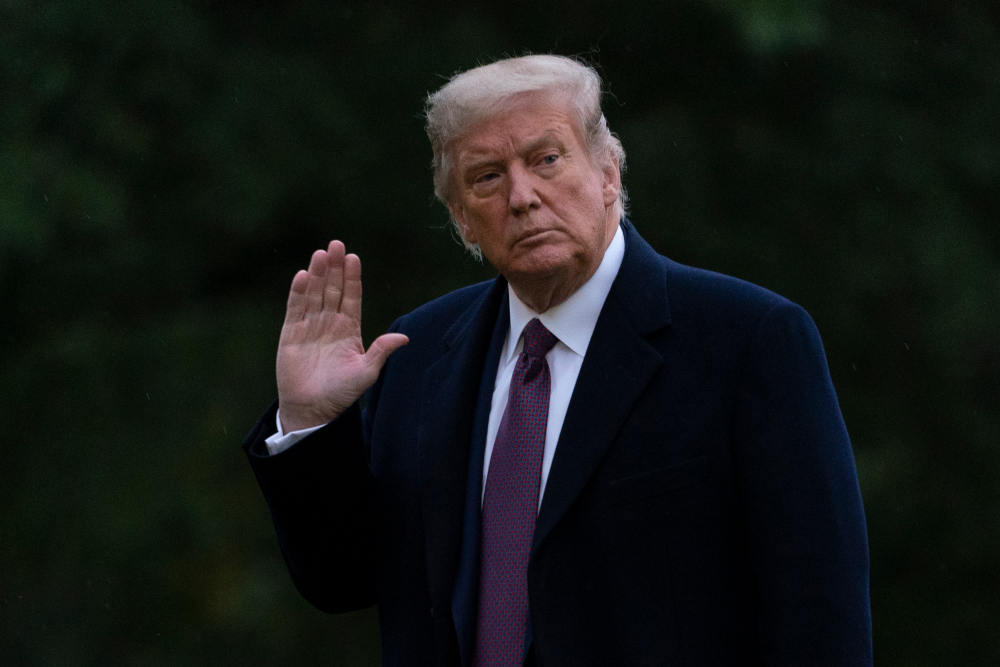 President Donald Trump waves as he walks from Marine One to the White House in Washington, Thursday, Oct. 1, 2020, as he returns from Bedminster, N.J. Trump and first lady Melania Trump have tested positive for the coronavirus, the president tweeted early Friday. (AP/Carolyn Kaster)

Biden spoke of his personal losses over the years, with his first wife and daughter dying in a car crash just as his political career was beginning and his son Beau dying of brain cancer while he was serving as vice president in the Obama administration.

"I know, for me, my Catholic faith has helped me through the darkness as I've had to bury pieces of my soul deep in the earth, and eventually found purpose to live a life worthy of those I lost," Biden said.

He called on Americans to be hopeful despite the pandemic and recalled meeting Pope Francis when the pope was at the White House in the months following Beau's death.

"Pope Francis took the time to meet with my entire family to help us see the light through the darkness," Biden said.

The dinner raises millions of dollars for Catholic charities and has traditionally shown that those vying to lead the nation can get along, or pretend to, for one night.

The event has become a tradition for presidential candidates since Richard Nixon and John F. Kennedy appeared together in 1960. In 1996, the Archdiocese of New York decided not to invite then-President Bill Clinton and his Republican challenger, Bob Dole, reportedly because of Clinton's veto of a late-term abortion ban.

This year, Cardinal Timothy Dolan said he was grateful for the two men speaking at the virtual dinner, and, with a nod to the coming election, said, "I also dare remind them that Al Smith was a happy warrior, that he was never a sore loser."