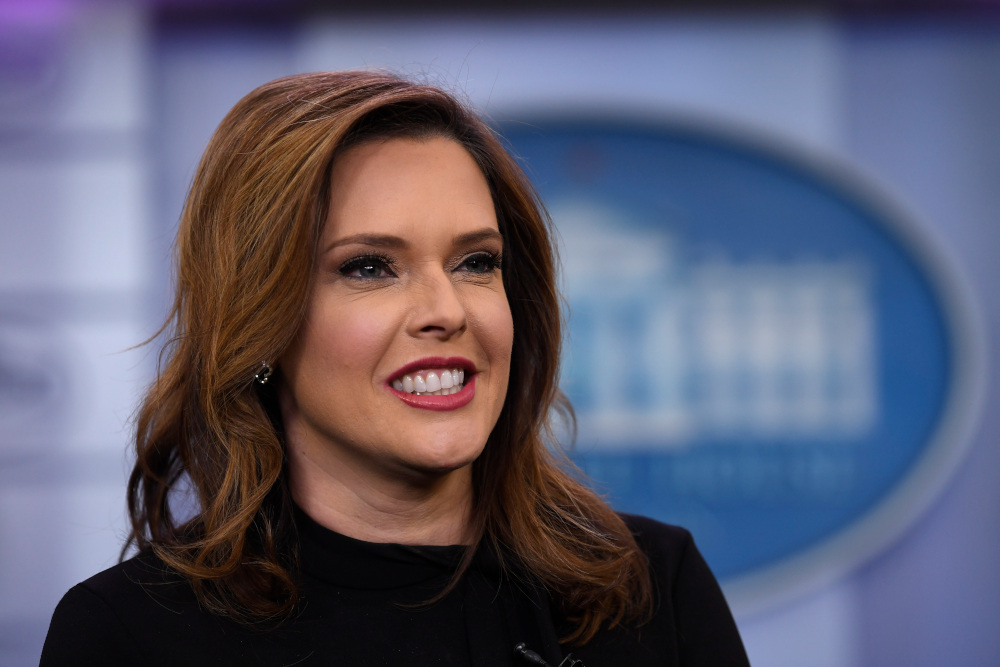 In this Jan. 29, 2019 file photo, Communications adviser Mercedes Schlapp speaks during a television interview in the press briefing at the White House in Washington. President Donald Trump’s reelection campaign is ramping up its courtship of Catholic voters ahead of a likely November matchup against a devout Catholic Democrat, former Vice President Joe Biden. The campaign previewed its message at a Thursday, April 2, 2020 launch of a “Catholics for Trump” coalition, touting the president’s religious freedom record and anti-abortion policies. (AP Photo/Susan Walsh)

President Donald Trump's reelection campaign is ramping up its courtship of Catholic voters ahead of a likely November matchup against a devout Catholic Democrat, former Vice President Joe Biden.

The campaign previewed its message at a April 2 night launch of a "Catholics for Trump" coalition, touting the president's religious freedom record and anti-abortion policies. In a sign of how significantly the coronavirus has upended the presidential race, the event also featured Trump backers promoting his response to the pandemic – with one describing it as aligned with Catholic teaching about solidarity.

Ahead of a general election where Catholics could prove to be vital swing voters, particularly in the Midwest, the coalition launch indicates that Trump doesn't plan to limit his faith-based outreach to evangelicals who have long been a key part of his base. But Biden, who's frequently invoked his faith on the Democratic primary trail, could bring a unique advantage with Catholic voters to this fall's contest.

At the heart of the competition for Catholic votes in November is the question of how many in the faith view abortion as the primary driver of their political engagement. Pope Francis has urged Trump to adopt an immigration stance consistent with his "pro-life" identity, and progressive Catholics have decried Trump's approach to issues from health care to climate change as inconsistent with their church's teachings.

Trump's campaign, however, billed his embrace of anti-abortion policies prominently in their materials on its Catholic outreach kickoff. The event featured Fr. Frank Pavone, national director of Priests for Life, a staunch anti-abortion advocate who displayed an aborted fetus in a 2016 online video that discussed his support for Trump.

Pavone said in an interview that while Trump is "trying to protect the right to life," the president is acting on other issues in ways "completely consistent with Catholic teaching."

"He's protecting our people by strengthening borders, not to stop immigration but to stop crime, to protect families, to protect neighborhoods," Pavone said.

Also joining the April 2 kickoff were Mercedes Schlapp, a senior communications adviser to the campaign, and husband Matt Schlapp, chairman of the American Conservative Union and a co-chair of the new Catholic outreach effort.

Mercedes Schlapp, a former White House communications adviser, described Biden as "an extremist" on abortion during the event. Republicans saw an opening to peel off Biden's Catholic support last year when the former vice president, who often talks about his Catholic school upbringing, ended his decades-long support for limiting federal funding of abortion. 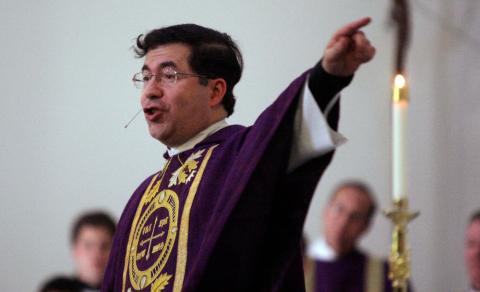 In this March 31, 2009 file photo, Rev. Frank Pavone, head of Priests for Life, gives the Homily during a mass at Ave Maria University's Oratory in Naples, Fla. President Donald Trump’s reelection campaign is ramping up its courtship of Catholic voters ahead of a likely November matchup against a devout Catholic Democrat, former Vice President Joe Biden. The campaign previewed its message at a Thursday, April 2, 2020 launch of a “Catholics for Trump” coalition, touting the president’s religious freedom record and anti-abortion policies. (AP/Naples Daily News/Greg Kahn)

The campaign is poised to get outside help in its work to turn out churchgoing Catholic voters from the nonprofit CatholicVote.org, which is investing in mobilizing that bloc with a pro-Trump message.

The group's senior political adviser, former Kansas GOP Rep. Tim Huelskamp, is also a member of the Trump campaign's Catholic outreach project. Huelskamp criticized Biden for failing to live out his faith, while "you've got a non-Catholic in Donald Trump who's delivering on Catholic social teaching and principles."

John Gehring, Catholic program director at the liberal-leaning group Faith in Public Life, challenged that assumption. Promoting Trump's anti-abortion record to Catholics but ignoring the president's proposed cuts to immigration and aid for the poor "isn't how traditional Catholic teaching asks us to think about protecting life," Gehring said.

"Being pro-life isn't about a single issue for our church. Our church teaches that respect for life has to be consistent."

A Biden campaign adviser working on faith outreach agreed that Catholic voters are more inclined to take the "more holistic worldview" of supporting life that the likely Democratic nominee has adopted, rather than a singular focus on abortion.

The adviser, speaking candidly on condition of anonymity, said that one template for the Biden camp's Catholic outreach heading into a general election would be its efforts ahead of February's Iowa caucus, which included phone banks and house parties focused on turning out the Catholic vote.

"Our best asset" in reaching out to Catholics, the adviser said, "is the vice president."

Catholic church leaders, including the pope, remain vocal abortion opponents. Still, it's not clear that anti-abortion sentiment among Catholic voters — whose support will be particularly critical to Democratic hopes of reversing Trump's 2016 victories in Wisconsin and Pennsylvania — is strong enough to decisively push them toward the president this fall.

A majority of Catholics, or 57%, said abortion should be legal in most or all cases, according to AP VoteCast's survey of voters in the 2018 midterm elections.

In addition, significant restrictions on abortion drew support from 45% of Catholics in a December poll from The Associated Press-NORC Center for Public Affairs Research.

The Trump campaign had touted the scope of its outreach efforts before the coronavirus pandemic upended American life and forced political organizing almost entirely online. The original Catholic voters event was slated for last month in Milwaukee before getting rescheduled as a digital launch, but not before the Archbishop of Milwaukee issued a statement underscoring that his archdiocese and the Catholic Church "are in no way affiliated to or sponsoring this event or campaign locally, statewide, or nationally."