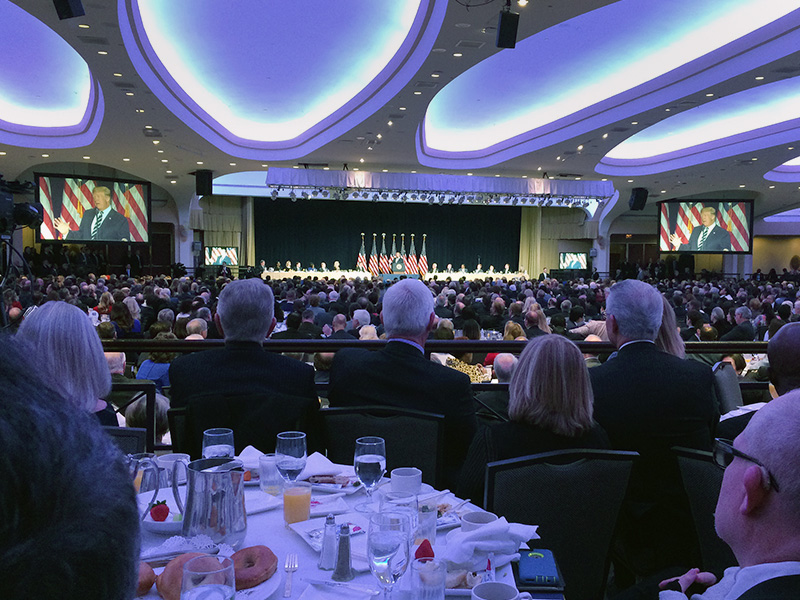 In his second appearance at the annual National Prayer Breakfast, President Trump steered clear of partisan politics and focused on his belief in the country's dependence on God.

"America's a nation of believers and together we are strengthened by the power of prayer," the president said in his 14-minute speech that emphasized connections between religion and government.

The 66th annual event, which drew more than 3,800 people to the Washington Hilton on Thursday (Feb. 8), is a time for prayer, speeches and networking between religious and political leaders from scores of countries. Guests at the breakfast of quiche, bagels and fruit salad included the presidents of Guatemala, Kosovo and Latvia.

Trump cited mentions of God in the Declaration of Independence, the words "In God We Trust" on U.S. currency and the etching of "Praise Be to God" atop the Washington Monument.

"Each year this event reminds us that faith is central to American life and to liberty," he said. "Our rights are not given to us by man. Our rights come from our creator. No matter what, no earthly force can take those rights away."

Trump's speech, which also honored first responders, tireless teachers and hard-working parents, was a shift from his first speech to the annual event last year in which he promised to "totally destroy the Johnson Amendment," a 1954 legislative measure that prohibits tax-exempt houses of worship from involvement in partisan politics.

He also garnered headlines last year for using the prayer breakfast to bash Arnold Schwarzenegger, who took over as host after Trump left the reality show "The Apprentice."

Rep. Steve Scalise, R-La., who spoke after Trump and described the "miracles" of his and others' surviving a June shooting at a congressional baseball practice, expressed his appreciation for Trump's challenge last year. He noted the House passed a measure to repeal the Johnson Amendment. But the Senate later removed it from the final tax bill.

Both Scalise, who declared "You can't separate church from state," and the president emphasized the importance of Americans' right to express religious views.

"We see the power of God's love at work in our souls and the power of God's will to answer all of our prayers," Trump said. "When Americans are able to live by their convictions, to speak openly of their faith and to teach their children what is right, our families thrive, our communities flourish and our nation can achieve anything at all."

At times, the prayer breakfast almost resembled a celebration of faith healing, with an appearance by a military veteran who bounced back from serious injury in a car bomb attack in Iraq, and the president giving a shoutout to a 9-year-old girl who has a disabling illness but whose doctor said she was able to walk again because "this little girl has God on her side."

Held in early February each year, the breakfast is sponsored by the Fellowship Foundation, a secretive Christian organization also known as the International Foundation. It is co-hosted by both Democratic and Republican members of House and Senate weekly prayer groups.

The breakfast also paid tribute to one of its founders, who died last year in late February.

"Our hearts are also saddened by the absence of the co-founder of this wonderful breakfast who passed away last year, Doug Coe, who everybody loved," Trump said in his remarks. "For 60 years Doug devoted his time and passion to this prayer breakfast and to many other wonderful causes."

Coe, the longtime organizer of the breakfast, emphasized the foundation's focus on people-to-people relationships. The breakfast is known not just for its big-ticket main event but the ancillary gatherings that give leaders a chance to meet and talk.

This year, there were a significant number of Russian attendees at a time when congressional leaders have been investigating Russian meddling in the 2016 campaign.

Speaking in the corridor afterward, Konstantin Bendas of the Pentecostal Russian Union of Christians of Evangelical Faith said that a delegation of about 55 Russians attended the breakfast.

"When politicians cannot agree with each other, that's the time when mere humans, mere people, should step in and start negotiating," he said, speaking through an interpreter. "And believing people will kneel in prayer. And I think partially we have managed to do that today."

Other attendees said they appreciated the multi-day opportunity to connect with other people of faith.

"A lot of people focus on just the breakfast," said Donna Rice Hughes, president and CEO of Enough is Enough: Making the Internet Safer for Children and Families. "But it really is about three days of events and people coming together from all over the world and coming together in the spirit of Jesus."