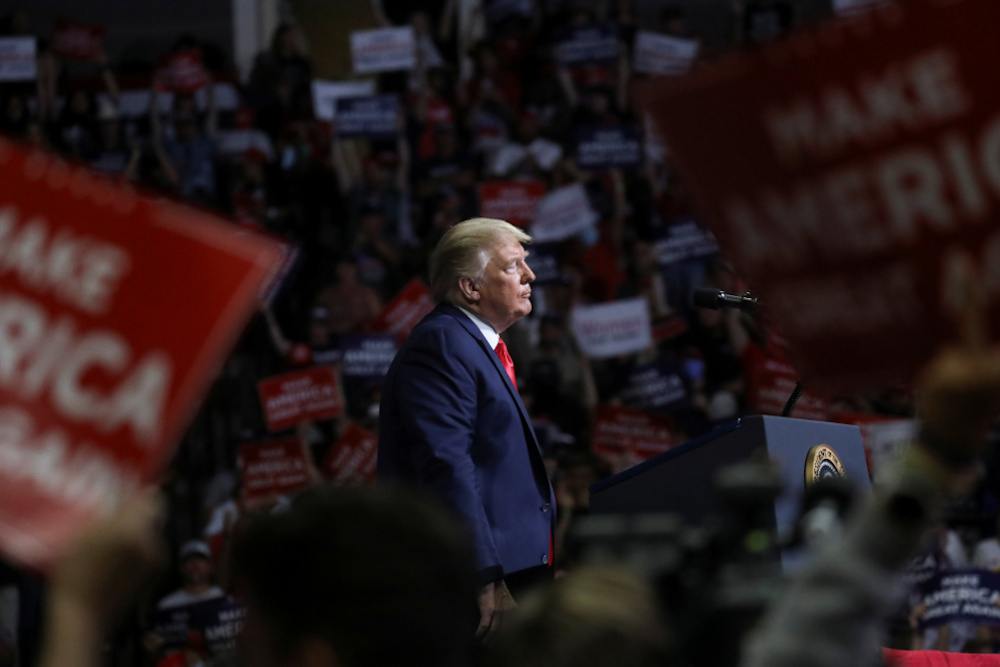 Editor's note: This story has been updated to include the poll's margin of error, which was released after publication.

President Donald Trump is losing support among both white and Hispanic Catholics, according to new data released this week, although if the election were held today, he would likely win the white Catholic vote.

A poll from the Pew Research Center released July 1 showed the president's disapproval rating among white Catholics is at 45%, up from 42% in January of this year. Among Hispanic Catholics, his disapproval figures are even higher — clocking in at 74% in June, compared to 72% in January.

Trump's overall approval among Catholics has dropped from 45% in January to 41% in June. Although his support among white evangelical Protestants remains high, the president has experienced a 6-percentage-point drop from 78% in April to 72% in June among U.S. adults who say they "approve of the way Donald Trump is handling his job as president."

Among white Catholics, the poll found that 57% of respondents said that if the election were held today, they would "vote for/lean toward voting for" Trump. In addition, 47% said that they believe Trump has been a "great" or "good" president, compared to only 20% of Hispanic Catholics. Conversely, only 21% of white Catholics said they believed presumptive Democratic nominee, former Vice President Joe Biden, would be a "great" or "good" president, compared to 39% of Hispanic Catholics.

The margin of error, however, for white Catholics was 4.9% and 8.1 percentage points among Hispanic Catholics, with a total of 931 Catholics polled in total.

The latest findings come just weeks after the president made a number of high-profile, though controversial efforts to reach out to religious voters through photo ops in front of St. John's Episcopal Church and the St. John Paul II National Shrine in Washington, D.C.

His visit to St. John's on June 1 took place after police officers used tear gas to clear away peaceful protesters following the police killing of George Floyd, an unarmed black man in Minneapolis. According to Religion News Service, the police also expelled an Episcopal priest and seminarian from church grounds to make way for the president's photo op.

His visit the following day to the Knights of Columbus-owned National Shrine was blasted by Washington Archbishop Wilton Gregory as "baffling and reprehensible."

"Saint Pope John Paul II was an ardent defender of the rights and dignity of human beings. His legacy bears vivid witness to that truth. He certainly would not condone the use of tear gas and other deterrents to silence, scatter or intimidate them for a photo opportunity in front of a place of worship and peace," Gregory said in a statement.

Earlier this month, a joint poll from Politico and Morning Consult revealed that only 27% of registered voters — and only 23% of Catholics — view Trump to be religious.

"As people of faith across the country, we believe the 2020 election is a referendum on the values that will shape our future," the reflection guide states.

As the presidential election race heats up, both campaigns are expected to continue outreach initiatives to religious voters. Biden is a Catholic and Trump is a Presbyterian.

In 2016, the Catholic vote was narrowly split between Trump and former Secretary of State Hillary Clinton. According to exit polls from the Pew Research Center, the white Catholic vote went overwhelmingly to Trump by 60%, but among Hispanic Catholics, the president only received 26% of the vote. Another analysis by the American National Election Studies, found that Clinton won the overall Catholic vote by 48% to Trump's 45%.