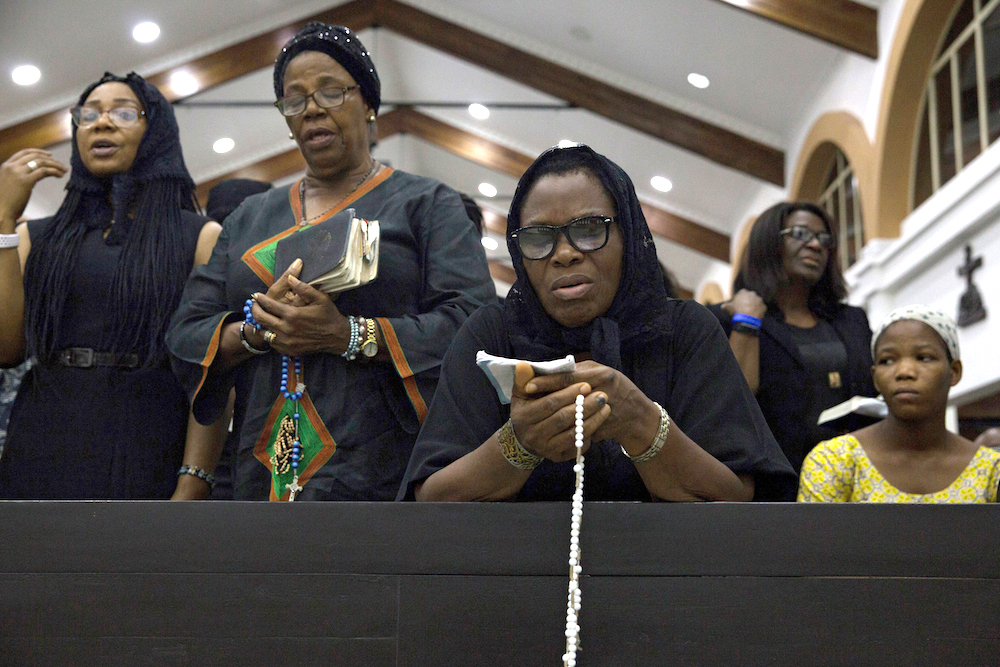 Women pray during Ash Wednesday Mass inside the Church of the Assumption in Lagos, Nigeria, Feb. 26, 2020. (CNS/Reuters/Nyancho NwaNri)

On Jan. 31, the Trump administration announced it would expand a visa ban on six countries: Eritrea, Kyrgyzstan,  Myanmar, Nigeria, Sudan and Tanzania.

The new rule, which started on Feb 21, says citizens of these countries would be blocked from obtaining certain types of visas.

A U.S. official said the new measures were the result of failures by the six countries to meet U.S. security and information-sharing standards.

"These countries, for the most part, want to be helpful, but for a variety of different reasons simply failed to meet those minimum requirements that we laid out," Chad Wolf, acting Homeland Security Secretary, said.

Wolf said non-immigrant visas given to people for temporary stays — visitors, those doing business or people seeking medical treatment — would not be affected by the new rules. And to get off the list, the countries would work with U.S. officials on strengthening their security requirements.

For Nigeria, many reasons have been given for the visa ban. According to the 2018 fiscal year report by the U.S. Department of Homeland Security, about 30,000 Nigerians overstayed their non-immigrant visa, making them the third largest defaulters behind Venezuelans and Brazilians. However, some analysts insist that the ban is a way of reducing the number of Nigerians coming to the U.S.

Nigeria is the largest economy in Africa and with a population of more than 200 million — the highest on the continent, the country has the highest population of migrants in the U.S. among the countries included in the list. In 2018, a total of 7,922 immigrant visas were issued to Nigerians — the second highest among African nations.

The U.S. visa ban for Nigeria is spiraling new developments. Less than a month after the U.S. visa ban, the European Union announced plans to introduce measures that would make it difficult for Nigerian citizens to secure a Schengen Visa, which allows travel throughout 26 European countries, as a result of Nigeria's "non-cooperating government in the return and readmission of citizens staying illegally in Europe."

A new Schengen visa code of the EU Commission took effect on Feb. 2, 2020, that assesses cooperation by non-EU countries on the readmission of irregular migrants. The rule allows the Commission and member states to impose temporary restrictions on certain visas.

"Trump's U.S. visa ban on Nigeria and other countries listed in the ban has been premised on national security concerns," Fr. Emmanuel Ojeifo, a priest of the Abuja Archdiocese, told NCR. "The impression is that Nigeria is not safe, our borders are porous, and that extremists and terrorists may find their way to the U.S. through Nigeria."

Ojeifo, however, wondered why Nigeria would be included on the list since "between 1975 and 2017, no one born in Nigeria has been involved or responsible for a single terror related death on American soil."

He speculated that Trump might have decided to use the visa ban to cut down the number of skilled immigrants coming into the country.

"So it seems that Trump looks at skilled immigrants from Nigeria as threats from an economic security angle. This is the reality: Nigerian immigrants in the USA are well educated and holding important jobs. If Trump does not cut down on immigrant visas, how will he secure jobs for U.S.-born citizens?"

Ojeifo noted that Trump has expressed negative views about Africa, which could have had an impact on this decision.

"One can sense that Trump's policy carries with it his unfriendly posture towards Nigeria and some other countries that he once labelled 'shithole countries,' " he said.

Nigerians have also blamed their own government for its failure to provide jobs for unemployed young people and foster a better environment for small businesses as reasons for citizens leaving the country for opportunities elsewhere. In 2019, Nigeria's unemployment rate rose to 23.1% and underemployment to 16.6%, according to data released by the National Bureau of Statistics.

"It is the failure of leadership and good governance in Nigeria that is responsible for the mass emigration of Nigerian skilled workers to the United States," Ojeifo added. "If our country was better governed, many of these skilled workers would be able to stay at home and contribute to the development of the country instead of looking for greener pastures elsewhere."

Despite condemning the visa ban, Nigerians are hoping it could be a way for turning things around and making the government do more to provide for its citizens.

"One hopes that Trump's visa policy could be a blessing in disguise for Nigeria if it helps us to put our house in order and provide an atmosphere conducive for our own citizens to live, work, grow and enjoy life in Nigeria," Ojeifo said. "We can really do better as a country than what we are currently doing."

A version of this story appeared in the March 20-April 2, 2020 print issue under the headline: Trump's visa ban on Nigeria seen as possible blessing in disguise.