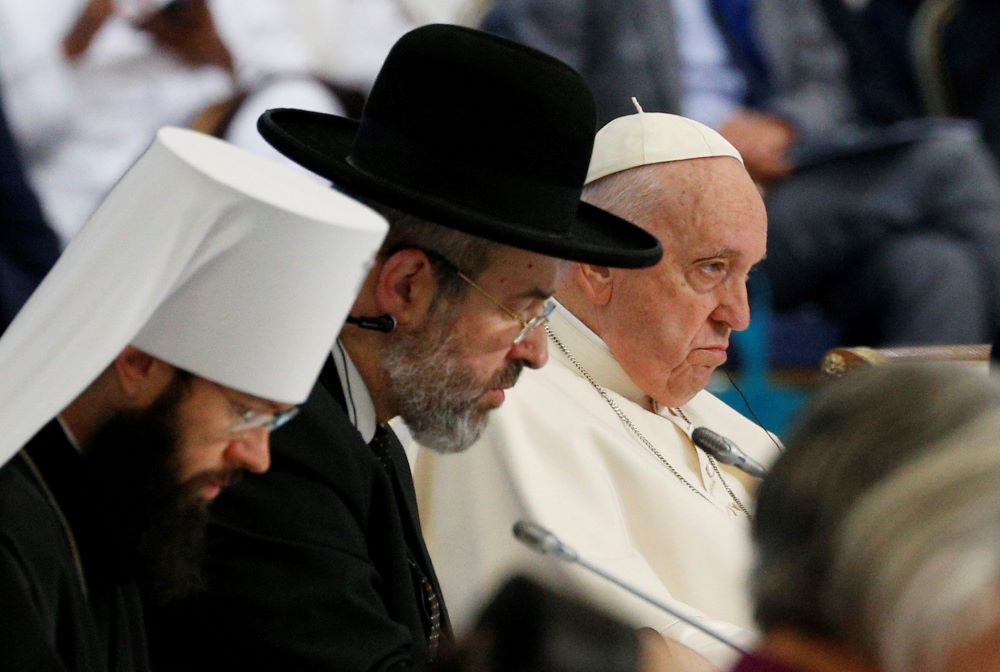 Pope Francis attends the reading of a final declaration during the conclusion of the Congress of Leaders of World and Traditional Religions at the Palace of Peace and Reconciliation in Nur-Sultan, Kazakhstan, Sept. 15. Also pictured are Metropolitan Anthony of Volokolamsk, left, head of external relations for the Russian Orthodox Church, and David Baruch Lau, the Ashkenazi chief rabbi of Israel. (CNS/Paul Haring)

When Pope Francis met senior figures from the Russian Orthodox Church in mid-September, some feared Moscow could exploit the encounter to buttress support for the war in Ukraine.

The encounter, held during the pope's Sept. 13-15 visit to Kazakhstan, coincided with a dramatic counteroffensive by Ukrainian forces. While no one doubts the 85-year-old pontiff's good intentions in seeking dialogue with the Russians, many have urged him to take a tougher stance against President Vladimir Putin's aggression.

"The pope isn't an expert on Ukrainian affairs and must inevitably rely on advisers — and though he's certainly being well informed by some, others are telling him something else," Marcin Przeciszewski, director of Poland's influential Catholic Information Agency, KAI, told NCR.

"Although Vatican diplomacy seeks to avoid taking sides, even-handedness isn't always possible," he said. "It can sometimes be a trap — especially if failing to declare for the persecuted leaves it leaning on the side of the persecutor."

Francis was in the Kazakh capital, Nur-Sultan, for the Congress of Leaders of World and Traditional Religions.

He used his arrival address in the country to deplore the "senseless and tragic war that broke out with the invasion of Ukraine," and urged the world at a Mass for local Catholics to never to "grow accustomed to war, or resigned to its inevitability."

The pontiff planned to hold talks in Kazakhstan with Russian Orthodox Patriarch Kirill, with whom he held an historic first meeting in Cuba in February 2016. But just three weeks before the Congress, the Russian Orthodox Church's foreign relations director announced that Kirill was pulling out.

An encounter between the two needed proper preparation and could not take place "on the sidelines," Metropolitan Antony (Sevryuk) of Volokolamsk told Russia's RIA Novosti agency.

News of the cancellation was met with relief in Ukraine and Eastern Europe.

But Metropolitan Antony had held talks with Francis at the Vatican on Aug. 5; and he met him again in Nur-Sultan, telling the media the pope still hoped to meet Kirill "at another time."

This has stoked fresh misgivings.

"There's no need to declare a severing of contacts, since this would go against the spirit of diplomacy — but there'd be no sense in meeting Patriarch Kirill in the current situation," said Przeciszewski, the KAI director.

"It wouldn't be an authentic dialogue with a sovereign church leader, but with a state functionary totally subservient to Russia's secular power," he said. "Any talks would be artificial and couldn't lead to anything useful." 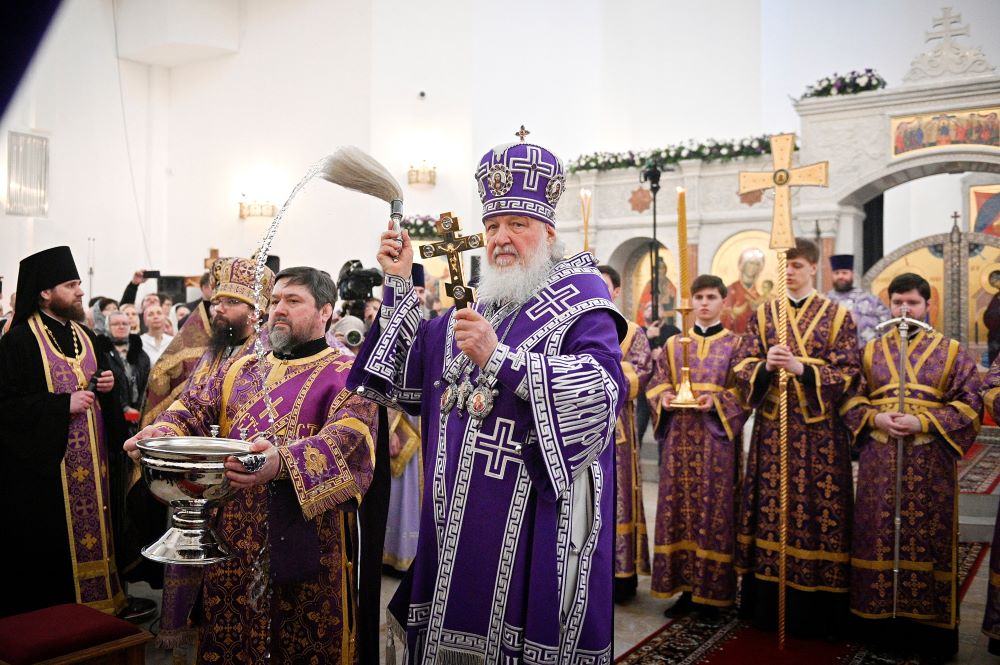 Kirill is known to have been offended by a 20-minute online meeting with Francis in March, when Francis urged him, by the pope's own account, not to act like a "state cleric" or "Putin's altar boy."

The papal jibe had justification.

Since Russia attacked Ukraine with shells and cruise missiles on Feb. 24, Kirill has constantly justified Russia's actions. He is now subject to a travel ban and other sanctions by several Western countries, including Britain and Canada.

In a message to the Kazakhstan Congress, the patriarch deplored, apparently without irony, a lack of "love, mercy and compassion in society," and warned of "attempts to build a world without moral values."

Humanity had "witnessed the distortion of historical facts and unprecedented manipulation of mass consciousness," Kirill told religious leaders. The "path of dictatorship, rivalry and confrontation" chosen by some rulers risked "leading humanity to destruction," he added.

Preaching on Sept. 11, the patriarch again lauded his country for its "worldwide fateful mission," and said its "Supreme Commander, Vladimir Vladimirovitch Putin" could be compared to St. Daniel of Moscow (1261-1303) for resisting those "who dream of crushing Russia."

"If we look at our history, we will understand that our sovereignty was largely determined by the Russian people's strength of spirit, as well as by our Church's spiritual influence on the Fatherland," Kirill told a congregation at Moscow's Danilov Monastery.

The patriarch's militant posture raised misgivings about Francis' attempts to reach out.

Complaints about the pope's view of the war increased after he told an audience in St Peter's Square on Aug. 24 that "many Ukrainian children and Russian children" had been orphaned, and described a Russian far-right political commentator, Darya Dugina, who was killed by a Moscow car bomb, as one of "so many innocents paying for madness, the madness of all sides."

In a rare rebuke, the Vatican's ambassador in Kyiv, Archbishop Visvaldas Kulbokas, was called in by Ukraine's Foreign Minister, Dmytro Kulba, who expressed "deep disappointment" at the pope's "unjust remarks" and insisted his country had had "nothing to do" with Dugina's death.

Meanwhile, the World Congress of Ukrainians said it had urged Francis to support the "public designation of Russia as an aggressor state," and called on him to offer "clear and unambiguous support" for Ukraine's "fight to defend her freedom and independence."

"We are concerned over his public statements regarding Russian aggression, which unjustly equate the aggressor with its victim," the New York-based Congress said in a statement. 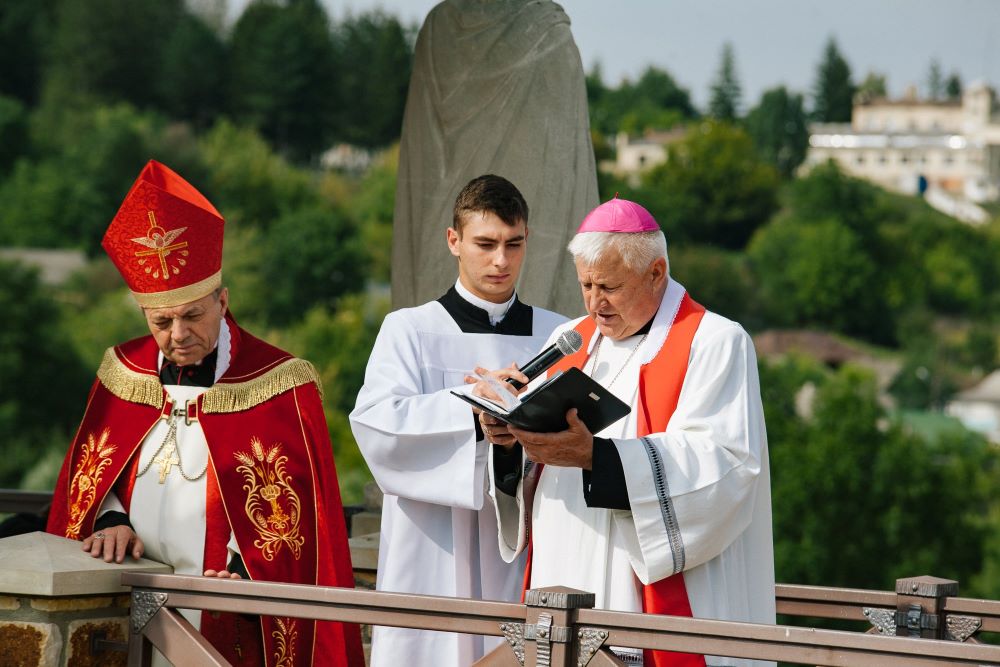 Senior figures have expressed confidence in the pope.

Bishop Jan Sobilo, an auxiliary in Ukraine's eastern Kharkiv-Zaporizhia Diocese, which includes the embattled Donbas region, told NCR he understands the Vatican must "act and work for the good of the whole world" by avoiding a combative stance.

Sobilo said Francis was the only world leader who consistently spoke up for Ukraine when direct hostilities first started in 2014, when Russia forced the annexation of the Crimea peninsula and began supporting separatists pushing for independence from Kyiv.

"The Holy Father is a wise prophet and bridge builder, or pontifex, and he still hopes to find a common language to ensure this war ends with a Russian withdrawal," Sobilo said.

"But it was clearly God's will that his meeting with the patriarch didn't take place, so he could avoid wasting more time listening to Kirill's stupid, idiotic claims," the bishop said. "If the patriarch becomes wiser and more independent of Russia's state rulers, then perhaps he'll request a fresh meeting. But the pope knows the present time isn't appropriate for holding talks."

A Ukrainian evangelical pastor who has met with Francis several times says the pope sought a dialogue with Kirill after being refused talks with Putin and his foreign minister, Sergei Lavrov, but quickly abandoned hopes of influencing the patriarch.

Yevhen Yakushev, originally from Mariupol, told NCR that Francis regretted his controversial remarks about Dugina, and admitted he had "spoken emotionally without careful thought."

Yakushev, who helped dig trenches in an unsuccessful bid to prevent his hometown from Russian capture, said he has had three lengthy meetings with Francis, with a pastor from Buenos Aires. 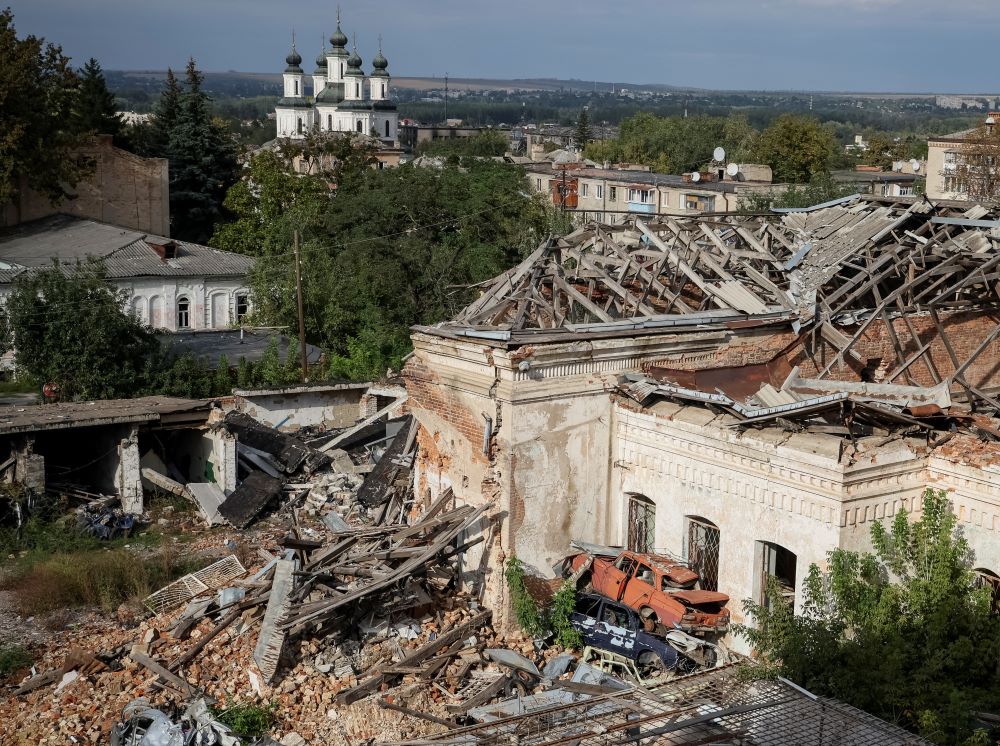 Destroyed houses and cars are seen in Izium, recently liberated by Ukrainian Armed Forces, in the Kharkiv region of Ukraine, Sept. 20. During his visit to Kazakhstan the pope deplored the "senseless and tragic war that broke out with the invasion of Ukraine." (CNS/Reuters/Gleb Garanich)

"Francis is trying to help Ukraine by not closing the door on Russia — when people urge him to denounce Putin as the aggressor, he replies that everyone knows this anyway," Yakushev said.

The pope followed this up in his opening address to the Kazakhstan Congress, insisting on the impossibility of "justifying violence" or allowing "the sacred to be exploited by the profane."

Speaking to journalists on his return flight to Rome, Francis also said Ukraine had a right to defend itself from Russia's invasion, and even appeared to lend support to other countries that are supplying Ukrainians with arms and war material.

Przeciszewski, the Polish KAI director, thinks this should help dispel fears of Russian influence in Rome.

But he advised people around Francis not to harbor hopes of mediation while the war drags on. Przeciszewski suggested instead that Francis visit Ukraine as soon as possible and start a dialogue with Metropolitan Epiphany (Dumenko), the head of the new Orthodox Church of Ukraine, which does not have ties to Moscow and was recognized by Ecumenical Patriarch Bartholomew in 2019.

"For now, any thoughts of peacemaking are simply unrealistic," said Przeciszewski. "It takes two to tango, and … Russia certainly doesn't want Catholic mediation."

Yakushev agrees there's nothing to be gained from talks in the present climate.

"At this stage, while they don't wish to listen and still adamantly believe they're doing the right thing, there's no sense in speaking to them," he said.

Ukrainian church leaders have welcomed the latest counteroffensive against invading forces, which has raised the real possibility of a Russian pullback, and even of a Russian defeat.

By mid-September, Ukrainian tanks and armored vehicles, marked with white crosses, were reported to have recaptured over 3,000 square miles of territory around the northeastern city of Kharkiv, as well as areas close to the southern port of Kherson.

Laying the foundation stone for a new Orthodox cathedral at Ternopil, Metropolitan Epiphany said Christians were "rejoicing" at the latest military successes, and praying God "will help overcome evil, and lead us all to victory and a just peace."

Meanwhile, the head of Ukraine's Greek Catholic Church, which combines the eastern rite with loyalty to Rome, welcomed Cardinal Konrad Krajewski, prefect of the Vatican's charity dicastery, on his fourth visit to Ukraine as a papal envoy, and thanked Western Catholics for their continuing prayers.