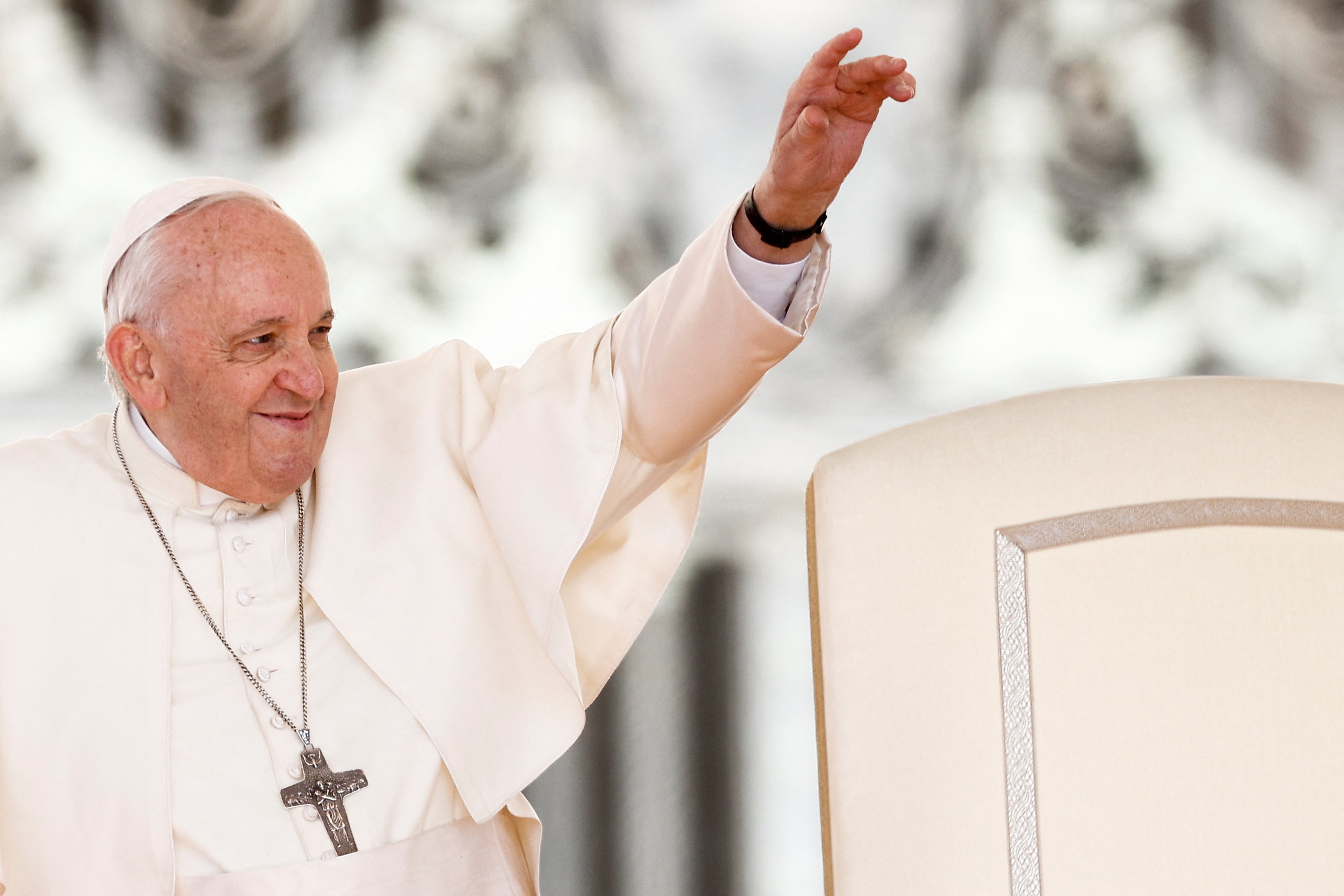 Pope Francis greets the crowd during his general audience in St. Peter's Square at the Vatican April 27. (CNS)

Pope Francis said he has asked for a meeting in Moscow to help bring about an end to the war and warned that Russian Orthodox Patriarch Kirill, a key backer of President Vladimir Putin's fight against Ukraine, should not become Putin's "altar boy."

The pope's remarks came in an interview published on May 3 in the Italian daily Corriere della Sera.

In it, the pope revealed that 20 days after the war began, he asked the Vatican's top diplomat, Italian Cardinal Pietro Parolin, to communicate with Russia that Francis was ready to travel there in an effort to bring about an end to the conflict, which he likened to what took place in Rwanda 25 years ago. Although the pope did not use the word, the Vatican has recognized the 1994 violence by the Hutus against the Tutsis, which left more than 800,000 people dead, as a genocide.

"We have not yet had an answer and we are still insisting," the pope said of his request to meet with the Russian leader.

Francis has spoken with Ukraine President Volodymyr Zelensky twice since the outbreak of the war and, in a break with diplomatic protocol, left the Vatican on Feb. 25, the day after the war began, to travel to Russia's embassy to the Holy See to register his concerns against the conflict.

In the interview, Francis again reiterated that a trip to Ukraine's capital of Kyiv was not on table at the moment, saying a trip to Russia to stop the war was the first priority.

The pope also offered further details on his March 16 video conference with the Russian patriarch, saying that during their 40 minute discussion, "I told him: we are not state clerics."

Francis said that Kirill spent the first 20 minutes of the virtual meeting outlining Russia's justifications for the war.

"I listened to him and told him, I don't understand anything about this," Francis said in the interview.

"The patriarch cannot transform himself into Putin's altar boy," the pope said.

The two religious leaders had planned to meet on June 14 in Jerusalem — marking only the second ever in person meeting between a pope and the Russian patriarch —  but in an April 21 interview with the Argentine daily La Nacion, the pope said that the Vatican concluded that a meeting at this time would cause more "confusion."

During the May 3 interview, the pope went on to reflect on the roots of the war, saying that "the barking of NATO at the gates of Russia" likely motivated Putin's aggression against Ukraine.

Francis also recalled his April 21 meeting with Hungarian Prime Minister Viktor Orban at the Vatican and said the Hungarian leader told him that Putin had a plan to end the war by May 9.

"I hope that is the case, so we would also understand the escalation of these days," Francis commented. "Because now it's not just the Donbass, it's Crimea, it's Odessa, it's taking away the Black Sea port from Ukraine."

"I am pessimistic but we must do everything possible to stop the war," Francis said.

Francis, who has been suffering from a torn ligament in his right knee that has impaired his ability to walk, also revealed that he was planning to have a small knee operation via an infiltration (or injection) on May 3.

To date, that Vatican has yet to comment on the plans for the procedure.