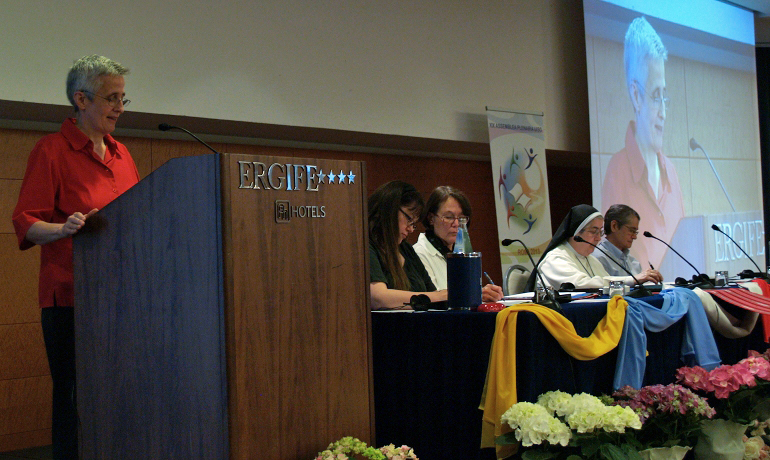 Congregation of Jesus Sr. Martha Zechmeister, at left, speaks at the UISG assembly in Rome May 7. (NCR photo/Robyn J. Haas)

Addressing the role of authority in religious life at a gathering of global women religious leaders here, Congregation of Jesus Sr. Martha Zechmeister told the women they owe ultimate obedience only to God.

"Religious obedience ultimately can only respond to God's authority," she said. "In the traditional language, fulfilling the will of God is the only legitimate reason for religious obedience."

Zechmeister, an Austrian, is professor of systematic theology at the University of Central America in San Salvador. She spoke before a gathering of some 800 women who have gathered here under the aegis of the International Union of Superiors General.

She said those who obey God's will are "truly free" and are "a threat to the powerful."

"Aware that they are unconditionally dedicated to the supreme authority, they are free from all kinds of servility. Even risking their own lives, they have the courage to face any situation: they are free to examine in depth and to walk in the footsteps of Jesus," she said, adding the "decisive question is, then, how do we find the will of God in the daily reality of our lives without deceiving ourselves."

The will of God, she said, answering her own question, can be found in the "the authority of the suffering."

In discovering and following this authority, she said religious women "will go towards a life, "which is both authentic and fruitful. … And our most vulnerable brothers and sisters will become our true masters and guides to the mystery of God."

The focus of religious life, Zechmeister insisted throughout her talk, is maintaining an ultimate obedience to God by being responsive to the needs of the poor.

Speaking to the group of heads of international religious orders, she said that with authority one must protect the helpless from exploiters both within and outside the community, "without falling into the trap of paternalism or maternalism."

She warned against authoritarian systems, saying they are maintained by "oppressed people who seek to feel powerful." She added that this condition has been one of the roots of sexual abuse committed by priests and religious.

"People with real authority do not bother trying to preserve their own power, but, on the contrary, are driven by the desire that other people grow in self-determination or autonomy and freedom of action. True authority grows to the extent that it causes others to grow."

Meanwhile, women religious leaders, she said, need to avoid a "one size fits all" response to religious life. She asked the women, "Is there not still a dominant concern that people 'fit' or comply rather than being willing to accompany each fascinating adventure of encounter with one's mystery and of self-development or self-realization to the full? Is there not a predominant fear of those who diverge from the norm?"

A particularly sad variant of this attitude, she said, has long been found in the way religious have treated the African and Latin American indigenous. "In the name of religious formation their cultural models were destroyed and subjected to a violent 'Europeanization'."

"In truth, have the arrogance of Euro-centrism and its mania of superiority been overcome? Have we Europeans really given up the 'sovereignty of interpretation' in what is and what should be the religious life? Can we accept and respect with a serene spirit the process of 'de-Europeanization' and the richness of cultural diversity: a diversity of approaches to living in community, to achieving mission and to expressing our relationship with God?"

She said that answering these questions are necessary "because they affect the way human relationships are lived in congregations."

"In the end, a community structured along lines of control and uniformity is of no use to its evangelical mission. The only model of community which can engage us is the movement of Jesus: simple, fraternal and with great human warmth such as will welcome and share life with all those excluded from the banquet of the rich and powerful."

Looking outside religious life at the world, the same obedience to the will of God, found in the example of Jesus, applies, she said, contrasting the way of Lucifer and the way of Christ.

"Lucifer teaches his demons subtle tactics of seduction. He commands them to awaken in their followers, first of all, a greed for riches, then to push them to the desire of vain honor and an immense pride. His cunning trick consists in seducing with the false promise that those who submit to his rule will increase in power and prestige. But, in truth, this dynamic leads to a system of dependency, which destroys self-determination and subjugates in a brutal fashion.

"We see this in the arms industry, stock markets and rating agencies with their bombastic liturgies and symbols of power, condemning countless human beings to misery. Just like the demons, individuals who act, moneylenders and lobbyists, are faceless: they remain hidden behind a deceptive facade, behind 'the smoke and fire.'"

By contrast, she said, the call of Christ to poverty and humility is an invitation to reverse course of the logic of the world in a radical way.

She cited the late Jesuit Fr. Ignacio Ellacuría, who in a speech in Barcelona ten days before his assassination in 1989 said: "Only with utopia and hope you can believe and have the courage to attempt to change history, to subvert it and throw it in another direction, alongside all the poor and oppressed of the world."

She told the women that what the church needs most are leaders not for the thirst for power, but for "a passion for life and a passion for the victims of power, which is passion for God himself."

Early Christians understood this, she continued. They died, victims to external powers. But as the church grew in time and its own power it lost this understanding of authority and obedience building false authority systems.

By the fourth century, she said, the community of Christians ceased to be a church of martyrdom, following Jesus and became "more and more part of the world that produces victims, or at least tolerates their being treated as 'collateral damage.'"

"This symbiosis between political and ecclesiastical power involves a serious danger that the church betrays its essence, its mission, loses its authority, which has its only foundation in Jesus and the Gospel. And in so doing becomes a powerful institution that defends, first of all, its own interests. However, from its beginnings as a community of Jesus, the church has only one right to exist: to make present -- with the authority of Jesus -- the Gospel as a saving and liberating reality in situations that afflict and enslave, in a concrete manner, human beings in this world."