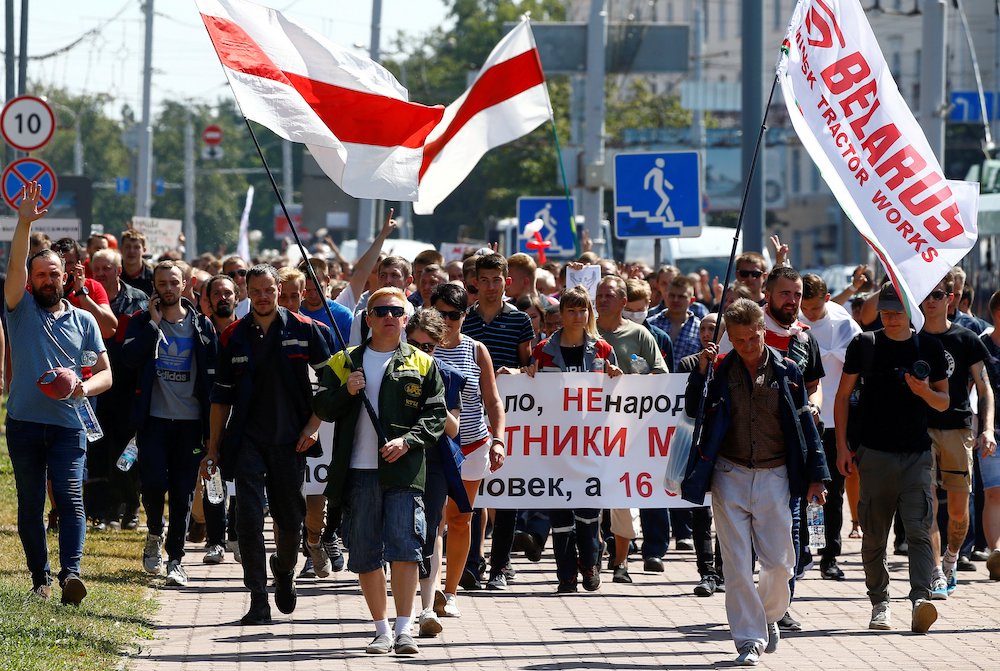 When the head of Belarus's Catholic Church was barred from reentering his country on Aug. 31, amid mass protests over a dubious election, the extraordinary move provoked outrage.

More than a week on, as prayers and Masses take place across the former Soviet republic, the church still waits to hear if and when the 74-year-old Archbishop Tadeusz Kondrusiewicz will be allowed back to his flock.

"The border guards just told him politely but firmly he didn't have permission to enter Belarusian territory," Kaciaryna Laurynenka, a Catholic historian and media worker from Vitebsk, explained to NCR.

"Other bishops are talking of persecution, and this seems absolutely right," said Laurynenka. "But Catholics have a significant presence here, so we'll have to see what happens. There are already reports the archbishop's treatment is being opposed within ruling circles."

Kondrusiewicz was turned away without warning at Kuznica, on the western border with Poland, a day after he released a pastoral letter warning a possible slide toward civil war. In a message to Catholics on a church-run news site, the archbishop said the move was "completely incomprehensible" and violated the country's 2009 citizenship law.

Meanwhile, the border ruling was deplored by Belarus' bishops' conference, which warned that Kondrusiewicz's exclusion would not "serve in relieving tensions" and called on Catholics to "pray diligently" for his swift return.

"Our metropolitan didn't make political statements — he only called for honesty, responsibility, an end to violence and [for] dialogue," Kasabutsky added in a website interview.

"It's obvious they're trying to pressure the church, which indeed means the church is being persecuted," said the prelate. "Although no one says this openly, nor did they when persecution was severe during the Soviet era. The facts show the situation is now similar."

The Swiss-based Council of European Bishops Conferences, or CCEE, has demanded his "immediate return home," while U.S. Secretary of State Mike Pompeo backed the constitutional right of Belarusians "to enjoy their basic freedoms without hindrance, including freedom of religion," in a Sept. 1 tweet.

The archbishop's exclusion was defended, however, by Belarus's embattled president, Alexander Lukashenko, whose sixth election victory on Aug. 9 was rejected by opponents, sparking weeks of mass protests.

Belarus was proud of being multi-religious, Lukashenko insisted to journalists on Sept. 2, while his government had no intention of attacking the faith.

But Kondrusiewicz had "taken to politics," and gone to Poland to "receive instructions," the president alleged. Lukashenko also alleged that the archbishop may hold dual citizenship, illegal in Belarus, and would thus be barred from entering both Belarus and Russia.

For Catholics like Laurynenka, the archbishop's exclusion has been the latest shock in a turbulent summer, which has raised questions about the fate of a country widely seen as Europe's last dictatorship.

"Our church has been allowed to function here — on condition it remains silent and never raises its voice on contemporary issues," said Laurynenko.

"This seems to be why Archbishop Kondrusieiwcz's reactions to the current situation caused such offense to the rulers," she said. "It was always assumed any mention of Catholic social teaching would be perceived as over-political. But we can now see that talking about justice and human rights is both natural and necessary."

With four dioceses and some 500 parishes, the Catholic Church includes around 6% of the 9.4 million inhabitants of Belarus, and is recognized as a "traditional faith" in state law, which also enshrines the "determining role" of Orthodox Christianity.

The Catholic Church was tightly restricted during seven decades of communist rule, gaining its first bishop in 1989 in Kondrusiewicz, who returned as archbishop and bishops' conference president in 2007 after 16 years as apostolic administrator in Moscow. 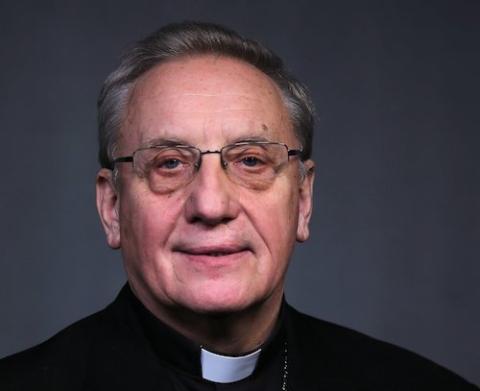 After gaining power in 1994, Lukashenko sought ties with the Vatican, negotiating a concordat and offering, most recently during his second Rome visit in May 2016, to host talks between Pope Francis and Moscow Patriarch Kirill of the Russian Orthodox Church.

But the president faced Western sanctions and a travel ban for vote-rigging and autocratic behavior. Meanwhile, complaints of discrimination surfaced in the Catholic Church, which has relied heavily for its post-Soviet recovery on foreign clergy, especially from Poland.

Permits for visiting priests have frequently been refused or shortened for priests' alleged failure to speak Belarusian or Russian, the two official languages.

This March, he again accused the government of "using legal pretexts" to bar visiting clergy, when declining admissions to the church's seminaries at Hrodna and Pinsk were limiting its pastoral outreach.

Such problems were overshadowed by the Aug. 9 election, when Belarus' State Electoral Commission again awarded victory to Lukashenko this time with 80.1% of votes against the 10.1% of his nearest challenger, Svetlana Tikhanovskaya, a 37-year-old teacher.

Tikhanovskaya rejected the result and fled to neighboring Lithuania, where she set up an opposition Co-ordinating Council to supervise demands for a fresh ballot.

Then street protests erupted, which were brutally dispersed, leaving thousands injured and arrested.

The independent Belsat TV, based in neighboring Poland, said security forces, backed by troops and tanks, had used tear-gas, rubber bullets and stun grenades on the day the results were announced.

The BBC reported cries for help as protesters were thrown in police vans, amid eyewitness accounts of prison torture and disappearances.

Although the repression was eased in face of international criticism, it was later stepped up again, with the Interior Ministry confirming at least 140 arrests around Minsk's Independence Square on Aug. 30.

With reports continuing of overcrowded jail cells, forced confessions, beatings and threats of rape, there are warnings that Lukashenko and other officials could face charges of crimes against humanity by the International Criminal Court.

Western governments have reacted cautiously. Lukashenko, who turned 66 Aug. 30, has accused NATO and the European Union of stoking the protests to gain control of his country; and there are fears his forced removal could provide a pretext for Russian intervention.

The Belarusian Orthodox Church has also been cautious. Its Russian leader, Metropolitan Pavel Ponomarev, sent glowing greetings to Lukashenko on his declared victory, saying Belarusians placed "great hopes" in him "to protect the sovereignty of Belarus, while preserving the nation's spiritual and cultural heritage."

On Aug. 25, Pavel was replaced by an ethnic Belarusian, Bishop Veniamin of Borisov, who appealed in his first public message for "a change of hearts from evil to good, from lies to truth, from division to unity, from condemnation to understanding."

Yet the Orthodox Church remains subject to Russia's Moscow Patriarchate, making its leaders unlikely to speak out.

Kirill also sent "heartfelt congratulations" to Lukashenko, as his forces beat and harassed opponents in Minsk and other towns, wishing him "blessed success" in maintaining "fruitful interaction" with Orthodox Christians, and praising his commitment to the "enduring ideals of mercy, peace, goodness and justice in society."

By contrast, Belarus's Catholic Church reacted quickly to the repression.

"Our homeland faces a difficult time, sadly overshadowed by bloodshed on our streets," Kondrusiewicz told state officials in an Aug. 14 message, before lodging an official protest.

"The beating of peaceful demonstrators who want to know the truth, their cruel treatment and inhumane detention, is a grave sin on the conscience of those who give criminal orders and commit violence," said the archbishop.

Two days later, as 200,000 demonstrated in Minsk, a pastoral letter from the bishops' conference deplored the victimization of "peaceful and innocent people of all ages," and called for "an end to unnecessary aggression, and for dialogue for humanity and society."

Catholics have been heartened that Orthodox laity and ordinary clergy have also come out against the regime's use of violence, despite a warning by their church's governing synod not to join the protests.

Such public stances have required courage.

On Aug. 24, Lukashenko warned clergy of all denominations to stay out of politics and avoid "following the lead of renegades," cautioning that his state would not "look on indifferently."

But Western church organizations have also reacted, including the Brussels-based Conference of European Justice and Peace Commissions, which condemned the "disproportionate violence," supporting calls for European Union sanctions and arranging for Christians across the continent to recite the Lord's Prayer for "truth, justice and peace."

None of this can immediately the solve the problems facing Belarus's Catholic Church.

Several prominent priests have been detained, including a Greek Catholic parish rector in Brest, Fr. Igor Kondratiev, who was called in by prosecutors after demanding the release of arrested protesters. 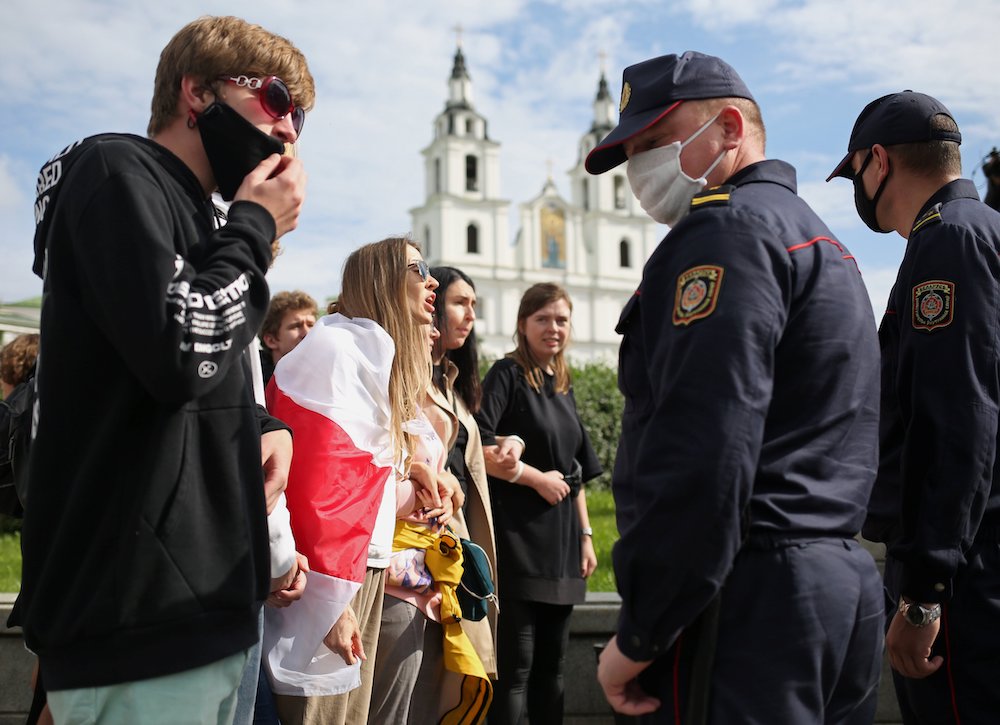 Students stand in front of law enforcement officers during a protest against presidential election results in Minsk, Belarus, Sept. 1. (CNS/Reuters/Tut.By)

In Minsk, the church of Sts. Simon and Helena, close to government headquarters on Independence Square, was said by its rector, Fr. Vladislav Zavalniuk, to have had its locks changed by overnight assailants on Sept. 1, a week after police blocked access and arrested protesters seeking shelter in the building.

In his interview the same day, Kasabutsky, the Minsk-Mohilev auxiliary bishop, said the Catholic Church had not been invited to a session of Belarus's Inter-Faith Advisory Council. He said the group had thus been "smeared with mud" by state officials.

Laurynenka, the Catholic historian, says she still expects Lukashenko to resign, and hopes this will happen without serious bloodshed.

Belarusians aren't talking about realigning their country with NATO or the European Union, she points out, and have been careful to avoid provoking Russia through an East-West showdown paralleling neighboring Ukraine's in 2013-2014.

In the end, given their country's delicate geopolitical position, most Belarusians simply want a better life, greater freedom and a stable democracy, Laurynenka says. As for Catholics, their immediate hope is to get their archbishop back.

"Catholics have always have trouble here, whether at work or in education, because of their religious identity," said Laurynenka.

"But they're not afraid, and they'll go on making their views known, even as the rulers refuse to back down," she said. "What's most important, when many risk losing jobs and livelihoods because of these protests, is to know we're not alone, but have the support of fellow Catholics abroad."