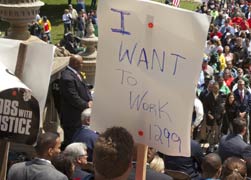 Union members march and rally for jobs in Lansing, Mich., in 209. When Pope Benedict XVI released his third encyclical lasat year, "Caritas in Veritate" ("Charity in Truth"), he stressed that the voice of workers must be heard along with heads of state and industry moguls. (CNS/Jim West)

WASHINGTON -- A group of Catholic scholars contends that management efforts to break labor unions are a grave breach of the church's social doctrine and tantamount to committing mortal sin.

A statement from Weymouth, Mass.-based Catholic Scholars for Worker Justice, released May 1, the feast of St. Joseph the Worker, offers a detailed argument that actions to thwart union organizing campaigns, stifle contract talks, unilaterally roll back wages and benefits, and break existing labor agreements are a "grave violation of Catholic social doctrine on labor unions."

"This violation of Catholic doctrine constitutes material grounds for mortal sin because it stands in grave violation of both the letter and spirit of Catholic social doctrine," said the document, titled "Union Busting Is a Mortal Sin."

In laying out their argument, the scholars said efforts to deny workers the right to organize violate the First, Fifth and Seventh commandments regarding idolatry, scandal and theft, respectively.

Joseph Fahey, professor of religious studies at Manhattan College in New York City and chairman of the scholars group, told Catholic News Service May 14 that the statement analyzes the criteria for mortal sin much like a priest would during the sacrament of reconciliation.

"We said, 'What commandments does [breaking a union] violate? What specific matters of Catholic teaching does it go against? Is it a grave matter? If it is, is there an objective case for mortal sin?" Fahey explained.

"We do make a case that if you work to violate Catholic teaching to the extent that you violate a worker's right to free assembly, you are involved in the grave matter of mortal sin," he said.

The statement, posted on www.catholicscholarsforworkerjustice.org, was signed by 13 scholars, clergy and women religious. Additional signers were being sought, Fahey said.

Founded in 2008, Catholic Scholars for Worker Justice works to develop Catholic teaching on worker rights and to support workers. It has 250 members around the world, according to Fahey.

The statement arose out of a concern that the scholars have had regarding anti-union efforts they say have been carried out by some Catholic dioceses and organizations in recent years.

"There are many Catholic institutions that live up to Catholic teachings," Fahey said. "But there are some, either by ignorance or by design, that ignore Catholic teaching and we as scholars feel we have a role to play by pointing that out."

The statement said Catholic social doctrine is "forthright and unambiguous" in regard to labor unions. "It states boldly that they are essential to the universal common good," the document said, citing the Compendium of the Social Doctrine of the Church.

"The church's support for labor unions is rooted in the philosophical principle of freedom of association and the moral principle of a just or living wage," it continued, explaining that Catholic teaching has long held that workers have "the natural right of free assembly."

The scholars explained that under church teaching, such a right is rooted in divine law and that efforts to break a labor organization using civil laws is comparable to idol worship, which is contrary to the First Commandment.

"Since the right to form labor unions is rooted in divine law, no created law may be invoked to deny, or frustrate, or impede that right," the document said.

"This is even more the case with sponsors and managers of Catholic institutions who ignore or deny Catholic social teaching on unions by hiring 'union avoidance firms' to prevent or 'bust' unions," the document said. "When an employer or manager, all the more with a Catholic employer or manager, engages in such scandal by publicly and systematically denying the official magisterial teaching of Catholic social doctrine on labor unions, that person has committed the grave matter of a mortal sin."

The action of breaking labor unions also amounts to "wage theft" as well as "the theft of the human right of free association," according to the scholars. Both violate the Seventh Commandment, they said.

Other violations of the Seventh Commandment cited in the statement include what the scholars described as "stealing" institutional funds to hire firms that specialize in anti-labor activities and "stealing" public tax funds to employ civil laws and government agencies to "unjustly delay, prevent or to 'bust' unions."

The scholars concluded their document by suggesting that Catholic employers, managers and sponsors who fear they may be violating Catholic social teaching consult with their confessor.