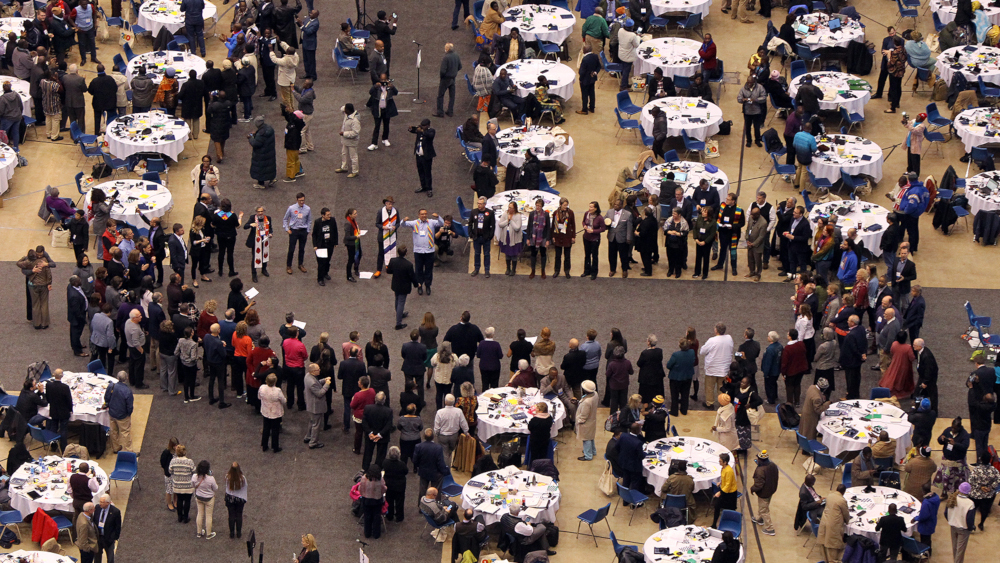 United Methodist delegates who advocated for LGBTQ inclusiveness gather to protest the adoption of the Traditional Plan on Feb. 26, 2019, during the special session of the UMC General Conference in St. Louis. (RNS/Kit Doyle)

The United Methodist Church’s top court has upheld much of the Traditional Plan approved earlier this year, continuing the global denomination’s ban on the ordination and marriage of its LGBTQ members.

Approved by delegates to a special session of the United Methodist Church’s General Conference in February, the Traditional Plan strengthens language in the denomination’s Book of Discipline that bars LGBTQ clergy and forbids same-sex marriage.

That rulebook currently states that "the practice of homosexuality is incompatible with Christian teaching" and that "self-avowed practicing homosexuals" cannot be ordained as ministers, appointed to serve or be married in the church.

The plan also bars bishops from consecrating, ordaining or commissioning "self-avowed practicing homosexuals" even if they have been elected or approved by the appropriate church body. It prohibits those church bodies from approving or recommending them as candidates, as well.

And it strengthens current complaint procedures and penalties in the Book of Discipline. A clergy member who performs a same-sex wedding will face a minimum one-year suspension without pay for the first offense and a loss of credentials for the second.

The new rules will take effect in January 2020.

The Judicial Council reviewed the Traditional Plan during its spring meeting, which ran Tuesday April 23 to Friday in Evanston, Ill.

The court ruled seven of the 17 petitions that made up the Traditional Plan — including four amended during the special session — were unconstitutional and will not be added with the others to the Book of Discipline.

In a statement thanking the Judicial Council for its review, Bishop Ken Carter, the president of the denomination’s Council of Bishops, noted additional questions about those rules may arise before the end of the year.

Meanwhile, Carter said, "The Judicial Council’s decisions are clear and sound, and they give helpful guidance to the Church."

This is the third time the Judicial Council has ruled on the constitutionality of the petitions that made up the Traditional Plan.

Delegates to the special session had passed a motion made by the Rev. Timothy Bruster requesting a "declaratory decision" by the court on the "constitutionality, meaning, application and effect" of the Traditional Plan.

Bruster is a delegate from the Central Texas Conference and the first clergy alternate for Judicial Council, though he recused himself from the spring meeting.

In a brief to the court, Bruster argued that the plan should be considered as a whole, pointing to a previous case where the Judicial Council rejected an entire plan to reorganize the UMC because parts of the plan were unconstitutional.

But the Judicial Council ruled on each petition in the Traditional Plan separately and largely upheld its earlier decisions, ruling only on the constitutionality of the petitions.

The Judicial Council did limit implementation of the entire Traditional Plan.

A petition that would have allowed the denomination’s Board of Ministry to investigate whether or not a candidate for ordination is "a practicing homosexual," including a review of a candidate’s social media posts, was ruled unconstitutional.

So was a petition that would have required candidates to certify to a bishop their willingness to comply with the Book of Discipline in its entirety, "including but not limited to” all ordination requirements. The court ruled that such an “open-ended and unconstitutionally vague certification requirement" violated the principle of legality, which ensures "all individuals and entities are equally bound by Church law."

In a separate ruling Friday, the Judicial Council upheld an “exit plan” that allows churches to leave the denomination with their property over decisions made at the special session.

February’s special session was called after the last quadrennial General Conference meeting in 2016 to consider several plans to move the United Methodist Church forward despite its divisions.

But the plan approved by the General Conference and the rulings Friday by the Judicial Council are unlikely to end debates over the inclusion of LGBTQ United Methodists in the denomination, which date back to the 1970s, when language about sexuality was added to the Book of Discipline.

Some opponents of the Traditional Plan already had indicated they don’t plan to follow the new rules, and United Methodists on all sides have said they are open to the possibility of launching a new Methodist movement.

In response to the court’s decision, Reconciling Ministries Network, a movement advocating for the full inclusion of LGBTQ United Methodists in the church, released a statement that read in part: "The outcome is not surprising and does not change our plan to continue to resist the decisions of GC2019; continue to live into Biblical Obedience; show up at General Conference 2020; and remain open to new possibilities for our Church."

Meanwhile, supporters of the Traditional Plan were pleased by the decision.

Mark Tooley, president of the conservative IRD, said in an email to Religion News Service that it "confirms that United Methodism will continue to globalize and move in a more traditionalist and orthodox direction."

"This ruling should also alert adamant dissenters that the church’s teaching on marriage will not change and that the time has come for creating new more liberal denominations that will accommodate their views. Traditionalists are willing to assist in this process on generous terms," Tooley said.

"Confident in the power of prayer and believing that God has answered our prayer by the decisions of the Judicial Council today. We give God all the glory," Kulah said.

The General Conference will meet again next year in Minneapolis.

In her concurrence, Judicial Council member Beth Capen noted, "Presumably these matters will end up before the Council again in one form or another.

"Hopefully, General Conference will be proactive in reconciling these problems."