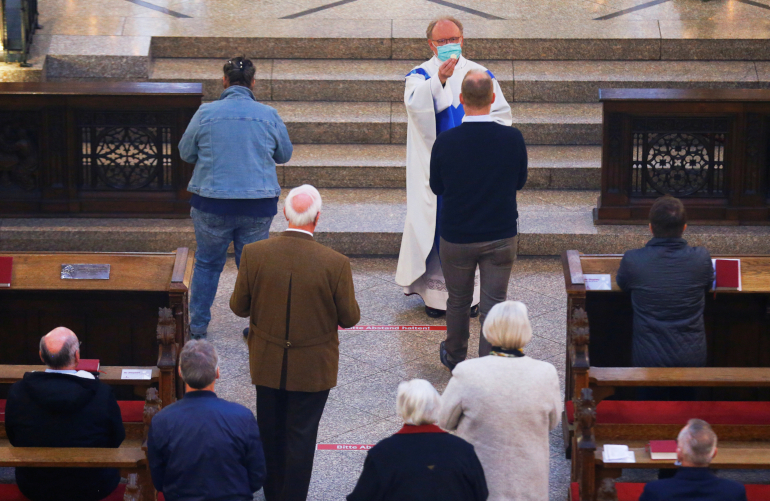 A priest wearing a protective face mask gives holy Communion to a man May 1, 2020, in a Catholic church in Kevelaer, Germany, during the first public Mass in the city since churches were closed because of the coronavirus pandemic. (CNS photo/Thilo Schmuelgen, Reuters)

The U.S. bishops' conference has forwarded a set of recommendations to Catholic prelates across the country, proposing various paths forward for how they might restart the public celebration of the Mass in their dioceses despite the continued fear of the spread of the coronavirus.

In an April 30 memorandum obtained by NCR, Archbishop Leonard Blair, head of the bishops' Committee on Divine Worship, suggests the prelates consider a series of guidelines prepared by the Thomistic Institute at the Dominican House of Studies in Washington.

Taking their cue from the Trump administration's "Opening Up America Again" plan, which says the country will return to normalcy in three phases, the guidelines offer possibilities for celebrations of the Mass first in gatherings of 10 people, then 50 and then on a more regular, unlimited basis.

Among the recommendations for the first phase: limiting access to the Mass via either a first-come, first-served system or on a rotational basis, asking congregants (but not presiders) to wear masks, and using hand sanitizer during distribution of Communion, which, they suggest, may still be received on the tongue.

Blair, who also leads the archdiocese of Hartford, Connecticut., says in his memo that he is providing the recommendations to the country's prelates so that "if bishops decide to proceed in a particular manner, then the guidelines specify the medical precautions that can and need to be taken."

"Determining local solutions will require prudential judgment, as well as respect for sound liturgical practice and above all respect for the matter and form of the sacraments," he states. "We can also anticipate that people will disagree on some points."

Addressing the first phase in the Trump administration's plan, the guidelines suggest that bishops could allow for public celebration of the Mass with "greater frequency" for groups of 10 people or fewer, while still encouraging those in populations with special risk to the coronavirus to stay home.

They recommend that parishes use tape to mark where people should sit to maintain six feet of distance between one another, and that choirs not be used, "as vigorous singing, especially in close proximity to others, may increase the risk of viral spread."

Although they ask participants in the Mass to wear masks, they discourage the priest celebrant and other ministers from doing so, instead suggesting that they keep 6 feet of distance from one another at all times.

"The Mass is imbued with powerful sacramental and liturgical symbolism," they say. "Wearing a mask and gloves would be a detrimental counter-sign in this context, and it is not warranted by considerations of hygiene if the priest remains a proper distance from the congregation."

Turning to the issue of Communion, the guidelines suggest that the distribution of the Eucharist be moved to take place at the end of the Mass. They propose that a table be set up at each communion station with a bottle of hand sanitizer.

Mass participants are then to come forward, removing their masks to receive Communion.

"Holy Communion may not be distributed with gloves, nor may it be received in the hand if a member of the faithful is wearing gloves," say the guidelines.

"Hand hygiene is effective against the virus," they state. "In these circumstances, gloves are not needed if the priest performs hand hygiene."

Addressing the question of whether Communion should be taken in the hand or on the tongue, the guidelines state: "We believe that, with the precautions listed here, it is possible to distribute on the tongue without unreasonable risk."

The Thomistic Institute's guidelines, which are available online, were authored by a working group that includes two medical doctors: Timothy Flanagan, an infectious disease specialist at Brown University's Alpert Medical School and Thomas McGovern, a specialist in micrographic surgery in Indiana.

The group also includes four Dominicans -- one biology professor and three theologians -- and Fr. Paul Scalia, the vicar for clergy of the diocese of Arlington, Virginia and a son of the late Supreme Court Justice Antonin Scalia.

The Institute says the guidelines were then reviewed by four other medical doctors, another Arlington priest, another Dominican and Msgr. Robert Vitillo, secretary general of the International Catholic Migration Commission.

Blair's memo also recommends guidelines the Thomistic Institute has prepared for restarting the practice of confession, and for how to anoint the sick while preventing spread of the virus.

For confession during the first phase of reopening, the Institute suggests that the sacrament can be practiced in person while keeping a 6-foot distance between the confessor and penitent.

This story appears in the Reopening post pandemic feature series. View the full series.
A version of this story appeared in the May 15-28, 2020 print issue under the headline: Bishops release guidelines for reopening of churches.