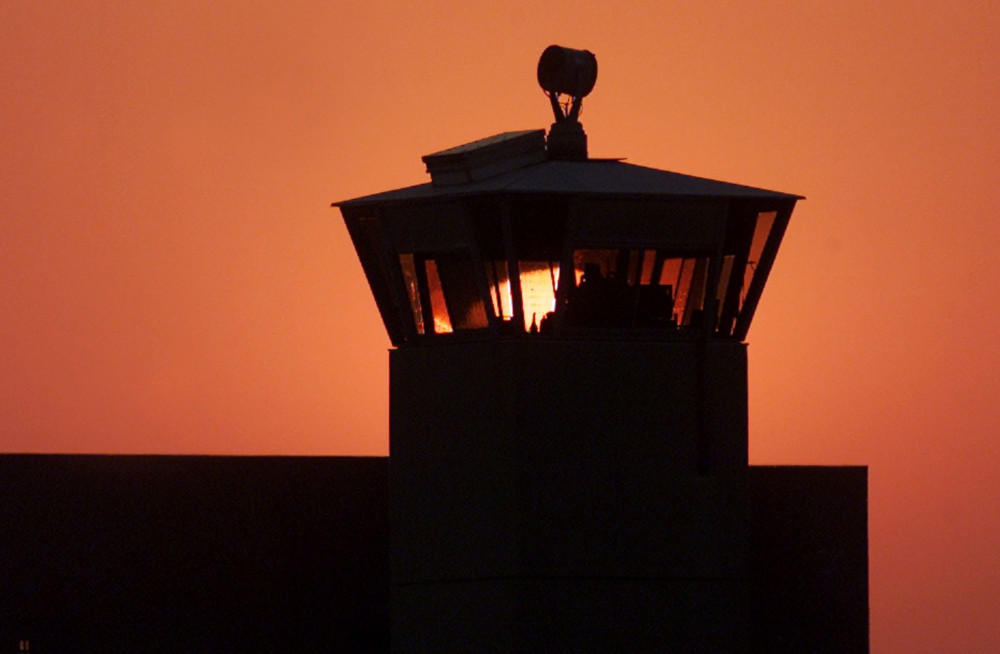 In this file photo, the sun sets behind one of the guard towers at the Federal Correctional Complex in Terre Haute, Ind., June 10, 2001. (CNS/Reuters/Andy Clark)

Just hours before the sixth federal execution took place this year, and two days before the next one was scheduled, two U.S. bishops' committee chairmen called on the government to end this practice.

They said the Catholic Church "must give concrete help to victims of violence" and "encourage the rehabilitation and restoration of those who commit violence." They noted that "accountability and legitimate punishment are a part of this process" and emphasized that "responsibility for harm is necessary if healing is to occur and can be instrumental in protecting society."

"Executions are completely unnecessary and unacceptable, as Popes St. John Paul II, Benedict XVI and Francis have all articulated," they added.

The bishops' statement was issued the day before Barr, a Catholic, was scheduled to receive the Christifideles Laici Award, named for John Paul's postsynodal exhortation, at the National Catholic Prayer Breakfast. The award is given by the independent Catholic organization in "honor and gratitude for fidelity to the church, exemplary selfless and steadfast service in the Lord's vineyard."

The Association of U.S. Catholic Priests, Catholic Mobilizing Network and the Santa Fe Archdiocese's Office of Social Justice and Respect Life spoke out against Barr receiving this honor, emphasizing that in his role as attorney general, he directed the federal government in July 2019 to resume the execution of prisoners on federal death row.

The Catholic Mobilizing Network, which works to end use of the death penalty and promotes criminal justice reform and restorative justice, relaunched its petition against federal executions in early September, emphasizing that Barr was being honored "despite promoting actions contrary to Catholic teaching."

And a Sept. 23 statement by the group's executive director, Krisanne Vaillancourt Murphy, further denounced Barr's award, especially for its presentation in between two federal executions, saying it "could mislead the public to believe the Catholic Church somehow condones the death penalty. This is categorically false." 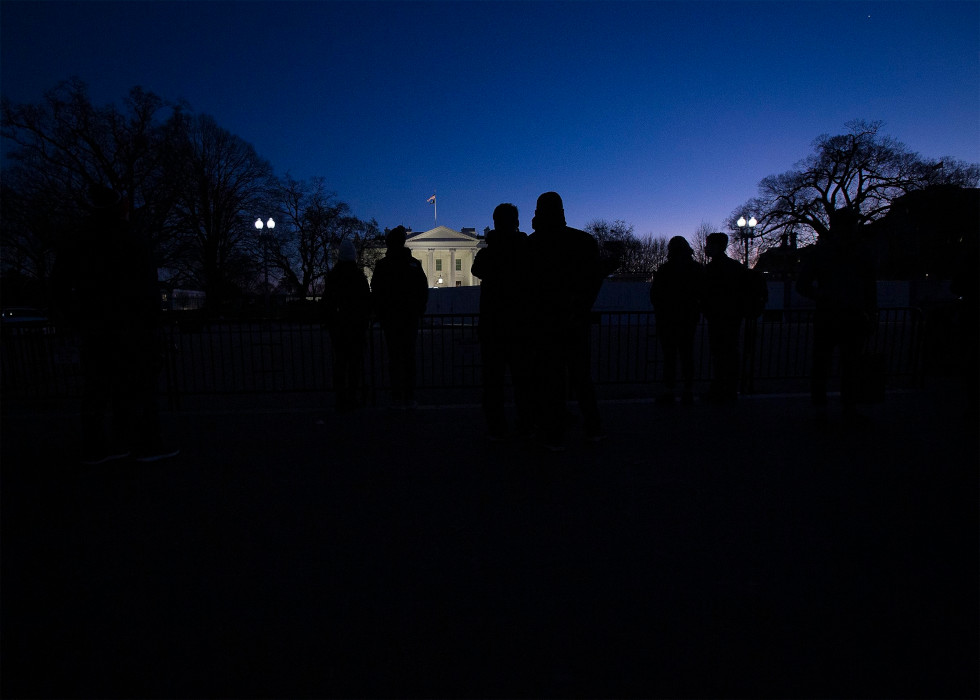 People are seen at sunset Jan. 6, 2020 near the White House in Washington. (CNS/Tyler Orsburn)

She also said that under Barr's leadership, the Department of Justice has "carried out more executions in 2020 than in any other comparable time in the past 70 years. Nothing about this is pro-life."

The Catholic Mobilizing Network led a virtual prayer vigil Sept. 22, hours before the federal execution of 50-year-old William Emmett LeCroy, who was charged with the 2001 murder of a Georgia nurse.

They were to lead another virtual prayer vigil Sept. 24 before the scheduled execution of Christopher Vialva, a 40-year-old from Texas who was convicted of kidnapping and killing an Iowa couple in 1999. Vialva will be the first Black man to be executed since the federal executions resumed this year after a 17-year hiatus.

In prison, Vialva became a Messianic Jew and in recent years he has regularly ministered to fellow inmates, according to a report on WFIU public radio in Indiana.

LeCroy received a lethal injection Sept. 22 at the federal prison in Terre Haute, Indiana. Nearby was his spiritual adviser, Sr. Barbara Battista, a Sister of Providence of St. Mary of the Woods.

Battista told local radio station WTWO in Indianapolis that during the execution, members of her order were planning to join death penalty protesters nearby. "We are attempting to send a clear message that says: 'No we need to stop this. No more death penalty, no more extrajudicial killing, stop police killing, stop mass incarceration,'" she said.

At the Sept. 22 virtual prayer service, a statement written by Atlanta Archbishop Gregory J. Hartmayer was read aloud to the 215 online participants. It said: "The death penalty goes against the church's pro-life teaching rooted in the inherent dignity of every human person. It jeopardizes innocent lives since the justice system has wrongfully convicted innocent people."

He also said "a convict who is killed never has an opportunity to repent or seek reconciliation with those he or she may have hurt. We must always leave open the door for redemption and rehabilitation."

He also prayed for government employees involved in carrying out the death penalty and that "our judicial and political system may find a way to end the death penalty, so as to achieve a measure of justice that does not involve the violence of execution of a fellow human being."