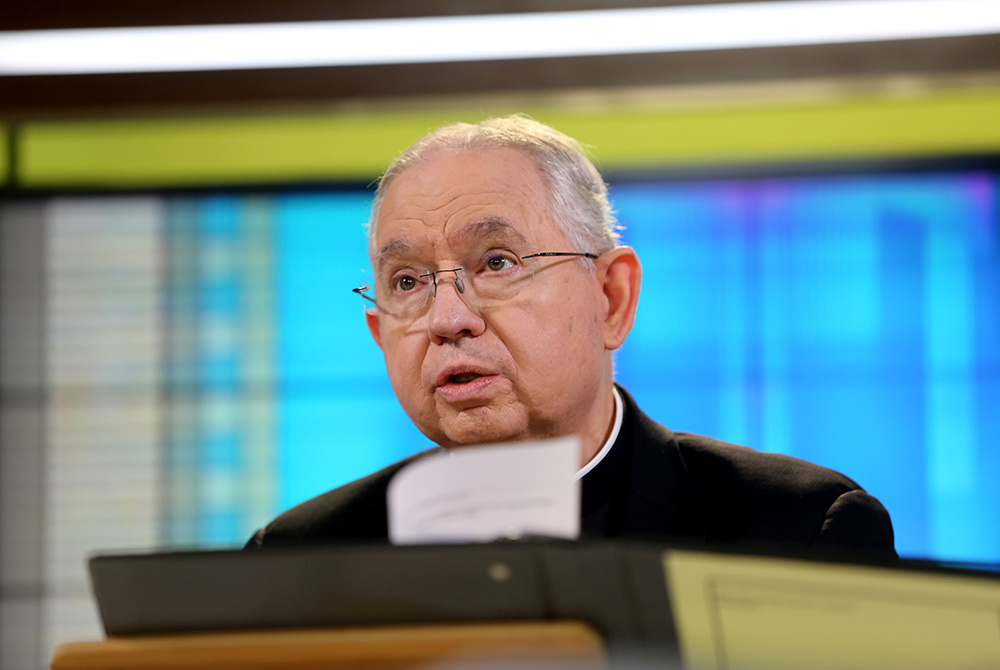 On the opening day of a closely watched and at times chaotic virtual meeting of the U.S. Catholic bishops on June 16, a majority of U.S. prelates voted to limit discussion on whether to proceed with drafting a contentious document regarding Communion and pro-choice Catholic politicians.

Following months of open discord among the bishops about the necessity of such a document, the prudence of advancing it in a virtual format and a Vatican intervention urging caution, Pope Francis' U.S. representative encouraged unity and dialogue, telling the U.S. bishops that "If you want to go fast, go alone, if you want to go far, go together."

"The starting point, therefore, cannot be to shame the weak but to propose the One who can strengthen us to overcome our weaknesses, especially through the sacraments of reconciliation and the Eucharist," said Archbishop Christophe Pierre, who has served as the papal nuncio to the United States since 2016.

"We are not a church of the perfect but a pilgrim church in need of the mercy offered generously by Christ," the nuncio said. 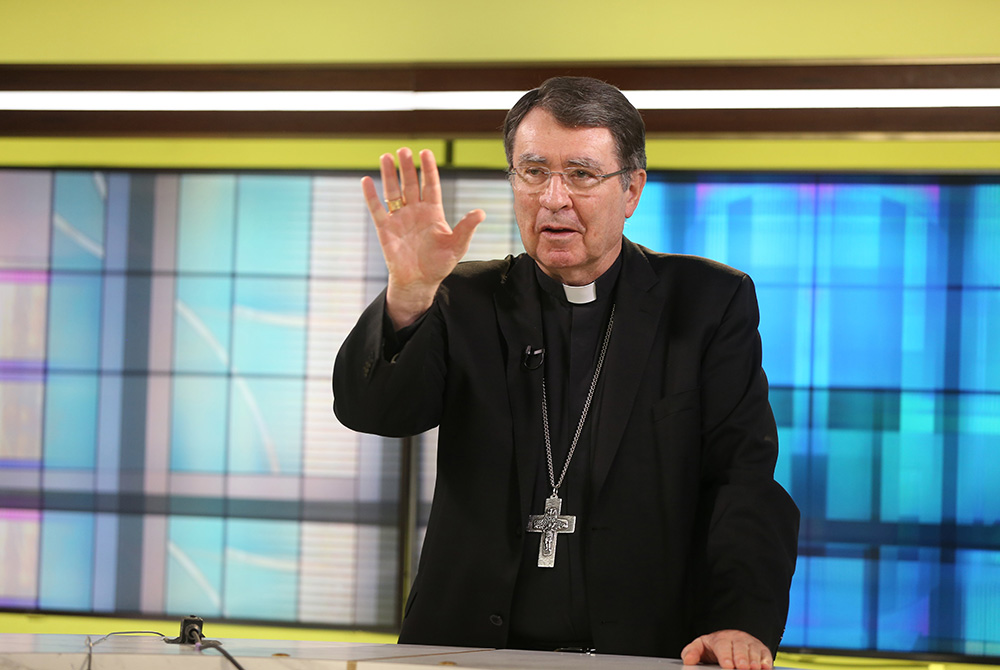 Archbishop Christophe Pierre, apostolic nuncio to the United States, gestures June 10, before recording his address to be delivered the first day of the U.S. Conference of Catholic Bishops' spring meeting. (CNS/Bob Roller)

Plans for a document on Communion that specifically addresses Catholics politicians were announced following the election of President Joe Biden, only the second Catholic president in U.S. history. The bishops are currently scheduled to vote on June 17 whether to allow the doctrine committee of the U.S. bishops' conference to begin drafting the document.

Given the high stakes nature of the proposal, Archbishop Mitchell Rozanski of St. Louis, Missouri, began the meeting by introducing a motion to amend the agenda to allow any bishop to speak on the wisdom of drafting such a document ahead of the vote.

"This topic and its implications are so far reaching and putting limits on the amount of time given for our discussion will not help us," he said. "I urge that this opportunity be offered for all who wish to speak, so that the fullest discernment be achieved at our meeting."

Rozanski's motion prompted a lively debate with more than 20 bishops weighing in for and against the proposal. That debate upended the meeting's agenda, resulting in it going over schedule by an hour. Prior to Rozanski's intervention, retired Bishop Michael Pfeifer, emeritus of the Diocese of San Angelo, Texas, also suggested, unsuccessfully, the additional agenda item of addressing what he described as Biden's plans to allow for infanticide and forcing all Americans to pay for abortions. 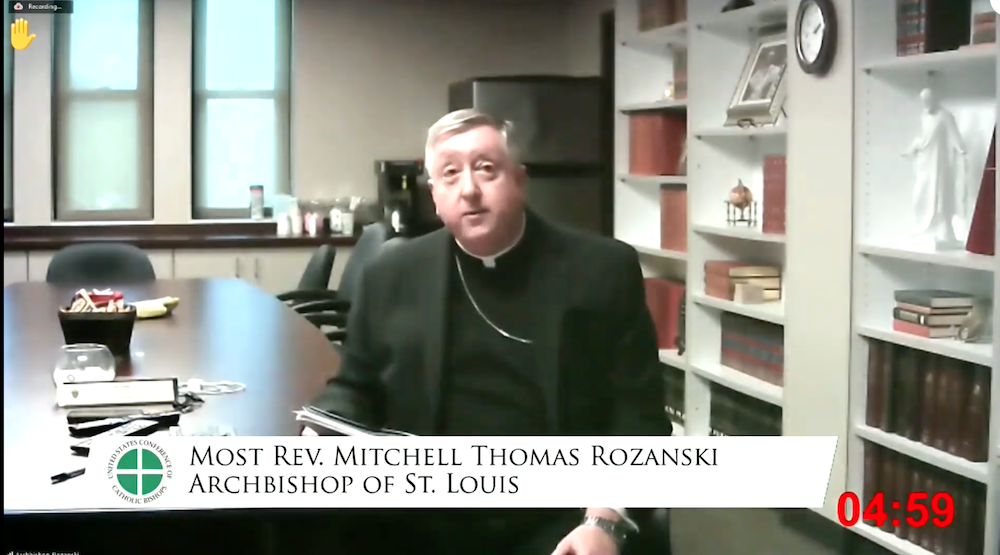 Several bishops expressed concern that the conference had not heeded a May letter from Cardinal Luis Ladaria of the Vatican's doctrinal office instructing the bishops' conference to engage in "extensive and serene dialogue" before moving forward.

Bishop Shawn McKnight of Jefferson City, Missouri, said Ladaria's letter was "not just one among many" and "every bishop who wishes to speak to this matter should be given the opportunity."

Even as many bishops struggled to operate the virtual meeting technology, including wrestling with how to unmute themselves, unintentionally requesting to speak and navigating audio issues, a number of bishops reiterated their belief that the proposal should be tabled until the bishops could meet in person again in November.

Despite noting that at least seven other bishops were waiting to speak on Rozanski's motion, U.S. bishops' conference president Archbishop José Gomez of Los Angeles said the bishops' were already behind schedule and called the discussion to a conclusion.

With 59% voting against it, the bishops voted down Rozanski's motion to allow any bishop who wishes to speak before voting on whether to begin drafting a document on the Eucharist.

As the debate over the church's sacraments has roiled the bishops' conference in recent months, Nuncio Pierre told the body that "Holy Communion is not merely a 'thing' to be received but Christ Himself, a Person to be encountered."

"A Catholicism that confuses itself with a mere cultural tradition or which cannot distinguish itself from other proposals, including political or ideological ones that are based on certain values, will never be convincing to this generation or to new ones," he said. "Jesus Christ is a Person, not a concept."

During his lengthy eight-page address, Pierre reiterated the word "unity" more than 20 times, saying that unity is required both among the bishops, as well as with Pope Francis. He implored the U.S. prelates to embrace the pope's model of encounter and dialogue, adding that "the goal of this dialogue should be unity and not merely doctrinal and juridical unity."

Following Pierre's remarks, Gomez delivered a presidential address in which he said the church was not "immune from the pressures of division" and that it must "guard against the temptation to think about the church in simply political terms."

"Unity in the church does not mean conformity of opinion or that bishops will never disagree. The apostles argued passionately," he said. "They disagreed over pastoral strategies and methods. But never about the truth of the Gospel."

He went on to add that the church's "unity is made real and visible in the Eucharist."

During a press conference following the first day of the three-day gathering, Bishop Kevin Rhoades, chair of the U.S. bishops' Committee on Doctrine, again insisted that the proposed document and upcoming vote was not about Biden or any one particular Catholic.

"This is important for every Catholic, not just Catholic politicians," he said.

This story appears in the Bishops, Biden and Communion and USCCB Spring Assembly 2021 feature series.