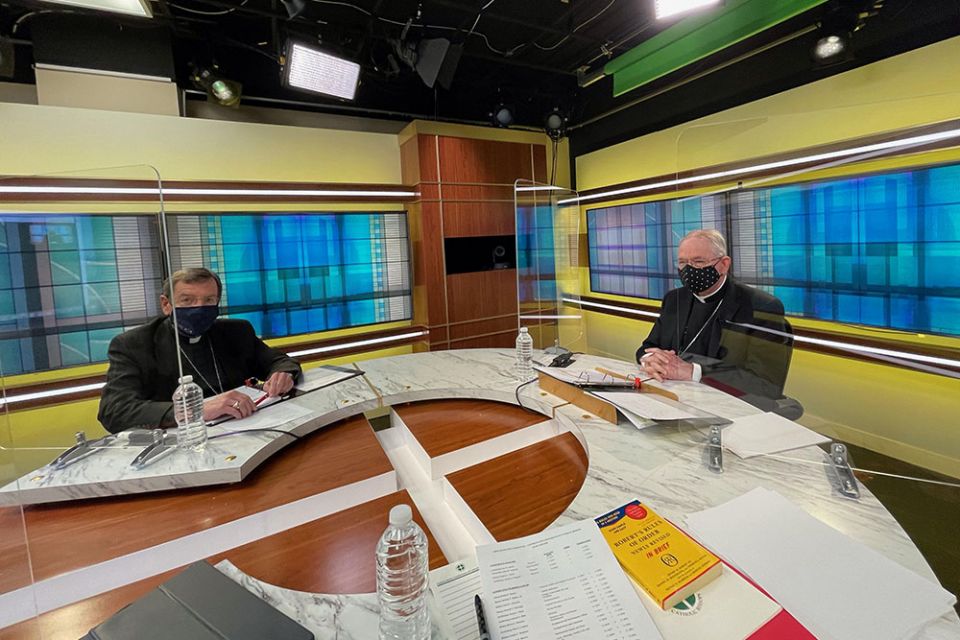 Detroit Archbishop Allen Vigneron, vice president of the U.S. Conference of Catholic Bishops, and Los Angeles Archbishop José Gomez, conference president, are pictured in the studio at conference headquarters in Washington Nov. 16, 2020. They were in the studio for the bishops' fall general assembly, convened virtually due to the coronavirus pandemic. This year's June 16-18 spring meeting will also be held virtually. (CNS/Courtesy of Msgr. J. Brian Bransfield)

The U.S. bishops begin their spring meeting today and all eyes will be focused on whether they will agree to the Doctrine Committee's request to draft a document on the Eucharist. The proposal originated with the working group the bishops formed after Joe Biden's election to consider how to deal with a pro-choice Catholic in the White House, so efforts to say it is not political can be dismissed as ridiculous and disingenuous period, full stop.

Still, you are going to hear a few lousy arguments over the next few days. So, roll up your sleeves, dear reader, and let's get vaccinated from the disingenuous and the stupid.

The worst historical argument cited by advocates of denying Communion to pro-choice politicians like Biden focuses on New Orleans Archbishop Joseph Rummel's excommunication of three pro-segregation Catholics in 1962. If he could excommunicate them for their stance on segregation, why can't the U.S. bishops decide to do the same to Biden?

Indeed, they are not really calling for a formal decree of excommunication, only that Biden be denied Communion, although to someone who goes to Mass as regularly as Biden, there is little difference between the two penalties. The Republican organization Catholic Vote even made a short video invoking the Rummel analogy in order to commend Bishop Thomas Paprocki of Springfield, Illinois, for denying Communion from pro-choice politicians in his diocese. This same Paprocki just did an interview with Church Militant, an organization that traffics in anti-Pope Francis conspiracy theories, routinely calls bishops heretics and regularly promotes the views of disgraced former nuncio Carlo Maria Viganò.

The problem with the analogy, of course, is that Rummel did not excommunicate the three Catholics in Louisiana because of their stance on a matter of public policy. He excommunicated the three because they denied his authority over the Catholic schools when he made the decision to integrate those schools. In short, the analogy is not on point.

There is a layer of moral analysis when considering how a politician, any politician, exercises their office, especially in a pluralistic democracy like our own. The bishops fail to note this distinction, which is critical in assigning moral responsibility.

Another lousy argument you will likely hear is that Francis, when he was still the archbishop of Buenos Aires, introduced the idea of "eucharistic coherence" as the principal drafter of the 2007 Aparecida document produced by CELAM, the continent-wide episcopal conference of Latin America and the Caribbean. The Catholic News Agency, in an "explainer," claimed that this document was the origin of the concept. Robert Royal of The Catholic Thing repeated the claim as well.

It is true that Paragraph 436 of the Aparecida document uses the phrase, but it also appears to leave the decision of whether or not to partake of Communion to the conscience of the legislator. At any rate, it is ambiguous. Here is the paragraph:

We hope that legislators, heads of government, and health professionals, conscious of the dignity of human life and of the rootedness of the family in our peoples, will defend and protect it from the abominable crimes of abortion and euthanasia; that is their responsibility. Hence, in response to government laws and provisions that are unjust in the light of faith and reason, conscientious objection should be encouraged. We must adhere to "eucharistic coherence," that is, be conscious that they cannot receive holy communion and at the same time act with deeds or words against the commandments, particularly when abortion, euthanasia, and other grave crimes against life and family are encouraged. This responsibility weighs particularly over legislators, heads of governments, and health professionals.

Regardless of how you interpret that paragraph, the idea did not originate with Cardinal Jorge Bergoglio. It was first broached by the reactionary Cardinal Alfonso López Trujillo at the 2005 Synod of Bishops. There, the Colombian cardinal focused not so much on abortion as on laws that recognized divorced and remarried unions and gay unions as marriages.

López Trujillo, who reportedly collaborated with military juntas in Latin America as they sought to oppress the poor and the clergy defending the poor, and a lifelong opponent of the canonization of St. Óscar Romero, led the fight against the use of condoms to stem the spread of AIDS, even challenging medical experts on the medical efficacy of their use. He, not Bergoglio, was the first person to deploy the argument about "eucharistic coherence," and his intervention at the 2005 synod unambiguously did not foresee any role for the conscience of a legislator as the 2007 Aparecida text clearly does.

A related argument that is still trotted out focuses on differentiating abortion from other public policies because it involves an intrinsic evil, while issues like immigration, poverty and the environment require prudential judgments. Catholics can disagree about prudential judgments but not about intrinsic evils like abortion. Raymond Arroyo repeated this canard just last week on his television show "The World Over."

Setting aside the fact that whether an evil is intrinsic is irrelevant when determining its gravity — so Arroyo et al. are already trafficking in the wrong category — all issues, even ones that involve intrinsic evils, require prudential judgment in their application.

The bishops would do well to start asking themselves: When the U.S. Supreme Court overturns Roe v. Wade, what should the laws criminalizing abortion look like? Should there be a distinction between an elective, surgical abortion and an abortion induced by taking a pill, and when the pregnancy is the result of rape or incest? How would you enforce the law? How broad an exception should there be when the life of the mother is at risk? Who goes to jail?

A final argument you will hear this week is simply disingenuous and we heard it in the letter from Archbishop José Gomez, president of the bishops' conference, explaining the process by which the conference arrived at this point. He said, "The focus of this proposed teaching document is on how best to help people to understand the beauty and the mystery of the Eucharist as the center of their Christian lives."

This is about punishing Biden, throwing some mud at him and hoping it will stick. The suggestion arose from the working group Gomez formed to address the "difficult and complex situation" posed by the Biden presidency. It has been pushed by those with a long history of opposing Catholic Democrats.

Most importantly, Gomez surely knows that it is unlikely those calling for the denial of Communion can reach the necessary two-thirds majority needed to pass a teaching document in November, and he also surely knows the Vatican would be unlikely to approve such a document. So why proceed? Because they can continue to generate headlines about Biden being a bad Catholic.

The irony is that it is the bishops who are making themselves look bad. With facetious and tendentious arguments, they look foolish to boot.

Column | Get vaccinated against lousy Communion arguments at US bishops' meeting