In US, Capuchins punch above their weight 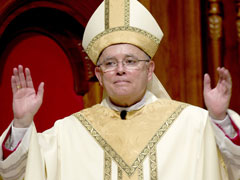 It’s an open secret that the go-to religious family in Pope Benedict XVI’s Vatican is the sons and daughters of Don Bosco, better known as the Salesians. Benedict’s top aide, Secretary of State Cardinal Tarcisio Bertone, is a Salesian, as is the Vatican’s highest-ranking woman, Italian Sr. Enrica Rosanna, undersecretary at the Congregation for Institutes of Consecrated Life and Societies of Apostolic Llife. Italian Cardinal Angelo Amato, the pope’s former deputy at the Congregation for the Doctrine of the Faith and today prefect of the Congregation for Saints, yet another Salesian in high places.

While there’s no exact equivalent of that pattern of patronage in the United States, more and more there is a religious community that seems to be punching well above its weight in terms of supplying influential leaders: the Order of Friars Minor Capuchin.

Consider where one can find American Capuchins popping up these days.

One is already a prince of the church: Cardinal Sean O’Malley of Boston, who prefers his simple brown Capuchin habit to the sartorial finery to which his office entitles him. The July 19 appointment of Charles Chaput as the new archbishop of Philadelphia put a second American Capuchin in line to join the College of Cardinals. That’s not a bad track record, especially given that the Capuchins have traditionally shunned the whole idea of its members becoming bishops anywhere other than in mission territory.

Capuchins are also movers and shakers in other arenas.

Since 2005, for instance, the executive director of the powerful Secretariat for Doctrine at the U.S. Conference of Catholic Bishops has been a Capuchin, Fr. Thomas Weinandy. (The bishops’ Committee on Doctrine is the body that recently issued a controversial critique of a book by theologian St. Joseph Sr. Elizabeth Johnson.) More recently, the new executive director of the Conference of Major Superiors of Men, Fr. John Pavlik, was drawn from the Capuchin ranks (see accompanying story).

Given the way things in the church often work -- those in power tend to turn to people they know to find key aides and to groom future leaders -- additional Capuchins may be popping up on the ecclesial radar screen as time goes on.

Although St. Francis of Assisi died in 1226, the Capuchins date from 1528, when three friars launched a reform intended to restore the original Franciscan ideals, which they believed had been lost. (One of the early leaders of the Capuchins, Bernardino Ochino, ultimately renounced the Catholic church to join the Protestants.)

Although Capuchins have ministered in what is now the United States since the 17th century, the first formal establishment dates from 1856. Today there are roughly 11,000 Capuchins worldwide and some 700 in North America.

For what it’s worth, Chaput believes there’s no “truth or substance” to the idea of a Capuchin ascendancy, in the sense of a conscious effort to put Capuchins into leadership positions in America. Speaking of himself and O’Malley, he said they probably became bishops because of other elements on their resumés -- O’Malley initially because of his experience in ministering to Hispanic communities, Chaput because of his Native American ancestry. (Chaput’s mother, who died in 2007, was a member of the Potawatomi tribe.)

That said, Chaput insisted that his Capuchin background is central to his identity.

“I think being a Capuchin has taught me qualities such as collaboration, and embracing the Gospel in very simple and clear ways,” he said. “St. Francis said we should embrace the Gospel without gloss, which meant without making excuses that would explain away our commitment. I really am very conscious about my responsibility to do that, in my preaching and also in my decisions about church life. I hope that it has made me a good bishop, but it certainly has influenced the way I think about being a bishop.”

“Being a Capuchin really is who I am,” Chaput said. “If people want to know me, they ought to know the Capuchin tradition.”

In US, Capuchins punch above their weight