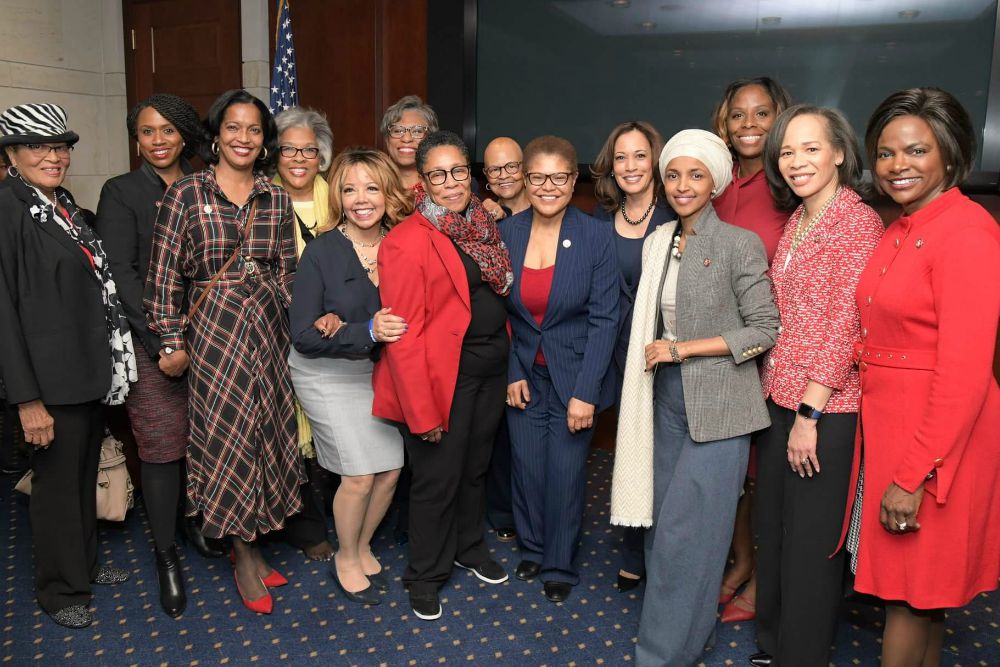 Newly-elected women members of the 116th Congress who are part of the U.S. Congressional Black Caucus, pictured together on Jan. 9 (Wikimedia Commons/Sen. Kamala Harris)

If issues of race, ethnicity, religion, gender and sexual orientation seem unusually contentious these days, that's because they are.

For one, white Christians are no longer the majority in the U.S. That reality, combined with the normal slow shifts in public opinion that make younger generations generally more open to diversity in various forms, helps explain why Americans elected their first black president in 2008, then reelected him in 2012. It also explains why previously unrepresented groups — like Native American and Muslim women — are getting seats in Congress.

Perhaps counterintuitively, those dynamics, according to experts, could also help explain the racially-tinged backlash against President Barack Obama, the growth of anti-immigrant sentiment and the increased visibility of white supremacist groups. Demographic shifts can be frightening for those who are losing their majority status, and history shows that such changes don't always happen smoothly.

The fact that the shift is most pronounced among Americans too young to vote also means that elected officials still don't represent the nation's diversity, and that the country has yet to see the full impact of the changes in progress.

Robert Jones, CEO of the Public Religion Research Institute, called the current situation a "demographic tipping point." The percentage of Americans who are white Christians dropped from 54 percent to 42 percent between 2008 and 2018, he said.

Cultural attitudes around gender, ethnicity, sexual orientation and religion are also gradually changing, said Maureen Day, a professor of religion and society at the Franciscan School of Theology near San Diego.

But demographic and cultural changes haven't fully reached the electorate yet and cause anxiety for some who sense a threat to white Christians' grip on political power, said Jones. The tension between growing acceptance of the increased diversity in American society and the rise of extremist groups pushing against these changes could mean that the country's future "may be rough yet for a while."

Both Jones and Day suggested that demographic shifts help explain why Americans elected Obama twice and why Congress is becoming more diverse. 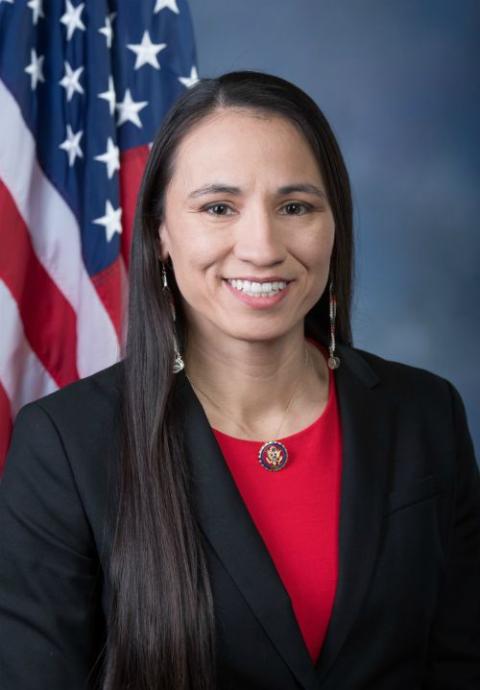 U.S. Rep. Sharice Davids is a member of the Ho-Chunk Nation and the first of two Native American women to ever in serve in Congress (along with Deb Haaland of New Mexico). She represents Kansas' 3rd District and is also the first openly LGBT person to represent that state. (Wikimedia Commons/U.S. House Office of Photography/Kristie Boyd)

The 116th Congress, sworn in Jan. 3, has record numbers of female and LGBT members and is one of the most ethnically and religiously diverse in the nation's history. It features the first Muslim women and the first Native American women in Congress, and some states elected their first female senators or their first African American congresswomen.

"We're in this kind of gap where the population has become much more diverse in terms of race and religion than it is represented at the ballot box, so we're just starting to see, I think, the front edge of these changes showing up in Congress that have already happened in the general population," Jones said.

Some strains of American politics also seem directly opposed to increased diversity. President Donald Trump has followed through on anti-immigrant campaign promises, and a PRRI survey found that 54 percent of Americans believe he has encouraged the activities of white supremacists.

While Day cautioned against interpreting Trump's election as indicative of a broad backlash — 53 percent of people who voted for him said their decision represented opposition to Hillary Clinton more than support of his policies — she noted white supremacist marches and growing incidents of racial violence as evidence of a "movement-countermovement dynamic happening within U.S. politics."

"We see two sides of America … comfortable with diversity versus not — and both of them growing," she said. "There's definitely evidence that there is an anti-immigrant voice in the U.S. that is gaining momentum."

While this political situation might be unusual, it isn't totally unprecedented, Jones said.

"Whenever we have these big moments of demographic and cultural change, we do tend to see the rise of … extremist groups," including anti-Catholicism in the early part of the 20th century "that coincided with the rise of Jim Crow" and was aimed at "preserving a white Protestant lock on power" as the group lost its majority status, he said.

The current tipping point might be "even more anxiety-ridden" because white Christians overall are becoming a minority, and even bigger changes are expected in the future, said Jones. The absolute population of whites dropped for the first time on record last year, school-age children under 10 are already majority non-white, and current estimates predict the U.S. will become majority non-white around 2042.

"Even if people don't know the statistics, they feel these changes around them," which could be why Obama's election provoked a movement with "racist undertones" questioning his legitimacy and the rise of "alt-right and white supremacist groups," Jones said.

Cultural shifts, which typically happen gradually as older generations pass away, are also in progress, Day said. These shifts could increase people's familiarity with LGBT individuals and religious minorities and their willingness to elect more members of those groups — as well as more women and people of color.

It's also becoming easier for politicians to admit openly that they aren't committed to a faith tradition at all, said Day, who speculated that in the past those without an affiliation probably claimed to identify as Christian. 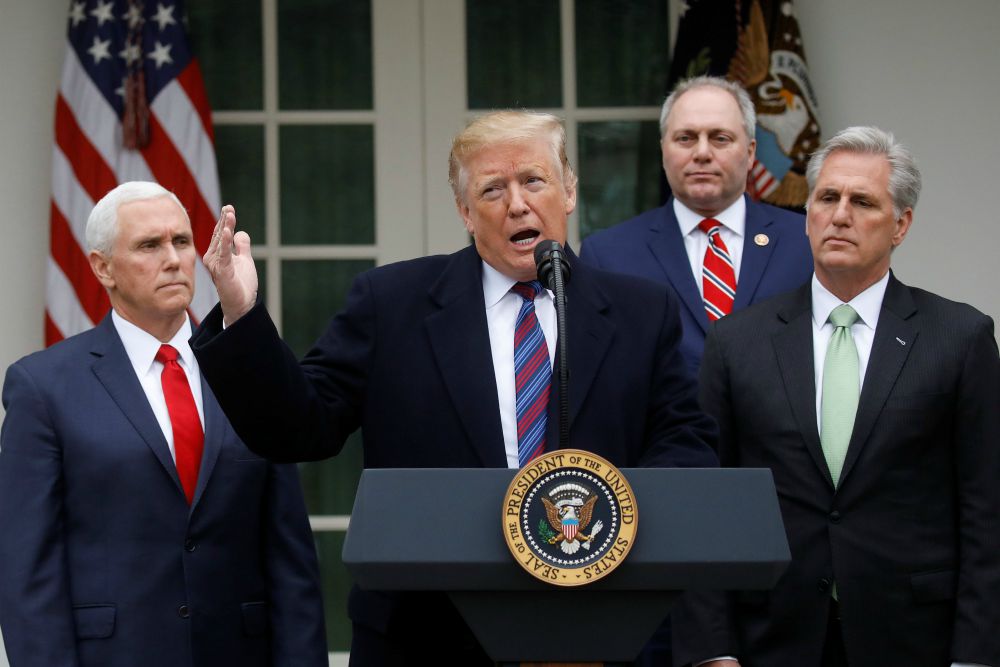 So far, Congress' increases in diversity have happened mostly within the Democratic Party. No Republicans in Congress are openly LGBT, only 6.4 percent are non-white, and only two (both Jewish) identify as something other than Christian. But Day and Jones said they expect changes to extend to Republicans, too, as the electorate becomes even more diverse.

Elected Democrats are more diverse, in part because "Democrats themselves are more diverse," Day said, "so it'll take, I think, a growing diversity in the Republican Party for them to want to elect people that are of that diversity. As the U.S. as a whole is becoming more and more people of color, we would expect" Republicans to embrace more groups that aren't white or Christian.

In the short term, Republicans aren't embracing diversity even though their own "postmortem" for the 2012 election said the party should increase diversity, support immigration reform and reach out to Latinos, Jones said.

In the long term, "if they want to be a nationally competitive party, [Republicans are] going to have no choice but to diversify," Jones said.

He predicted that the coming years of transition could continue to be difficult for the nation.

"I think we can look back at American history and we tend to have these rough periods. Historically we have managed to get through them," Jones said, pointing to California as a sign of hope — the state successfully navigated demographic changes decades before those changes hit the rest of the U.S.

But the nation has a "tough road ahead" because top leadership is "creating more divisive than unifying narratives" Jones said. In order to navigate the transition successfully, we'll need political and cultural leaders who can help people "have a story about the country and its future that everyone can see themselves in."

In the meantime, Day sees recent increases in Congress' diversity as a positive step.

"It's great that we are getting, increasingly, a political body that represents the whole of the United States," Day said. While the legislature is still dominated by whites, Christians and men, she appreciates "that more and more voices that have been historically not present at the policy-making table are now going to be having input and helping to shape the policies that affect America as a whole."

[Maria Benevento is an NCR Bertelsen intern. Her email address is mbenevento@ncronline.org]