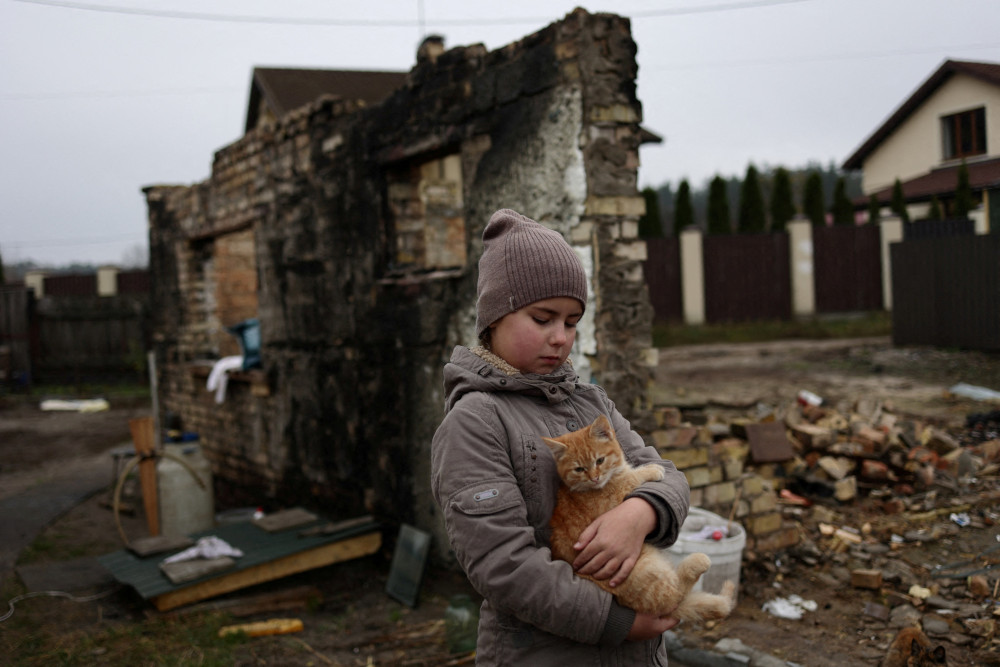 A Ukrainian Catholic archbishop asked his fellow U.S. bishops Nov. 16 to pray for Ukraine, and, if possible, to go to Ukraine and pray there for its people, inviting them on a trip he is embarking on in February.

What Ukrainians are facing amounts to genocide, he said.

In Baltimore, on the second and last public day of the fall general assembly of the U.S. Catholic Conference of Bishops, Archbishop Borys Gudziak of the Ukrainian Catholic Archeparchy of Philadelphia thanked the bishops and their leadership for spearheading U.S. Catholic support for a nation under attack by Russia since February.

He spoke of the hospital, schools, cities and lives snuffed out or destroyed in Ukraine since Russia began attacking it.

But under attack, it has come to embody the best of Catholic social doctrine, he said, organizing, mobilizing and being part of a worldwide movement of solidarity that seeks to help David triumph over Goliath.

"Russia is the last of the European empires, and scandalously it is the last to use the Gospel, the church, to justify colonialism," he said.

Russia is 28 times bigger than Ukraine, the archbishop said, yet it seeks to dehumanize the smaller nation, calling its citizens Nazis to justify killing them, he added.

He thanked the U.S. Catholic Church for its financial and spiritual support for Ukraine. It has helped buoy the Ukrainian spirit that will fight for its independence, he said.

After Gudziak's update, Cardinal Robert W. McElroy of San Diego urged the body of U.S. bishops to "make it a very high priority" to urge continuing U.S. aid in its policy work, continuing help to the nation since there are "rumblings of cutting the support to Ukraine from the United States."

Though he did not elaborate, he mentioned "the dawn of a new house," likely referring to the House of Representatives, which will likely be controlled by the Republican Party and whose members have started expressing discontent with aiding the country.

"That could be very ominous in terms of the continuity of weapons and support," the cardinal said, adding that keeping aid to Ukraine coming "is essential in convincing the Russians that they cannot succeed."

Gudziak also asked that all the bishops consider hosting one Ukrainian family in their respective dioceses.

He said the Catholic Church in particular has been generous, receiving refugees, not in camps, but in homes, schools, convents and monasteries.

"I want to thank you for praying, for staying informed, advocating and for helping," he said. "Catholics in Ukraine have been explaining Catholic Social Doctrine: unalienable God-given human dignity, solidarity, subsidiary, the common good."

And they have done so with help from "American Catholics who have supported Ukraine through thick and thin" in the past and in the present.

"I venture to say that you have helped Ukrainian people be who they are," he said. "Those efforts have helped them understand what Catholic social doctrine is ... no act of good is lost, no gesture of solidarity is without fruit."

As a result, many Ukrainians are offering their lives in service and sacrifice for others, he said.

He invited them to join him on a humanitarian trip in early February, adding that New York Cardinal Timothy M. Dolan had visited.

"We will see some things. You'll be inspired and you'll see how much you have contributed to this fortitude, to this virtue, to this belief in eternity, that, in the end, is what is in the hearts of people who give their lives," Gudziak said.

"They give their lives because they know there's something more than just little me and my little chronology. There's eternal life. It's Christ-like. There's no greater love than to lay down one's life for one's friends," he said.

The archbishop offered his comments a day after Russia once again attacked civilian dwellings in the capital of Kyiv and widely hit infrastructure around the country, including in Lviv in western Ukraine, close to the border with Poland.

The same day, a Russian-made missile hit Poland, killing two, but details of who fired it were under investigation with some U.S. intelligence pointing to an accidental interception by Ukraine possibly leading to the incident.

Earlier, Ukrainian president Volodymyr Zelenskyy had called for peace, via video, during a meeting of the G20, an international forum representing the world's largest economies gathering this year in Bali, Indonesia.

Jake Sullivan, U.S. national security adviser, said in a Nov. 15 statement that as world leaders gathered to talk about important issues affecting the "lives and livelihoods of people around the world, Russia again threatens those lives and destroys Ukraine’s critical infrastructure."

Russian President Vladimir Putin did not attend the gathering, sending instead Russia's foreign minister, Sergey Lavrov, to the summit.