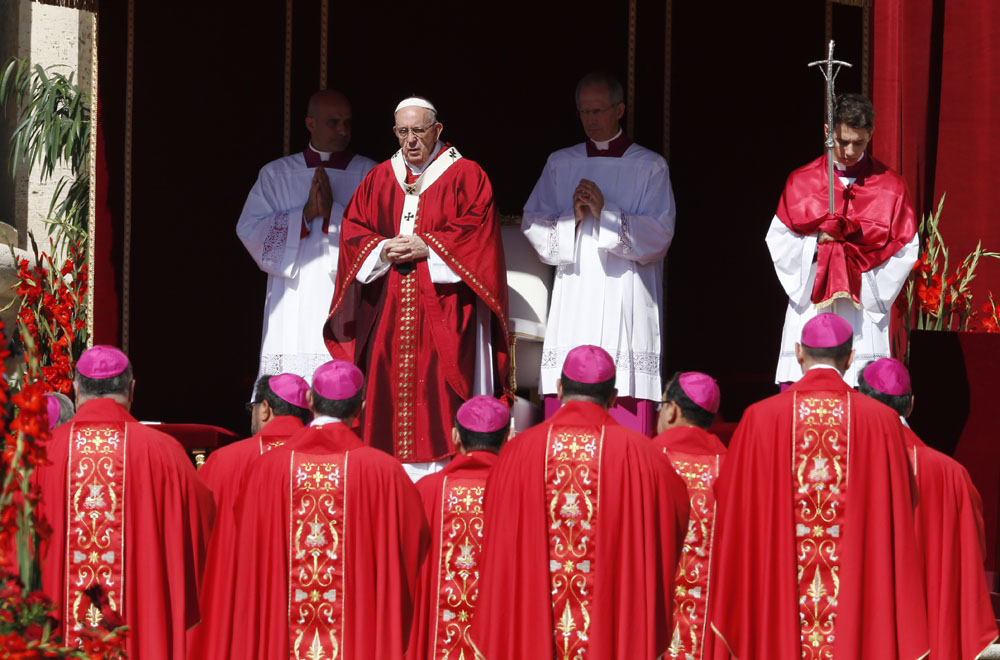 One of the proposals made at last month's meeting of U.S. Catholic bishops for investigating future allegations of misconduct by prelates appears likely to receive Vatican approval, according to several eminent canon lawyers and theologians.

The suggestion to empower the nation's metropolitan archbishops to examine accusations made against bishops in their regions of the country corresponds both with the way the church handled such issues in earlier centuries and the current Code of Canon Law, they say.

Nicholas Cafardi, a respected civil and canon lawyer, noted that the current version of the code already says the Vatican can give archbishops "special functions and power" in their regions "where circumstances demand it."

"This function could be to receive and investigate accusations of sexual impropriety ... and then to report to the Holy See on the results," said Cafardi, who has advised bishops and dioceses on canonical issues for decades.

Richard Gaillardetz, a theologian who has written several books on the practice of authority in Catholicism, said simply: "It's just good ecclesiology."

"It wouldn't be too hard to envision the Holy See granting metropolitans special functions, and I could imagine that being done," he said.

In the Catholic Church, metropolitan archbishops are those who are tasked with both leading an archdiocese and presiding over the bishops in their wider ecclesiastical province. While their role in their provinces has been largely honorific in recent centuries, it was much more expanded in the earlier church.

"It would be an interesting move," Jesuit Fr. Steven Schoenig, a historian who has focused his research on the role of archbishops in the Middle Ages, said of the proposal. "It would kind of restore things to an earlier stage in the church's history."

The possibility of empowering archbishops to investigate allegations made in their provinces was raised at the annual meeting of the bishops' conference in November, when the prelates were considering a number of proposals to respond to this year's spate of revelations of clergy sexual abuse.

Chicago Cardinal Blase Cupich, a metropolitan archbishop himself, formally submitted the proposal at the end of the Nov. 12-15 meeting. Galveston-Houston Cardinal Daniel DiNardo, the president of the conference, said it would now be evaluated alongside a separate suggestion for the creation of a new nonprofit commission to investigate accusations against bishops.

There are 34 metropolitan archbishops in the U.S. One example is Seattle Archbishop Peter Sartain, who presides over a province that includes the dioceses of Spokane and Yakima in Washington State.

Cupich's proposal gained the backing of bishops across the ideological spectrum at the November meeting, with others such as Philadelphia Archbishop Charles Chaput and San Francisco Archbishop Salvatore Cordileone expressing support.

Cafardi, an original member and chair of the conference's National Review Board, set up in 2002 to monitor the prelates' procedures to protect children, referenced Canons 435-438, which lay out the authority of metropolitan archbishops.

Among the tasks given to metropolitans in the first part of Canon 436 is to "exercise vigilance" in the observance of the faith in their regions.

The second part of the canon goes further, stating: "Where circumstances demand it, the Apostolic See can endow a metropolitan with special functions and power to be determined in particular law."

Cafardi said he could envision a scenario in which the U.S. bishops use that language to ask the Vatican to give the country's metropolitans power to conduct abuse investigations, and that it could be granted.

The U.S. bishops have already announced creation of a new third-party reporting system for receiving allegations of misconduct by prelates. The system is to consist of a toll-free number and a website where people can report accusations, and is to be active by July 2019.

Under Cupich's proposal, the third-party system would then send to the various metropolitan archbishops any allegations that a bishop in their province had sexually abused a minor, an adult, or had been negligent in their handling of abuse cases.

In the case where it was the metropolitan himself accused, the allegation would be sent to the most senior bishop in the province.

The proposal makes clear that the allegation is also to be sent to the bishop or archbishop's clergy abuse review board, a structure every diocese is required to have under the 2002 Charter for the Protection of Children and Young People.

Gaillardetz, a former president of the Catholic Theological Association of America, said he thought the proposal "thickens the exercise of subsidiarity" in the church, referring to a principle in Catholic social teaching that problems should be dealt with at the lowest level where they can be effectively handled.

"In general, I'm in favor of ... strengthening any kind of intermediate collegial authority," said Gaillardetz," the Joseph Professor of Catholic Systematic Theology at Boston College.

Schoenig, an associate professor at St. Louis University, said the proposal reflected the role metropolitans played in the church from about the year 700 to about the year 1,200, when popes began to limit their authority.

The Jesuit said that metropolitans used to have responsibility for confirming the election of bishops in their provinces, more freely investigating any allegations of misconduct, and presiding over a court of appeal that could reconsider canonical decisions made by local prelates.

Schoenig said the proposal sounded like "a return to the early Middle Ages in certain ways, when Rome was just not as much involved."

"If we could restore some of these old rights of these metropolitans ... it would make a more agile church that could respond more quickly and with greater familiarity to local circumstances," he said.

While Gaillardetz expressed approval for the idea of empowering metropolitans, he said he was also hoping for further measures to more deeply examine the roots of the clergy sexual abuse crisis.

Referencing Pope Francis' upcoming February summit with the presidents of the world's conferences of bishops, the theologian said it was his "fantasy" that the pontiff would encourage the bishop presidents leaving the meeting to go home and convoke nation-wide plenary councils to consider the crisis.

A plenary council is a special gathering of a national church territory that involves the participation of bishops, heads of religious orders and universities, and laypeople. The U.S. last held such a council in 1884.

"That goes back to the whole problem of you're asking an episcopal structure to address a problem of episcopal malfeasance," said Gaillardetz, adding that plenary councils are "by law, a gathering not of the bishops but of the entire Christian faithful."

Holding a council, he said, "takes much longer to do, but it's more likely to ... allow the people of God to feel like they're part of the process, which kind of addresses the sense of impotence that so many people have in this situation."

"You're also more likely to get a much more comprehensive assessment of what got us in this situation," said Gaillardetz.

A version of this story appeared in the Dec 28, 2018-Jan 10, 2019 print issue under the headline: Vatican likely to empower archbishops on abuse claims against bishops.