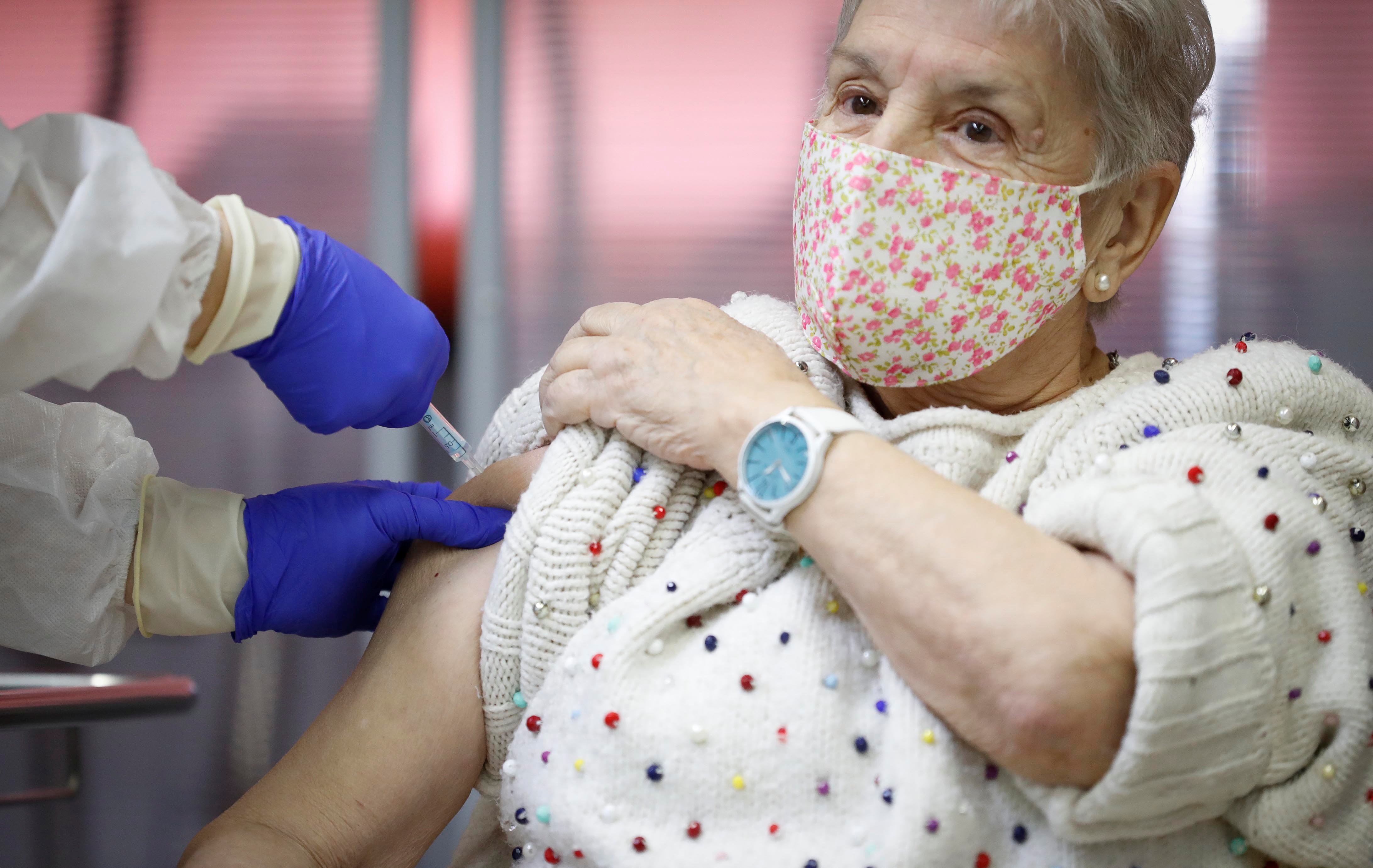 An elderly woman receives an injection with a dose of Pfizer-BioNTech COVID-19 vaccine at Vallecas nursing home in Madrid Dec. 27, 2020. (CNS/Comunidad de Madrid handout via Reuters)

The Vatican's coronavirus commission and the Pontifical Academy for Life issued a joint statement calling for a coordinated international effort to ensure the equitable distribution of COVID-19 vaccines worldwide.

The document highlights the "critical role of vaccines to defeat the pandemic, not just for individual personal health but to protect the health of all," the Vatican said in a statement accompanying the document Dec. 29.

"The Vatican commission and the Pontifical Academy of Life remind world leaders that vaccines must be provided to all fairly and equitably, prioritizing those most in need," the Vatican said.

The pandemic has exacerbated "a triple threat of simultaneous and interconnected health, economic and socio-ecological crises that are disproportionately impacting the poor and the vulnerable," the document said. "As we move toward a just recovery, we must ensure that immediate cures for the crises become stepping-stones to a more just society, with an inclusive and interdependent set of systems."

Pope Francis established the COVID-19 commission in April with the goal of expressing "the church's concern and love for the entire human family in the face of the of COVID-19 pandemic."

Led by Cardinal Peter Turkson, prefect of the Dicastery for Promoting Integral Human Development, the commission is tasked with collaborating with other Vatican offices to coordinate its work, including "an analysis and a reflection on the socioeconomic and culture challenges of the future and proposed guidelines to address them."

Turkson said that while the Vatican is grateful for the scientific community's speedy development of the vaccine, it is "now up to us to ensure that it is available to all, especially the most vulnerable."

"It is a matter of justice," he said. "This is the time to show we are one human family."

Archbishop Vincenzo Paglia, head of the Pontifical Academy for Life, said his office is working with the commission to address the ethical issues regarding the vaccines' development and distribution.

The joint document reiterated the points made Dec. 21 by the Congregation for the Doctrine of the Faith regarding the moral implications of receiving COVID-19 vaccines that were developed or tested using cell lines originating from aborted fetuses.

It also cited the congregation's 2008 instruction, "Dignitas Personae," which states that "grave reasons may be morally proportionate to justify the use of such biological material."

The Pontifical Academy for Life, the document said, also has addressed the issue of developing vaccines using tissue from aborted fetuses; while it called for a "commitment to ensuring that every vaccine has no connection in its preparation to any material originating from an abortion," it also said that "the moral responsibility to vaccinate is reiterated in order to avoid serious health risks for children and the general population." 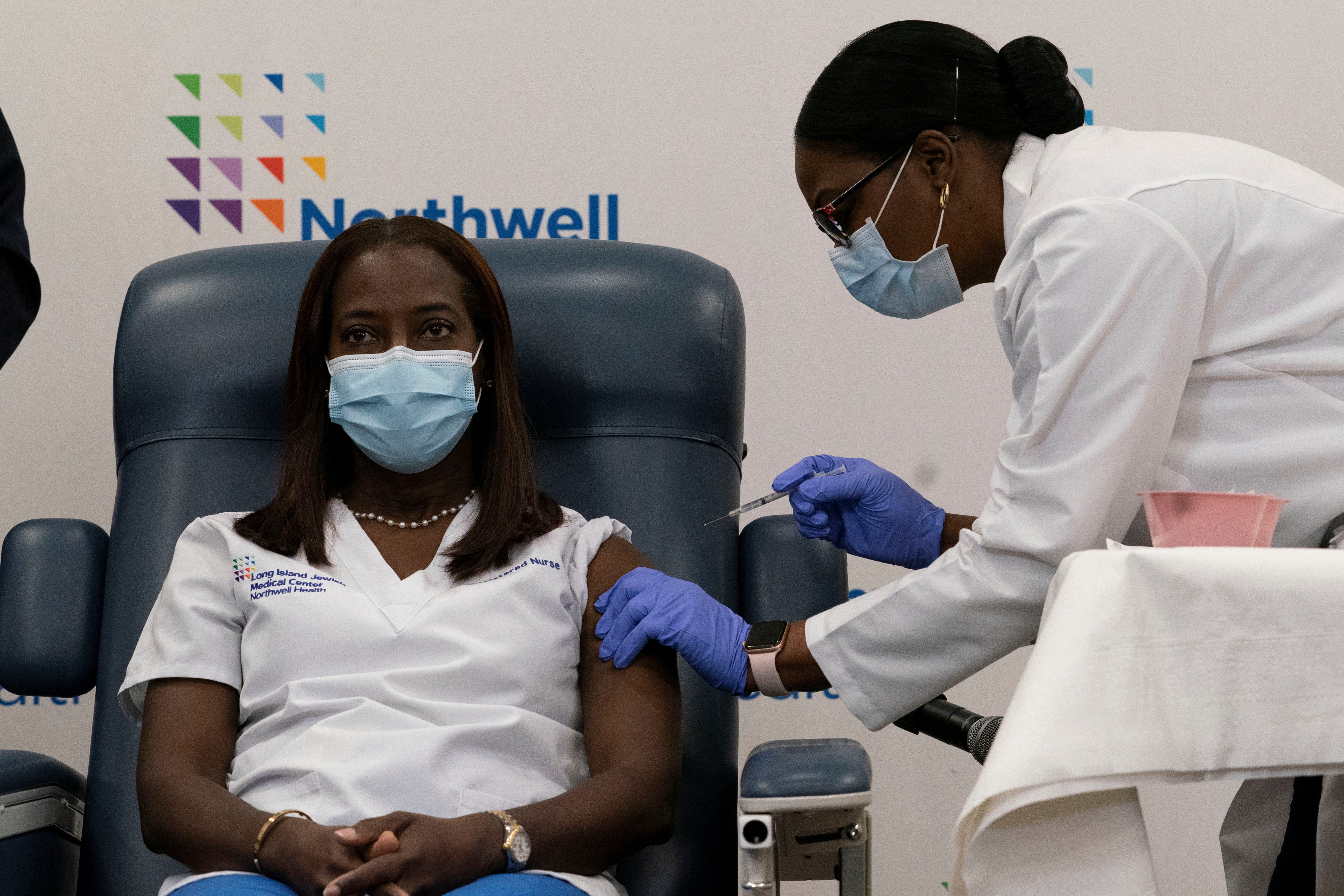 The new document issued a set of objectives, particularly around making the vaccines "available and accessible to all."

Part of that process, the document said, would be to consider how to reward those who developed the vaccine and repay "the research costs and risks companies have taken on," while also recognizing the vaccine "as a good to which everyone should have access, without discrimination."

The document quoted Francis, who said in his Christmas message that humanity could not allow "the virus of radical individualism to get the better of us and make us indifferent to the suffering of other brothers and sisters," nor could it allow "the law of the marketplace and patents take precedence over the law of love and the health of humanity."

The dicastery and the academy said an exclusive focus on profit and commerce "is not ethically acceptable in the field of medicine and health care."

"Investments in the medical field should find their deepest meaning in human solidarity. For this to happen, we ought to identify appropriate systems that favor transparency and cooperation, rather than antagonism and competition," the document said. "It is therefore vital to overcome the logic of 'vaccine nationalism,' understood as an attempt by various states to own the vaccine in more rapid timeframes as a form of prestige and advantage, procuring the necessary quantity for its inhabitants."

The Vatican document called for the negotiation of international agreements to manage the vaccine patents "so as to facilitate universal access to the vaccine and avoid potential commercial disruptions, particularly to keep the price steady in the future."

Such an agreement, the document said, would enable governments and pharmaceutical companies to collaborate in the industrial production of the vaccine simultaneously in different parts of the world, ensuring faster and more cost-effective access everywhere.

The Vatican COVID-19 commission and the Pontifical Academy for Life also called for widespread campaigns to educate people on the "moral responsibility" to get vaccinated.

Due to the "close interdependence" between personal and public health, the commission and the pontifical academy warned that refusing to take the vaccine "may also constitute a risk to others."

Given the absence of an alternative vaccine that is not either developed from or tested on "the results of a voluntary abortion," the document emphasized that the vaccines currently available are "morally acceptable" and that moral objections one may use to refuse vaccination "are nonbinding."

"For this reason, such refusal could seriously increase the risks for public health," especially when some people, like those who are immunosuppressed, can "only rely on other people's vaccination coverage (and herd immunity) to avoid the risk of infection," the document said. As a result, a rise in infections would increase hospitalizations, "with subsequent overload for health systems, up to a possible collapse, as has happened in various countries during this pandemic."