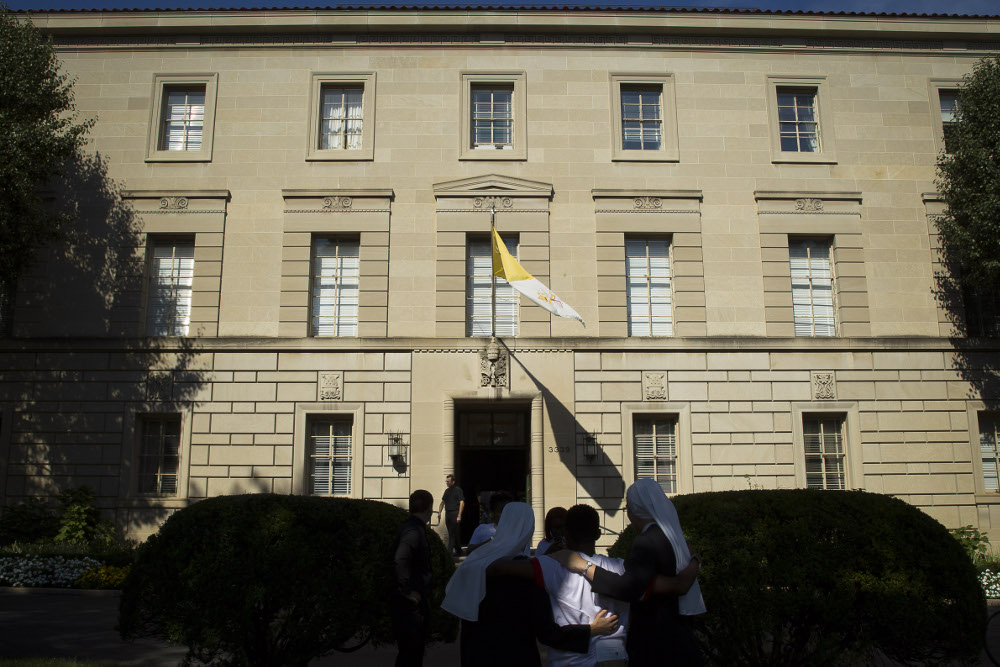 People are seen outside the Vatican Embassy, or apostolic nunciature, in Washington in 2014. A member of the Vatican diplomatic corps serving in Washington, Msgr. Carlo Capella, was recalled to the Vatican where he is involved in a criminal investigation involving child pornography. An arrest warrant has now been issued for Capella in Canada. (CNS photo/Tyler Orburn)

An arrest warrant has been issued in Canada for Msgr. Carlo Capella, the Vatican diplomat recalled from service in Washington in late August, who already was the subject of a Vatican criminal investigation involving child pornography.

Capella had worked since the summer of 2016 at the Vatican nunciature in Washington. Prior to that, he worked on the Italy desk at the Vatican Secretariat of State. He was ordained to the priesthood in 1993 for the Archdiocese of Milan.

Although the Vatican has not publicly confirmed Capella's identity, it did not object when many news outlets identified him as the Vatican diplomat recalled from Washington.

The Vatican press office said Sept. 15 that the Vatican was notified Aug. 21 by the U.S. Department of State "of a possible violation of laws relating to child pornography images by a member of the diplomatic corps of the Holy See accredited to Washington."

"The Holy See, following the practice of sovereign states, recalled the priest in question, who is currently in Vatican City," the press office said.

The Associated Press reported that the State Department confirmed it had asked the Vatican to lift the official's diplomatic immunity. It said that request was denied.

The Vatican promoter of justice, the chief prosecutor for Vatican City State, "opened an investigation and has already commenced international collaboration to obtain elements relative to the case," the Vatican said.

The Vatican press office declined to comment on the Windsor police statement.

The statement said that "in February of 2017, the Windsor Police Service Internet Child Exploitation Unit received information that originated from the Royal Canadian Mounted Police National Child Exploitation Coordination Center indicating that a suspect in the city of Windsor had allegedly uploaded child pornography using a social networking website."

The Windsor police launched an investigation and "were granted judicial permission to review records related to the involved internet service provider address," the statement said. The investigation "determined that the alleged offenses occurred between Dec. 24-27, 2016," at a Windsor church.

Canada's CBC News quoted a spokesman for the Diocese of London, which includes Windsor, confirming "that it was asked to, and did, assist in an investigation around suspicions involving Msgr. Capella's possible violations of child pornography laws by using a computer address at a local church."

Nelson Couto, diocesan spokesman, said that at the request of police, the diocese would not comment further.