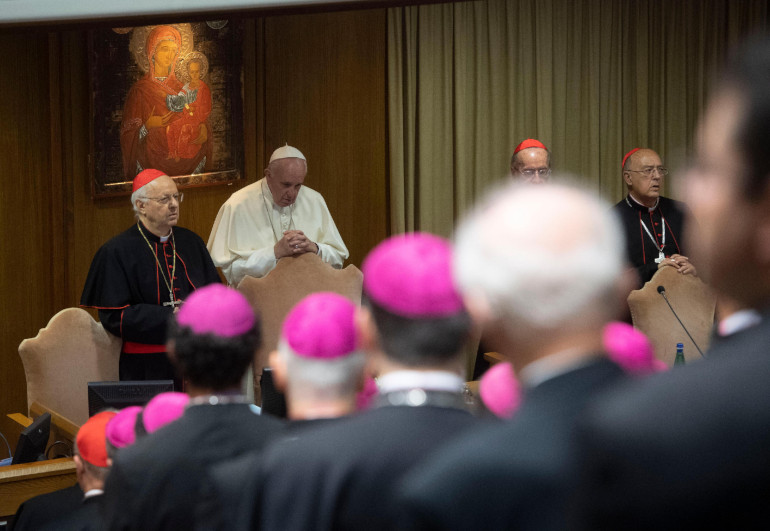 The Vatican's Congregation for the Doctrine of the Faith directed the world's Catholic bishops July 16 to investigate claims of sexual abuse against minors even when they appear unfounded, reminding the prelates that failure to do so can lead to their removal from office for negligence of duty.

In a new handbook outlining step-by-step how bishops and religious superiors should investigate reports of abuse by clerics, the congregation also appears to make the Vatican's first blanket request that church officials forward all such reports to civil authorities, including in countries where that is not required by law.

The new document, known in Latin as a Vademecum, is not a series of laws or norms. Cardinal Luis Ladaria, the head of the doctrinal congregation, likened it in a statement to an "instruction manual," meant to help bishops understand the specific procedures they should follow in receiving and investigating abuse claims.

The text, organized in a question-and-answer format over 16 pages, also gives a first-of-its-kind detailed description of the steps the congregation takes in evaluating the reports on abuse it regularly receives from bishops.

Bishops are told that all reports of abuse, even those that are vague or from anonymous sources, "should be appropriately assessed and, if reasonably possible, given all due attention."

On reporting to civil authorities, the text states: "Even in cases where there is no explicit legal obligation to do so, the ecclesiastical authorities should make a report to the competent civil authorities if this is considered necessary to protect the person involved or other minors from the danger of further criminal acts."

Francis previously mandated in his 2019 apostolic letter Vos estis lux mundi ("You are the light of the world") that all priests and members of religious orders are obligated to report any suspicions of abuse to their superiors. Although the pontiff said clerics must also abide by civil reporting laws, he did not mandate reporting to civil authorities where such laws do not exist.

"Pope Francis should order every church official to report allegations to civil authorities," she said.

"The Vatican often observes that such reporting could be unsafe in certain countries," said Barrett Doyle. "That doesn't mean a civil reporting requirement should be banned everywhere. The Vatican could specify those unsafe countries, and exempt bishops who work there from the civil reporting obligation."

Like the apostolic letter, the new handbook is the fruit of a summit on clergy abuse that Francis convoked at the Vatican in February 2019 for the heads of the world's various bishops' conferences.

Archbishop Giacomo Morandi, the number-two official at the doctrinal congregation, told in-house outlet Vatican News that the delay in publishing the new resource was due to the "extensive analysis work" required to collate all the various procedures bishops are expected to follow in abuse cases.

Beyond informing civil authorities of reports of abuse, the handbook also directs bishops to hand over any documents regarding abuse cases that are requested by them.

"Whenever civil judicial authorities issue a legitimate executive order requiring the surrender of documents regarding cases, or order the judicial seizure of such documents, the [bishop] must cooperate with the civil authorities," it states.

The handbook is initially being made available in six languages: Italian, French, English, Spanish, Portuguese, and Polish.

Under current procedure, once a bishop or religious superior receives a report of abuse by someone under their authority, they are usually expected to conduct a preliminary investigation of the complaint.

The results of that investigation are then forwarded to the doctrinal congregation, which can take a number of steps, including: imposing an immediate penalty on the official in question, initiating a juridical proceeding, or asking for further investigation.

The handbook is being sent out to bishops and superiors with a sample worksheet they can use to guide them in gathering the information required to fulfill preliminary investigations.

One area that remains out of bounds in terms of reporting claims of abuse is confession.

"It must be pointed out that a report of a delictum gravius received in confession is placed under the strictest bond of the sacramental seal," states the handbook, using the Latin term for "grave crimes."

"A confessor who learns of a delictum gravius during the celebration of the sacrament should seek to convince the penitent to make that information known by other means, in order to enable the appropriate authorities to take action," it states.

Vos estis lux mundi also established a new global system for the evaluation of reports that bishops have been negligent in their duties in reporting abuse, creating an investigatory process in which metropolitan archbishops can request authority from the Vatican to look into reports against bishops in their provincial regions.

In February, the Vatican also created a new "task force" of experts in clergy abuse to assist the world's local bishops' conferences in reviewing their child protection guidelines.