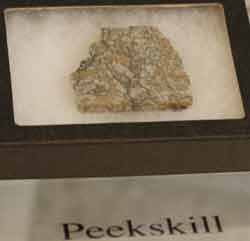 A piece of a meteorite that fell on a car in Peekskill, N.Y., in 1992 is displayed at the headquarters of the Vatican Observatory in Albano, Italy, Oct. 27. (CNS photo/Paul Haring)

VATICAN CITY -- Dozens of scientists gathered at a Vatican-sponsored meeting to fit together emerging pieces of a puzzle still waiting to be solved: whether there is life on other planets.

If finding extraterrestrial life is like "a detective chase, a crime to be solved, we're getting very close to the answer," said Chris Impey, head of the Steward Observatory and the University of Arizona's department of astronomy in Tucson, Ariz.

Impey was one of 30 high-level scientists attending a Nov. 6-10 study week on astrobiology sponsored by the Vatican Observatory and the Pontifical Academy of Sciences. He and others spoke at a Vatican press conference Nov. 10.

The astronomer said it is widely believed that life needs three basic ingredients: carbon-based material, energy provided by stars, and water, "which is one of the most common molecules in the universe."

"These three elements have already been found in a lot of places in galaxies," he said.

"The universe, if it's like a table, the table is set for dinner. Everything is there, all the ingredients are there" to welcome and support life, Impey added.

Until 1995, no one knew whether there were planets circling some of the billions of stars in the universe.

Advancements in planet detection have since led scientists to discover more than 400 planets outside of the solar system and dozens more are found each year, he said.

Jonathan Lunine, professor of planetary science and physics at the University of Arizona, said three or four worlds within the solar system also have conditions where life may be found.

More research into how the Earth and earthly life evolved is helpful in understanding what habitable worlds may look like, he said.

Discoveries of life in very inhospitable conditions on Earth, such as rock-eating microbes living deep beneath the ocean floor, show that different life forms may exist on other worlds, said Jesuit Father Jose Funes, head of the Vatican Observatory.

Athena Coustenis, a planetary scientist at the Paris-Meudon Observatory in France, said astronomers once thought almost all of the satellites circling Saturn "were dead icy worlds."

But space missions there have shown all of Saturn's major moons are actually "wonderful active worlds," she said, with one, called Enceladus, "spitting out its guts with water, liquid water, water vapor, organics and ammonia in these huge plumes extending more than 250 miles into space."

The evidence suggests that the jets originate in an underground ocean of liquid water, indicating that all the ingredients for life seem to be on Enceladus as well, she said.

Funes said that even though the study week looked exclusively at scientific evidence and theories, it was "very important that the church is involved in this type of research" looking at life in the cosmos.

He quoted Cardinal Giovanni Lajolo, president of the commission governing Vatican City, as telling participants that "truth from research cannot make us afraid; what is to be feared is error."

Science opens up the human mind to new knowledge and contributes toward the fulfillment of humankind, the cardinal said, according to Funes.

When asked whether God would have to be incarnated elsewhere if there were intelligent life on another planet, Funes recalled the parable of the lost sheep.

God's incarnation in Jesus Christ was a singular and "unique event not only in human history but in the history of the universe and the cosmos," he said.

The existence of evil and original sin on Earth meant God, the good shepherd, had to leave behind his entire flock to go get his one lost sheep, he said.

Impey said that whether there is extraterrestrial life or not, either scenario "is staggering."

"If the universe is abundant in life there is companionship in our future," he said.

But if space exploration after several decades turns up nothing, then it will help remind people that "this planet is rather special and so with that will come an extra obligation even if we didn't already feel it to care of this place and this special thing that happened here."