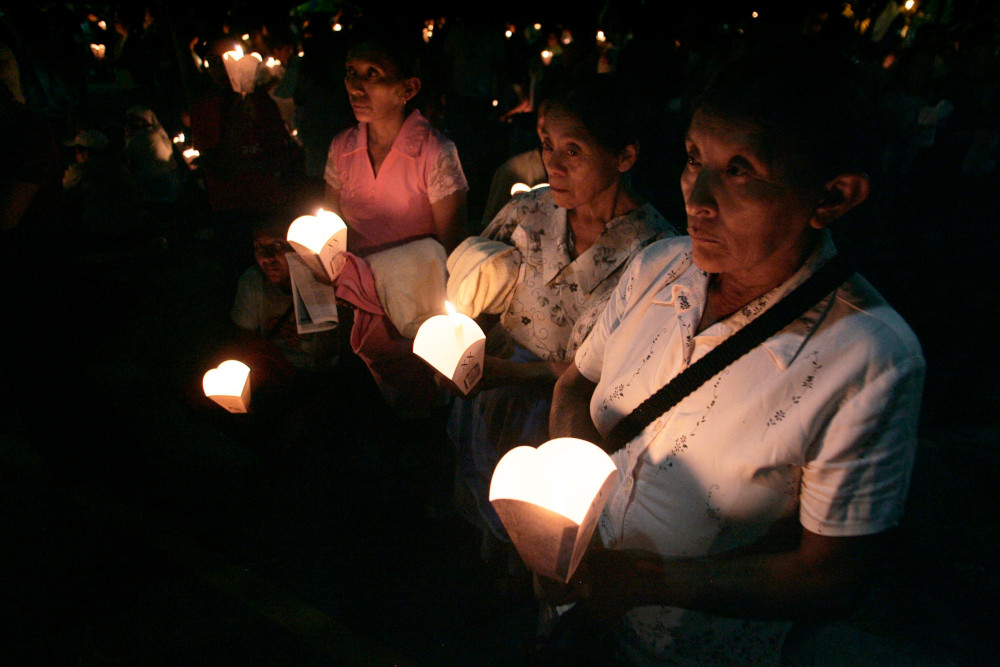 A file photo shows Salvadorans gathering during a candlelight service in San Salvador to commemorate the 1989 killing of six Jesuits and two women during El Salvador's civil war. On Sept. 11, 2020, a Spanish court sentenced former Salvadoran Col. Inocente Orlando Montano to more than 133 years in prison for his involvement in the slaying of five of the Jesuits. (CNS/Reuters/Luis Galdamez)

The recent conviction of a former Salvadoran colonel for the murder of five Spanish Jesuit priests during the civil war in El Salvador is a major step forward on the path of gaining justice and healing old wounds, Cardinal Michael Czerny said.

In a Nov. 16 message commemorating the 31st anniversary of the Spanish Jesuits, a Salvadoran Jesuit and two women, Czerny, undersecretary for the Vatican's Migrants and Refugees Section, said the conviction was also a "vindication for the victims" of the El Mozote massacre, in which 800 civilians were murdered by the Salvadoran army in 1981.

"In front of these events and the small steps that have been taken, it is worth remembering the words of Pope Francis in 'Fratelli Tutti,' his most recent encyclical: 'Goodness, together with love, justice and solidarity, are not achieved once and for all; they have to be realized each day,'" he wrote.

According to the United Nations, over 75,000 people died during El Salvador's bloody 12-year civil war, many of whom were killed by government-sanctioned death squads.

In a Sept. 11 Spanish court ruling, former Col. Inocente Orlando Montano, 77, was found to have planned and ordered the murders of the five Jesuit priests — all Spanish nationals — Nov. 16, 1989, at their residence on the Central American University campus.

Soon after the murders, Czerny, then a Jesuit priest, took over the position of one of the slain Jesuits, becoming director of the university's Human Rights Institute.

The court could rule only on the cases of the five Spanish Jesuits as a condition of Montano's 2017 extradition to Spain from the United States, where he was residing.

Montano, who appeared at his Madrid trial in a wheelchair, was sentenced to 133 years, four months and five days in prison — 26 years, eight months and one day for each murder.

In his message, Czerny said that while the anniversary of "our martyrs" comes in "a very different global and local context from previous years," it is nevertheless a reality that must always "be confronted with Gospel of Jesus Christ."

"We are in the midst of the coronavirus pandemic, which has forced us to change many of our social, economic, educational and religious practices, affecting without a doubt the poorest people and revealing the inequality and injustice that we already suffer," the Canadian cardinal said.

He also said the recent Tropical Storm Eta, which has devastated Central America, was "caused or aggravated by our irresponsible human activity toward creation" and serves as a reminder to follow the example of the martyred Jesuits who gave their lives in defense of the poor and the vulnerable.

Czerny said Christians may find the answers to the challenges facing today's society in the pope's recent encyclical on fraternity and social friendship.

"The Holy Father challenges us with the imperative that our martyrs also made theirs at the time and which we celebrate today," he said. "Only by identifying with the least ones will I become the brother and sister of all."