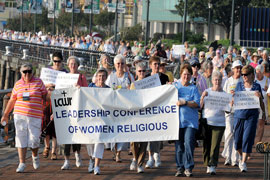 Members of the Leadership Conference of Women Religious march through Woldenberg Riverside Park in New Orleans for a prayer service to preserve the wetlands. The walk was part of the conference's 2009 annual gathering. (CNS/Clarion Herald/Frank J. Methe)

A Vatican doctrinal investigation of the largest leadership organization for U.S. women religious appears to have been complicated by the group’s support last March of health care legislation opposed by the U.S. bishops.

The Leadership Conference, along with a number of other Catholic groups, including the Catholic Health Association, disagreed with the bishop’s interpretation of the legislation, saying it did not allow for federal funding of abortions.

Last March, in the final days of a highly politicized health care debate in Congress, the Leadership Conference offered support to a Senate-backed House bill that eventually passed 219-212.

The Leadership Conference supported the legislation, saying it would bring health care coverage to an additional 30 million people.

President Obama signed the measure, the Patient Protection and Affordable Care Act, on March 23, leaving a visible rift between the bishops and women religious. The issues involved now appear to have gone beyond specific health care legislation to include the proper use of church authority, who can speak to moral and political issues, and the scope of constitutional rights of vowed religious.

Elements in these thorny issues have been thrown into the mix of the ongoing doctrinal assessment by Vatican officials of the U.S. women religious leadership, an internal Leadership Conference document indicates.

The Leadership Conference of Women Religious is an association of the leaders of congregations of Catholic women religious in the United States and claims more than 1,500 members, representing about 95 percent of the 68,000 U.S. women religious.

It was in February 2009 that the Vatican Congregation for the Doctrine of the Faith, headed by U.S. Cardinal William Joseph Levada, sent a letter to the conference, announcing the doctrinal assessment. Levada cited Vatican doctrinal concerns with the conference dating back to 2001.

The Levada letter set no timetable for further discussions or resolution of the issues involved. The outcome of the assessment could have a significant impact on the future of the conference and, in turn, the leadership of U.S. women religious communities, possibly leading to Vatican demands for new methods of communication among women religious or even new structures of leadership.

However serious the outcome of the doctrinal assessment could be, it has received relatively little public exposure in large part because the process has been overshadowed by a far more public Vatican investigation of U.S. women religious congregations, which was initiated two months before and is now in the second year of a three-year process.

This second Vatican inquiry, officially called an apostolic visitation, was announced in December 2008 and involves the nation’s apostolic religious communities. This investigation is being carried out by the Vatican’s Congregation for Institutes of Consecrated Life and Societies of Apostolic Life, headed by Slovenian Cardinal Franc Rodé.

When Rodé’s congregation first announced the study of U.S. women religious communities, it cited as reason falling numbers within them and a need to determine their “quality of life.”

Whatever the Vatican intentions, many U.S. women religious have seen this probe as an affront. They say they were never consulted, were never involved in its planning or execution, and will not be allowed an opportunity to refute allegations before the report is passed along to Vatican officials for consideration and possible action.

Meanwhile, the Leadership Conference of Women Religious has been tightlipped about the Vatican probe into its conduct. Asked by NCR for information on the Vatican study, the conference issued a short statement confirming the dates it had met with church officials, while adding that it has been cooperating with them, answering all questions regarding its “practices and policies.” The conference confirmed it had met with Vatican officials in Rome in April 2009 and April 2010, and with church officials in November 2009 in Washington.

Once informed of the Vatican doctrinal assessment in March 2009, the conference informed its members, sharing with them the cardinal’s letter and their initial response. NCR obtained copies of those letters at the time.

According to Levada’s letter, the Vatican study became necessary after the conference failed to respond adequately to concerns expressed by the Vatican in 2001. The Levada letter cited three areas of doctrinal concern: women’s ordination, the primacy of the Catholic faith, and homosexuality.

Levada designated Toledo, Ohio, Bishop Leonard P. Blair, a member of the U.S. bishops’ Committee on Doctrine, as the lead bishop in the study.

Following the Leadership Conference officers’ meeting with Vatican officials last April, it sent out a letter to its membership, updating them on the conversations. NCR obtained a copy of that letter.

The conference’s letter informed its members that a meeting the women had April 23 with Levada and members of his staff focused on two topics: the Leadership Conference’s support of the health care reform bill and the status of the doctrinal assessment.

Describing the gathering as “frank and open,” the leadership team wrote that it had insisted at the meeting it does not support abortion, but did support the idea of speaking out on a political issue.

“We clarified that LCWR does not support abortion and that we have made this position clear,” the letter said. “We explained that we feel a moral imperative to see that there is health care coverage for all persons, and that we believe this bill will guarantee that more than 30 million uninsured persons would finally be provided health care.” The letter added: “We were very clear in stating that our actions were not in opposition to the U.S. bishops.”

The Leadership Conference told its membership that Levada was concerned that the organization’s actions “were being interpreted as a public display of disunity within the church and that they undercut the perception of the church as one, holy, Catholic, and apostolic.”

The conference said it responded, speaking of the necessity to be able to exercise “rights, duties, and obligations as citizens.” The letter stated that Levada acknowledged women religious operate in two worlds -- as Catholics and as citizens. However, he insisted that the bishops are the ones who make key decisions in matters of faith and morals.

The Vatican requests, the letter stated, caused the women to ask if the process “had moved beyond an assessment and into an investigation of LCWR.”

The letter did not indicate how Levada responded to the question.

Levada told the women, the letter stated, that once Blair sends his final report to the congregation, his assessment will be sent for review to different groups, including “a subcommission, the American cardinals in Rome, and perhaps some others.” Levada explained he will then consult with Rodé and develop a final report that will be presented to Pope Benedict XVI.

Blair’s diocesan director of communications, Sally A. Oberski, said the bishop has a policy of not speaking with the media about the assessment.

According to the letter, the leadership team met the next day, April 24, with Rodé and members of his congregation. Again, Vatican officials queried the women about the conference’s support for the health care legislation.

The meeting moved on to discussions about the apostolic visitation and to a Leadership Conference statement approved at its 2009 national assembly in New Orleans. That statement, “LCWR Call,” was intended to set a five-year course for the organization.

“We discussed at length the LCWR support of the health care bill. The cardinal stated his belief that we cannot defend our position because it was contrary to the bishops,” the letter went on. “We again clarified that we do not support abortion and that we are quite aware that we are citizens of our country who must take action, and we base our actions upon our understanding of all the moral imperatives brought to the table within this particular piece of legislation.”

The letter said Rodé instructed the women that “LCWR cannot declare a pastoral direction since this responsibility belongs to the episcopal conference alone and, he noted, that by our actions we broke unity. We reiterated our view that we do not support abortion and our belief that the moral imperative of providing health care for more than 30 million uninsured was an action we had to support.”

According to the letter, the women noted “some the benefits we have experienced [in the apostolic visitation], including the support and appreciation women religious have received from the public, as well as the opportunity to learn more about the rights and duties of religious within the church. We also noted that the process has caused confusion among our members because neither we nor the U.S. bishops were well-informed about all aspects of the apostolic visitation.”

The letter stated Rodé spoke of “his serious concern over the many congregations that did not complete the entire apostolic visitation questionnaire.”

It stated that a doctrinal congregation staff member, Passionist Fr. Leonello Leidi, reiterated that Mother Mary Clare Millea, in her position as apostolic visitator, “is the vicar of the pope,” and that the actions of some religious communities that did not fully comply in answering visitation questionnaires last year were acting in “open opposition” to Rome.

The letter stated that Leidi spoke of “possible consequences for leaders who may be judged as disobedient.”

The women religious leadership team asked Rodé what he hoped would be the final outcome of the visitation, the letter noted.

“He responded by saying that he understands that women religious have historically worked for migrants and persons who are poor, and acknowledged that we have built schools and hospitals and have provided services to many people. He expressed a desire to get a clear, objective view of religious life as it is lived today and that a focus be placed on values, life in community, prayer, and living the evangelical life.”

The letter stated that the meeting ended with the cardinal making two recommendations: that the Leadership Conference of Women Religious be clear about its position on abortion, and that it invite members to collaborate with the apostolic visitation process.

“He again stated that LCWR has influence and we must use it to support the church and its efforts. He further indicated that he has spoken with Pope Benedict about the apostolic visitation and noted that the pope is concerned and may be making a statement about the process or may ask Cardinal Rodé to issue a statement.”

The letter ended with the leadership team saying it will keep members informed about other aspects of the visit.

[Thomas C. Fox is NCR editor and can be reached at tfox@ncronline.org.]