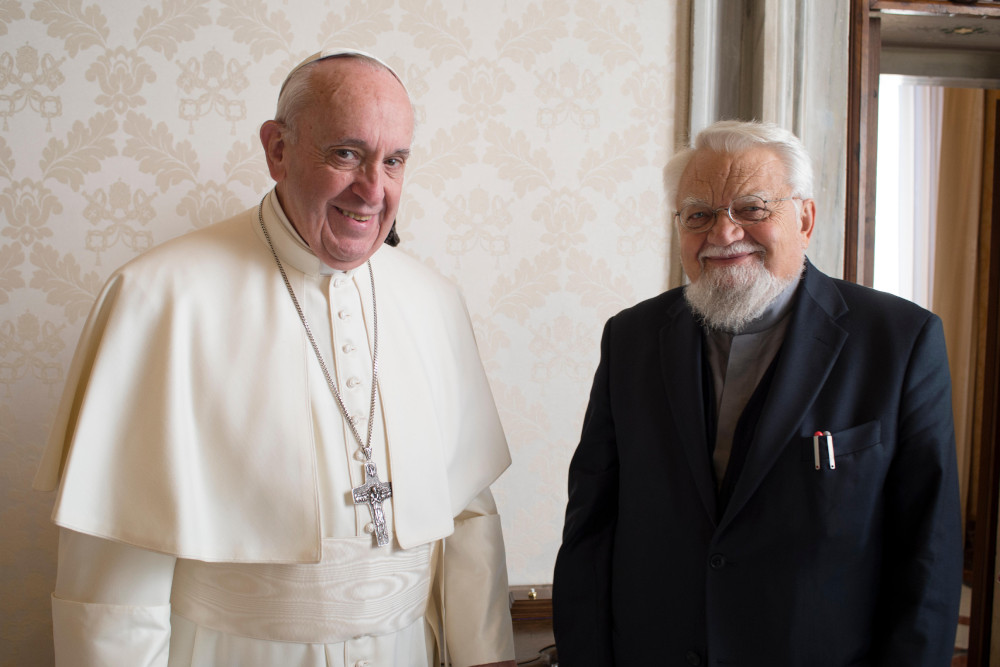 Pope Francis is pictured with Enzo Bianchi, founder and former prior of the ecumenical Monastery of Bose, at the Vatican in this Jan. 12, 2019, file photo. Following an apostolic visitation of the northern Italian monastery, the Vatican has ordered Bianchi and three other members to leave the community. (CNS/Vatican Media)

The Vatican has ordered Enzo Bianchi, the 77-year-old founder and former prior of the ecumenical Monastery of Bose, to leave the community following an apostolic visitation to clarify leadership within the group.

Bianchi, who founded the monastery in 1968, stepped down as prior of the community in January 2017.

In a statement reported by the Italian newspaper La Stampa, Bianchi said that he knew the transition could be difficult, which was why "I was deliberately more absent than present in the community, mostly living in my hermitage."

"I suffered from not being able to make my legitimate contribution as a founder anymore," he said. However, he added, he never interfered with or contradicted the decisions of the new prior, Luciano Manicardi.

While pledging always to be "obedient to the will of Pope Francis," Bianchi said he had asked the Vatican to let him know what he was accused of so that he could defend himself, and he asked the Vatican to assist members of the community in reconciling with each other.

The community, living a monastic life of common prayer, work, study and hospitality, is made up of 80 men and women from a variety of Christian traditions. They are particularly known for ecumenical conferences and liturgical studies.

In December, the community announced that Francis had appointed a three-person team to conduct an apostolic visitation. The statement said it was prompted by a moment in the monastery's life "that could not be anything but delicate and, in some ways, problematic as regards the exercise of authority, the handling of governance and the fraternal climate" among the members.

The monthlong visitation began Dec. 6, 2019, and a report, "based on the contribution of testimony freely given by each member of the community," was given to the Vatican, the community said.

With the approval of Francis, the community said, Cardinal Pietro Parolin, Vatican secretary of state, signed a decree dated May 13 ordering Bianchi and three other members "to separate themselves from the Monastic Community of Bose" and move out of the group's headquarters in northern Italy.

The community did not identify which of the four refused to leave.

Bianchi, in a tweet May 24, wrote: "What is decisive for determining the value of a life is not the quantity of things we have accomplished, but the love with which we lived through each of our actions. Even when the things we created end, the love will remain as their indelible trace."